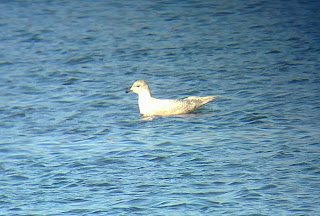 After waking up to find it was an incredibly sunny day I decided to get over to Ditchford Gravel Pits to try and find any white winged gulls. A juvenile Glaucous and Iceland Gull was reported as being present all day yesterday, and as I still need Glaucous for my life list I got to the site fairly early to try and get it. Things were fairly quiet on the walk down to the lakes with a single Great Tit, Blue Tit and female Chaffinch in the hedgerows and a female Reed Bunting in the phragmites on the western part of the fishing lake. A small flock of Lapwing were in the adjacent fields with a solitary Pink Footed Goose and a redhead Smew also in the area. The lake that normally holds the gulls was still half frozen over and gulls were everywhere, so I began the long task of going through them. Unfortunately despite a 2 hour search no white wings could be seen, then a Peregrine passed over and most of the birds flew into the field to the north of the site. A quick look through these was unproductive too. The light was now creeping around infront of me so I walked round to the other side of the complex so the sun was behind me, and at last I managed to get a juvenile Iceland Gull (see pic above and vid below)

I waited a further hour constantly going through all the other gulls as they arrived but the search proved fruitless and the Glaucous never made an appearance. Never mind it doesn't pay to see it all in one day and the Iceland Gull was a cracking bird to see as it showed really well for about an hour before it joined the throng of birds on the ice and disappeared amongst the masses. It seems I'll have to wait a bit longer for Glaucous it seems, but not a bad day at all.
Posted by David James at 16:51