Today was a very good day, and it was good for a number of reasons. We saw the bird we was looking for, the weather stayed good, we all met up with old friends and its the start of the twitching season again! Reports had been coming through of a Little Bittern at Titchwell reserve in Norfolk since friday and as it was a bird I was still hoping to see and with the added bonus of Big Jake and me being able to catching up with close birding buddy Kieran it was a too good an opportunity to miss. So at 6.30 in the morning I was outside Big Jakes house ready for to drive to Norfolk. We arrived at approx 8.15, and soon made our way over to where the bird had been reported - in the reeds surrounding a small pool near the coast path just as you leave the woodland section near the visitor centre. There were already about 40 birders there, with some already having put in over 2 hours of searching in vain. I stood up on the bank in a gap whilst Big Jake popped himself further along on the bench to look down the pool side. Then the waiting began. During this time Kieran had joined in the hunt and we all ( I say all, probably 30 out of the 40 birders were more content to talk instead of actually look for it) searched the base of the reeds for 2 hours before Kieran unfortunately had to leave to pick a scope up from a nearby village. Then after about 2 1/2 hours of peering into reeds I noticed Big Jake waving at me and pointing at the side of the pool. I rather recklessly abandoned my scope and ran a long the path to join him, to be greeted with the sight of a tiny Little Bittern preening itself almost right out in the open. The reeds it was in were almost under my feet from where I was originally standing so after all that searching it was about 5 yards away from me all along tucked up and invisible in the undergrowth. It sat for quite a while in a round opening in the reeds and by now Jake had his scope on it so full frame scope views could now be had too. Perfect!! Unfortunately as always in these events a few people decided to get just that little bit too close and it crept back into the vegetation and disappeared. Al this happened in Kierans absence so I quickly got in touch to let him know  what area it was in and myself and Jake headed down the path to the beach. Both the fresh and salt marshes seemed quite barren which is uncharacteristic of this site in September and the lack of yesterdays Buff Breasted Sandpiper was a slight disappointment but after the views we'd just had of the Little Bittern we would still have left happy even if we didn't see a single bird for the rest of the day. The best we could do sea watching was a single Manx Shearwater along with lots of migrating Knot and Sanderling, with a few Curlew and Blackwits thrown in. So as the wind was getting stronger we decided to head to the cafe for a coffee meeting the just returned Kieran on the way to hopefully hear that he had seen it. By the time we had got back to the Little Bittern site well over a hundred people had arrived to see it. 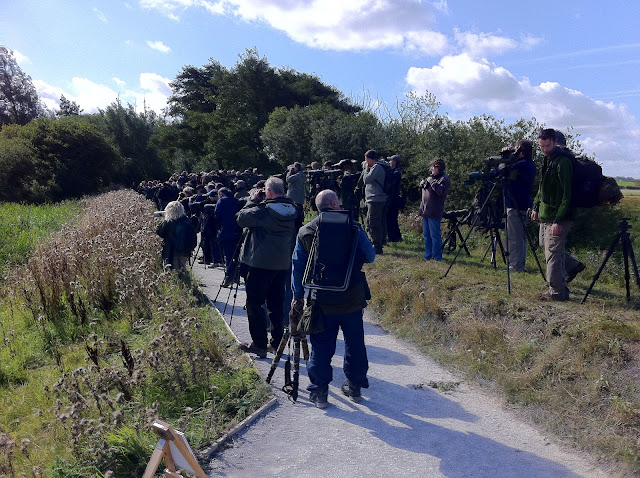 I am pleased to say that he and Leila (his partner) had both seen the bird. For a lot of people twitching is a competitive sport, where the idea is to see more birds than those around you - but I certainly don't hold to that, and after some of the twitches that Kieran and I have gone through together it just doesn't seem right not to have him see it too. We all then headed to the cafe where we spent the next couple of hours chatting, reminiscing, drinking coffee and eating. It was good to have us all back together again, it's just a shame Pete Bateup and Matt couldn't be here to have us all together but there's always another day. A very good day indeed! 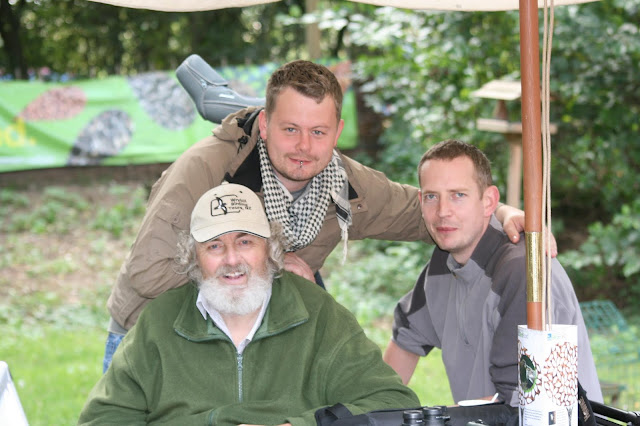 Big Jake (the one with the beard sitting down), Kieran Nixon (the one standing at the back), and me (the ugly one on the right)
Posted by David James at 19:12 No comments:

A nice surprise today considering I was working. Most days I drive down the M1, and just north of the Newport Pagnell Services there is a small river with a lake which is always full of birds so whenever I am passing I normally always have a quick peak down there to see if anything is about. I'm pleased to say that today there was!! Standing just slightly north of the river in a field was a Great White Egret, and despite driving (slowly) on a motorway at the time I got some quite good views of the bird. Not a bad van window tick!!
Posted by David James at 18:29 No comments:

It has been a while since the last post, mainly due to me being very busy doing other things and also the mid summer lull where things tend to go a bit quiet. Highlights of July and August have been a drake Ferruginous Duck at Paxton, Ruddy Shellduck at Grafham Water at the start of August and a return to Grafham at the end of the month for a juvenile White Winged Black Tern. That has pretty much been it bird wise so I was looking forward to getting out today after the recent heavy rain to see how things are moving along. I decided to pop over to Pitsford Reservoir for a quick wander round and even from getting out of the car things looked good with waders along the shoreline and literally masses of Hirundines whirling around in the air. A Hobby came charging through a collection of House Martins scattering them all over the place and also spooking the Lapwings along the bank into taking flight. I scanned across the water from the feeding station picking up a Black Necked Grebe just off a spit of land seperating the Walgrave and Scaldwell Bays. This bird was still showing signs of summer plumage which was nice as this is the only resident British Grebe I was yet to see in breeding refinery so it was nice to get a look at it in this mornings sunshine. Further along the shoreline 7 Ringed Plover were busy feeding along the shoreline along with 5 Greenshank and 3 Common Sandpiper along the stretch leading up into Scaldwell Bay. The wildfowl numbers of all regular species now really increasing, with large numbers of Shovelor and Pochard in particular, also the Slavonian Grebe that has spent the latter half of summer here was still showing very well feeding in the bay - but now unfortunately it has moulted and now looks like we are more accustomed to seeing them in the winter. The hides at the end of the bay overlook the mud flats and on here 8 Green Sandpiper and 10 Ruff could be seen feeding amongst the vast flock of Lapwings. All this was seen in just an hour and a half walk, so there must be a lot more to see if a full circuit was made. I'll be off to Norfolk at the end of September so this has certainly whetted my appetite. Hopefully a sign of things to come -  let the migration begin!!.
Posted by David James at 11:25 No comments: