It has been a good month so far with some very good birds. The run of good luck started right from the beginning after I received a text saying a Cattle Egret had been seen at Summer Leys. It was getting dark when I was told but despite this I shot over to the site (meeting up with the county bird recorder Mike Alibone when I was there) but unfortunately after a thorough search we couldn't find it. The following morning it was relocated and watched by various people pretty much all day, so straight after work I jumped in the car and made my way over. The bird was being very mobile and kept flying from field to field but luckily another birder had told me the fields it liked to frequent so I headed to the first place and couldn't see it. I walked across the road and walked along the Nene River along Hardwater Lake scanning the banks but could only find Little Egrets. Luckily I turned around just in time to see a birder was standing by the road trying to get my attention and after legging it back saw the Cattle Egret in the field where I had initially looked - it must have flown in as my back was turned. This was a fantastic looking bird as we don't often see Cattle Egrets at the best of times but to see one in all the breeding refinery like this was a real treat! The pics are Iphone digiscoped and really don't do it justice but trust me it was gorgeous. 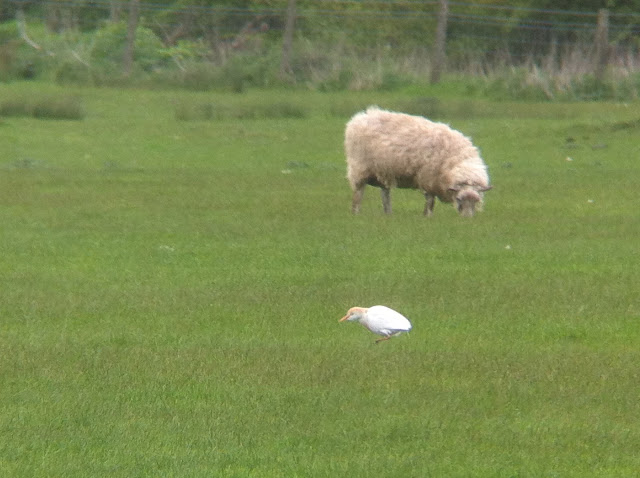 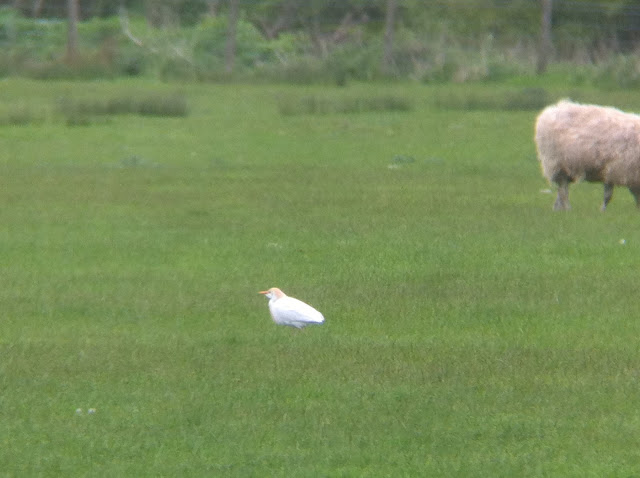 My next day off work was the 4th and I turned my attention to a certain Black Winged Stilt that had eluded me over the last few weeks. One was located in Oxfordshire a short time before and it then went to Rutland Water before heading to a place in Lincs near Peterborough and then setted at Frampton Marsh. This was another lifer for me but I couldn't really warrant driving all the way to Frampton to see it, but it disappeared from there and the next thing we know a Black Winged Stilt is sighted at Paxton Pits in Cambridgeshire. This was good as it's not that far for me so first thing in the morning I'm in the car heading for the Cambs border. The whole country had suffered a deluge of rain in the weeks leading up to this weekend which caused a lot of localised flooding. This meant the normal route along the side of the reserve to the field east of the Pumphouse Pit was impassable, so I had to divert up to the other end and come in from the Buckden. It didn't take long to reach the area and a quick stop for directions from smiling birders coming the other way (they had already seen it!) got me to the place I needed to be and right infront of me busily feeding away was the Black Winged Stilt. Nobody can really decide if this is the Frampton bird or a different individual, infact this was the main topic of conversation while I was there but I wasn't too bothered about that - I just enjoyed the view! 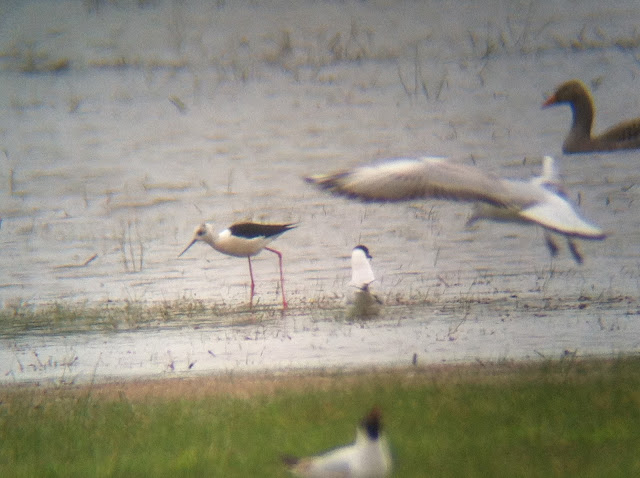 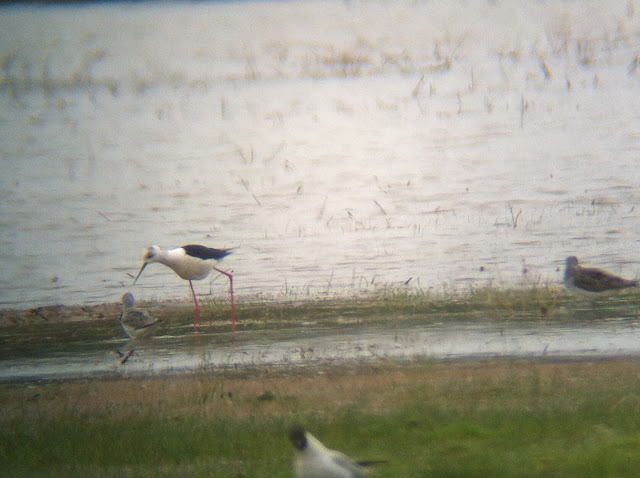 After this I headed up to Leicestershire with a Savi's Warbler on the hit list. This bird had been found in the morning near the Lapwing Hide at Rutland Water and by driving up the A1 didn't take me long to get there. the area the warbler was reeling from is a small patch of reeds on the other side of a 6ft fence, which didn't bother me to much as I'm tall enough to see over the top of it but the other guys had to stand on a section leaning over slightly. It was reeling like mad when I got there and I managed a quick glimpse of the bird while it was creeping about in the reeds. Then as it moved further into the reedbed I moved along the fence and was greeted almost straight away by a view of the Savi's Warbler reeling away right out in the open - sometimes there are benefits to being tall. I headed back to Northants after this and went to Summer Leys to see if the Cattle Egret was still about. 2 Black Terns on the main lake was a nice bonus before I bumped into Big Jake who mentioned a Great White Egret had paid the reserve a visit earlier that day. So parking up at Hardwater Mill (where I had seen the Cattle Egret a few days before) I walked along the river towards Mill Lake. A Hobby flew gracefully overhead and as I reached the banks of Mill Lake a large white bird could be seen wandering along the reeds - the Great White Egret was back in the same place we had seen it a few weeks ago! As I walked back the Cattle Egret came onto land on the bank Hardwater lake too, this was amazing I had a Great White Egret to my right and a Cattle Egret to my left!!!
The following day was the trip to Minsmere I had planned for a while. A couple of friends of mine, Julie and John came with me and we were not to be disappointed. A few days before our trip a Long Billed Dowitcher had been found on a reserve near Bury St.Edmunds and as it was on the way it was definitely going to be the first twitch of the day. The directions weren't very clear which lead to us starting off at completely the wrong end of the lake but after we soon realised our mistake we made our way to the area we needed to be in. There right out in he open with a head under it's wing was a sleepy Long Billed Dowicher! Good stuff but we wasn't going to leave until we got a better look at it so we waited patiently for it to wake up. Luckily it did after about 15 minutes and fed along the shoreline giving some great views at quite a close distance. Bizarrely it slept right out in the open but when it fed it did so under cover so getting pics was a bit hit and miss. John Friendship Taylor managed to get this one with it was ducking and diving in and out of the vegetation. 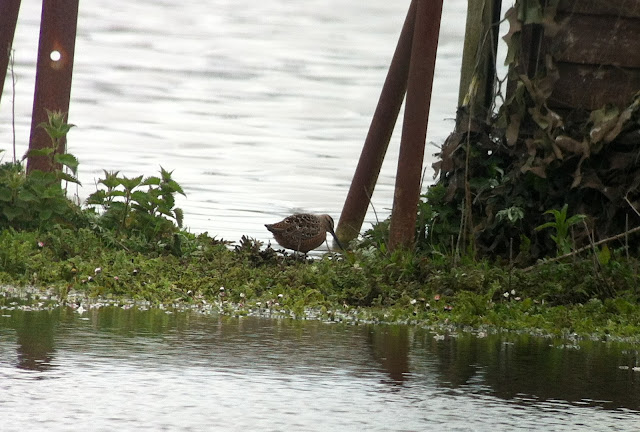 And I got this one shortly after it had woken up and was having a preen. 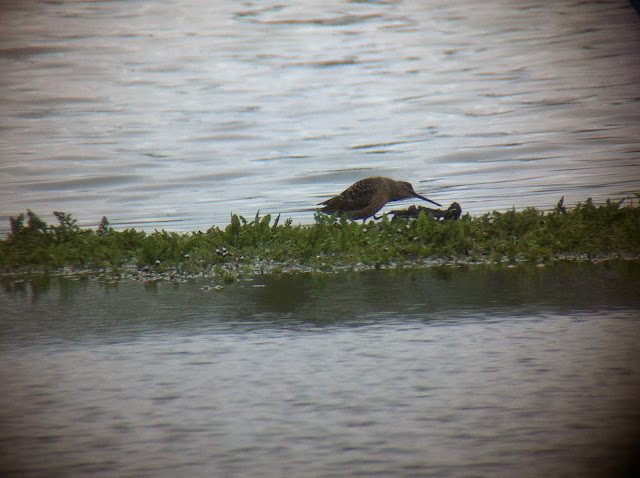 From here we went to the RSPB's brilliant reserve at Minsmere. Straight from the car we went to see the Wryneck that had been reported recently as this was a lifer for John. It was being a bit slippery to start with but luckily a couple of birders had seen it n a completely different place to the one where everyone else was looking and we saw it high up in a tree. After this we had a wader around, on the scrapes not much was happening to the recent flooding but a few Little Terns and a summer plumage Knot were nice additions. We walked along the beach and up to Dunwich Heath where we had the most amazing and prolonged views of Dartford Warblers I think I have ever had. The weather wasn't too good so my hopes weren't high but after finding a small dip 2 Dartfords could be heard singing away and after a short search could be seen showing really well. 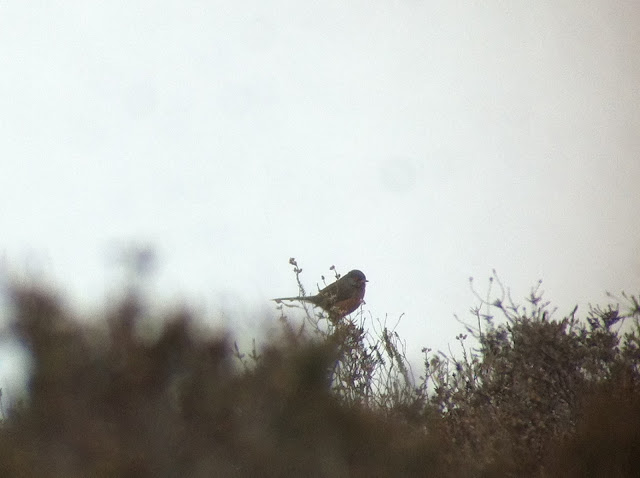 One of the birds flew and posed quite comically almost doing the splits between 2 pieces of Gorse and luckily quick off the mark John Managed to get this pic! 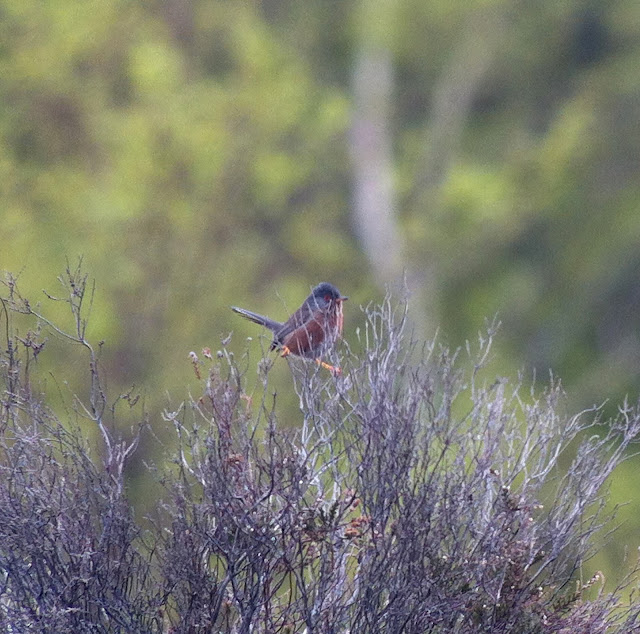 We walked back to the reserve proper and this time got some really good views of the Wryneck showing back it had previously been reported in a large open area with a large gorse bush in the middle. Despite the attention it was getting it was remarkably well behaved and showed well the whole time. 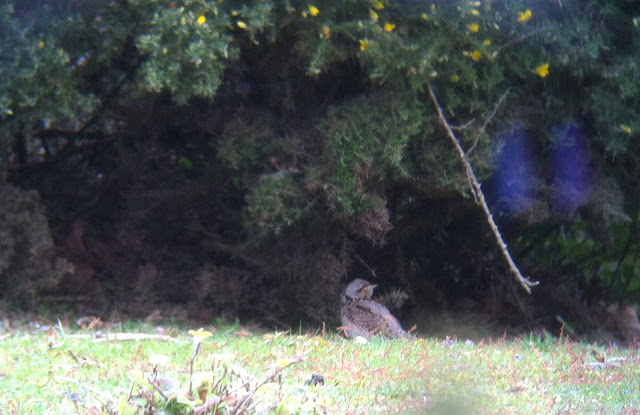 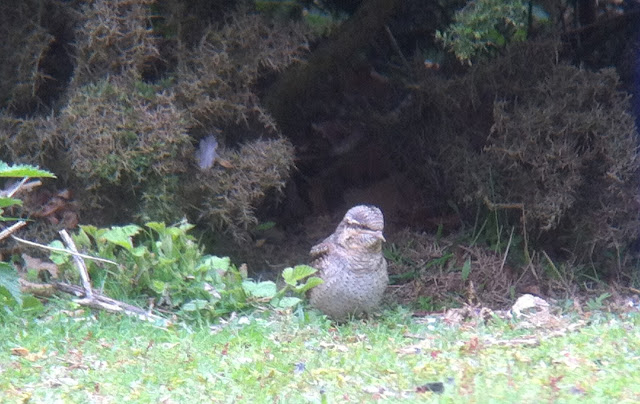 Then to the Reddbed hides for unbelievably close booming Bitterns - one must have only been 50ft away from the hide at one point and despite the noise in the hide from the many birders the noise was quite loud! Marsh Harriers were of course putting on a good display as they always do here and Water rail were squealing in the reeds. When we came out of the reedbed area we went to see another couple of unexpected additions to today's list. We had heard rumours of Stone Curlew being seen nearby and as it's a pair I am not going to tell you exactly where but it's not on the reserve itself. We found the area without any problems and it was a nice surprise to see a male Ring Ouzel in the field too. John Taylor took this great photo of the Rouzel while I ran up the field to locate the Stone Curlew. 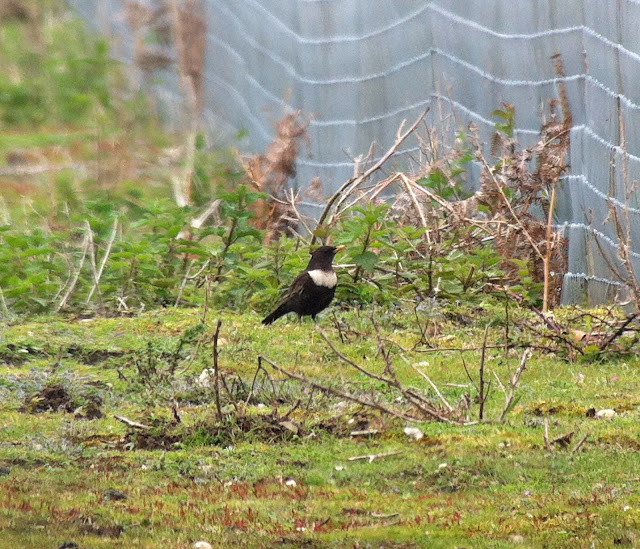 After enjoying good views we headed back to the reserve and enjoyed the rest of the day wandering around, had great views of a Black Redstart in the car park after John spotted it on a fence and going to places no one else would cos we were the only people wearing wellies (remember the flooding) before settling down at dusk to enjoy the serenade of booming Bitterns. Here's a pic of Julie and John having a paddle - this was the only way down to some of the hides!! 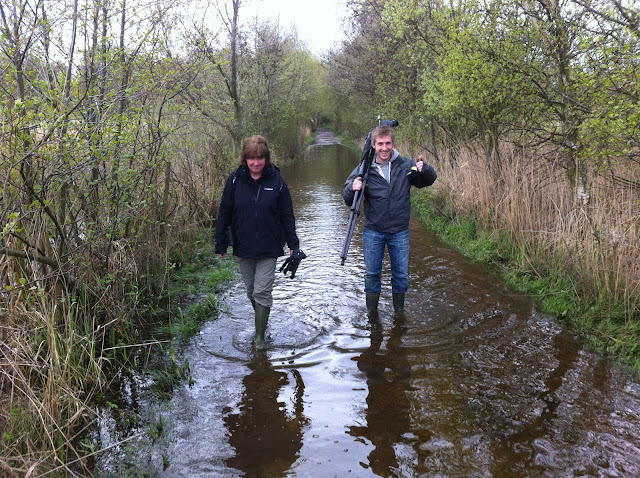 The latter half of the week didn't go so well. I missed a Dotterel by an hour but got good views of a Nightingale at Polebrook Airfield.


It's best to view to vid above full screen and on the highest quality - you can just see the Nightingale in the middle and after the first burst of song it moves slightly up and left before flying right down to the bottom and out of sight before carrying on singing. I returned to Polebrook the week after and also managed to add Turtle Dove to the county yearlist there which along with a lovely looking Little Stint at Summer Leys mid week now bring the list up to 151. Great stuff, now lets see what the rest of the month has to offer!