I am quite often asked when I meet up with people out birding where I get my information from and how I am sometimes lucky enough to get some of the images I have in the past. I have decided to put everything I do in this post in a hope that perhaps it will help others to achieve the same and use the latest technology to help them become better at watching wildlife here in the UK.

Technology has advanced so much over the last decade that it has been quite hard to keep up with it, but it is very easy to use it to our advantage so long as we know what we want to get out of it. I now use an I Phone4 and to me it is a tool to help me in my hobby. No longer is a phone just a phone, it's a device that constantly streams information and I will admit that sometimes I need it and sometimes I don't but nonetheless the information is there straight away whenever I need it - literally at arms reach. I am sure that other smartphones will do the same job but as this is the device I have been using for a while, this is the one I shall be referring to in this post.

Free Bird News
Information regarding birds and other wildlife has been the lifeline to many people who want to enjoy the "unusual" but aren't quite in the "clique" as they say. By this I mean in birding and any other wildlife watching it can be quite hard for people new to the hobby to see unusual things may turn up. A lot of bird sightings used to be passed word of mouth so if you didn't know the right people then you may only hear about it few days later, by which time of course the bird had normally vanished. To some extent this is still the case but luckily nowadays things are slightly different. Most bird clubs have their own websites with regular sightings pages - and this is the first tip - bookmark all of these in your surrounding area and visit them regularly. The down side to this is these sites are quite often updated at the end of the day so the next tip is to get yourself a Yahoo account and then search the Yahoo Groups for all birding groups in and around your area. When you join, normally after they accept you, set up your account so you get an individual e-mail for every single posting (this means when someone posts on the group you will receive an e-mail showing the posting). Then on your phone go the e-mail account settings and type in your Yahoo details, ie log in on your name and password and hey presto! All the e-mails from all different groups will be sent to your phone whenever you need it. I personally have all the Northants, Bedfordshire, Cambridgeshire, Buckinghamshire and North Bucks e-mails now sent straight my phones e-mail account so after pressing a couple of buttons they're all there. The likes of Birdguides and Rare Bird Alert get their information through these too so by checking it regularly you can get the info you need before they do.

Subscribing to Bird Info Services
The likes of Birdguides and Rare Bird Alert have been invaluable to a lot of twitchers and birders who want to "tick" or learn from rare birds. I tend to only "twitch" birds I can learn from, what I mean by this is I normally only chase birds that may turn up on my patch so I have more of an understanding of what I am looking at - I twitch to hopefully become a better birder. Of course this ethic can all go out the window when things like Sandhill Cranes arrive in Suffolk but as a rule I try and stick by my principles. Over the last year Birdguides and Rare Bird Alert have released I Phone Apps to give out rare bird news and in my opinion they aren't really worth spending the extra subscription on. I will say that after trying them both the rare Bird Alert App is a hell of a lot better than the Birdguides App, there is much more info at your finger tips with RBA - but to me the crucial thing is you can't access either of them without having enough phone signal to get onto the internet. So what is the problem? I hear you ask, just have a look when you have a better phone reception. The thing is though, if you have better signal why not just bypass the phone app and go onto the website itself? This is the main reason why I tend to use Birdguides News. Its not because of when the news "breaks" so to speak it's because I find that more information is displayed better on my phones display than RBA. Both the Apps when you subscribe to them only offer the limited info on the Apps themselves as oppose to the whole websites information which the I Phones Safari web browser is more than capable of coping with itself. So in short I find it better to subscribe to the site itself and just use my phone to browse that.

Bird Identification
One thing I will say in Birdguides favour though is their Identification App of British Birds is absolutely superb, with excellent photos and illustrations - but for me most importantly is the inclusion of the birds songs and calls. This feature to me is almost worth the money alone - which is about £12 from the App store. Also I like to save bookmarks of a few websites on the Safari browser - one of the best being Birders Playground. this site is set up by a photographer who has one of the best selections of Gull photos I have ever seen in one place, with a lot of the birds seperated by age which makes comparison easy in the field (so long as you have the signal of course). I have also put the British Bird Songs cd's  onto my phones music library which has also saved the day a couple of times in the field when a call is heard that you don't recognise. A few birders I know also attach a speaker to their phone in order to either use the Birdguides Id App or songs recorded onto their music library for the purpose of tape luring - I remain open minded to this but obviously it depends on your individual politics in such matters if you use it for that purpose or not.

Navigation
The I phone has a very good internal mapping system but it has one major drawback - it uses the internet to load up the maps which is quite often not much good as birds tend to turn up in "out of the way" places where a phone signal is non existent. This can be overcome however, but at a price. Download the Outdoors GB App (about £5) and then go into the store - from here you can download Ordnance Survey Maps. A 1:50 size map for a region will set you back about £10, but this is A LOT of mapping. The regions you buy can be things like the whole of the East of England etc. I have downloaded onto mine the East of England and the East Midlands, this has cost me about £20 but if you pop into your local outdoor shop and ask for the separate maps it will cost you a hell of a lot more. As Northants is my own county I have also bought the Northants 1:25 map too - these are a lot more expensive at £30 but again the way to look at it is if I were to buy the maps themselves £30 would only get me 2 of them whereas here I get them all. Of course these aren't really much good for orienteering or of course if your phone breaks of runs out of battery you'll be lost but for  and navigation you need to do thats not too demanding these are perfect. The maps are saved to your phones memory too so you don't have to worry about signal and also the phones GPS will show you exactly where you are on the map and what direction you are travelling in. It is in effect a handheld GPS system that would normally set you back a few hundreds of pounds all for about £50.

Digiscoping
Another big bonus with these, or any other smartphone, is the camera. Phone cameras used to be very basic but gradually this is now not the case. There's is 2 ways I approach digiscoping with the phone but lets make this clear I am not going to win any awards doing it - I just do it for record shots so if you do want fantastic results it would be best to get a proper set up. The first technique is to simply activate the camera and place it over the eyepiece of the scope, you will normally have to zoom in tad to get rid of the dark ring around the lens. This will take a record shot of what you want but one I thing I have discovered is the second technique. The HD video recording facility I find takes better images than the still camera itself so what I do is set the camera up in video mode and place it over the eyepiece again, zoom in and start to record a video of the bird. Then when you taken the video you are happy with open it up in VideoPix (another App from the App store), this App lets you capture freeze frame images from moving videos. This is great as you can playback the video in slow motion until you find the composition you want and then just press a button to save as a picture. You can then or course use your phones e-mail service to attach the pic and e-mail it to the county recorder or put it on facebook etc in seconds after actually seeing it. Here is an example of a digiscoped picture of a Glaucous Gull taken using my old phone (Sony Ericsson Vivaz) to show what results you can achieve with a little patience. 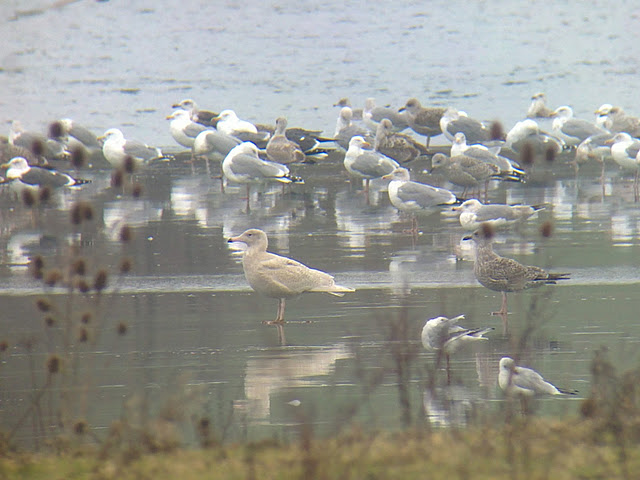 If You Have A Scope Use It
Sounds simple doesn't it? Sometimes though it is easy to get lazy and thoughts start going through your head that it won't be worth lugging all that weight around so you leave it in the car. This is what happened to me a few months ago. I had a walk around Harrington Airfield in the morning with a friend of mine and didn't see much to exciting so we then went to a local reservoir and had a long walk around that carrying the scope and from there we went and had a couple of beers in a local pub. When we left we decided to pop back to Harrington Airfield just to kill a bit of time if nothing else and as I'd been carrying my scope about all day and was no doubt a little bit lethargic after a lunchtime pint I left the scope in the car. Stupid mistake as this was the time I found a Great Grey Shrike, which posed very well in front of us on a number of occasions before more people turned up and it became very mobile after the that - the moral of the story is though if I had my scope with me I could've digiscoped some superb pics of the bird but as I was lazy and left it in the car I haven't got any to show you.

In conclusion this post just shows some of the many ways technology can help you in your hobby. If I find out any more you'll be the first to know.
Posted by David James at 16:34 1 comment: