I have already heard a Quail this year at Chelveston Airfield but as it was very close to the county border I have been a bit unsure whether to add it to the county yearlist. The comments by well regarded birders did reassure me it was in the county but according to my ordnance survey map the bird I heard was just slightly on the wrong side of the line. So with this in mind when I received a text so say that a Quail had been heard in Northants  recently I didn't take much convincing to go. Quail chasing in September is not something to be taken lightly as they should have stopped calling long ago, and to add to it I didn't get to the site until midday so I knew it was going to be a long shot as early morning or late evening is normally best. The bird had been heard the previous morning at Stanford Reservoir (again right on the Northants border but this one was definately in Northants) and despite the odds stacked against me I waited patiently by the field it was heard in. After just over an hour of listening a single "wet my lips" called out from the middle of the bean field - and that was it. I stayed for another half an hour or so but gave up on hearing it again. Normally I wouldn't post about this sort of experience as it is a little dull I admit but the thing I would like to share is the little lady I found on the way to the Bean field with the Quail in it. As I walked up the road towards the footpath an insect caught my eye so I had a closer look. A Bush-Cricket was hopping out into the road and after a little chasing I finally caught it. The colours were quite bright which is what originally made me look twice at it. 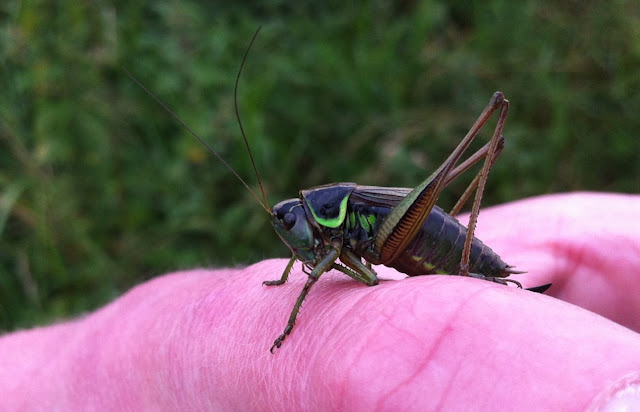 I certainly do not confess to be an expert as this sort of thing so after taking a couple of pics I went home to identify it. Turns out this is a female Roesel's Bush -Cricket, I have certainly never seen one before. According to the Wildlife Trusts website they were only found on the south coast up until the early c.20th and due to rapid expansion they are being seen further north now. Which is good as I would never have encountered it if it hadn't. The long curved ovipositor at the back show it to be a female and the green face, dark brown/orangey legs, and the green line along with the 3-4 greenspots behind the head are all distinguishing characteristics of the species.I know I sometimes seem to be mainly bird orientated in my wildlife watching but I enjoy seeing it all, including the bugs, after all a lot of the smaller things that we pass by  without noticing have incredible stories too! 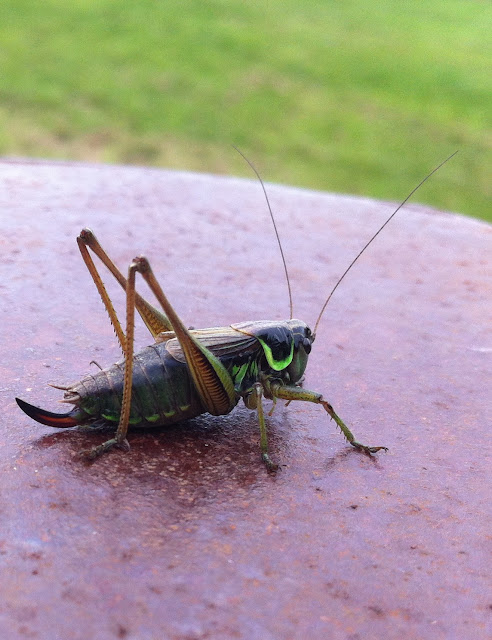