Apologies for being a bit quiet on here recently but pretty much all of my spare time has been spent building up the year list. Just about every evening over the last few weeks has seen me shooting off somewhere straight from work to see a new bird that has been found. The last update I posted regarding the yearlist was on the 20th February and I am pleased to say I am starting to get up some good numbers. Most of the time has been spent catching up with birds that I have missed due to working full time and with the exception of Brent Goose, Crossbill and Curlew I am pretty much on target. Since my last update good county birds have been Slavonian Grebe, Avocet, Little Gull, Garganey, Bittern, Lesser Spotted Woodpecker, Pink Footed Goose, Great White Egret, Common Redstart, Ring Ouzel, Arctic Tern, Black Redstart and the latest Pied Flycatcher which brings the current list up to 127 species so far seen this year. The Slavonian Grebe took some work as it was very mobile as did the Great White Egret which has been present for a while but keeps flying up and down the Nene Valley making catching up with it a nightmare. I got very lucky with Bittern as I only had to wait half an hour before it crept out onto my side of the reeds at Summer Leys giving great views of it fishing, and the Lesser Spotted Woodpecker which flew right in front of me and landed on a branch just 20 feet from where I was standing. The Ring Ouzel was a sigh of relief too and they had turned up while I was in Norfolk chasing a Hoopoe (see previous posting), and although I did bird the area the following morning my cold had started to get quite bad so I had to give in and head home. Luckily a very helpful young lady (Kirsty) tweeted me in the afternoon to say her and her partner had found one so I shot straight over and connected. Here's a pic taken by her partner Jon Philpot. 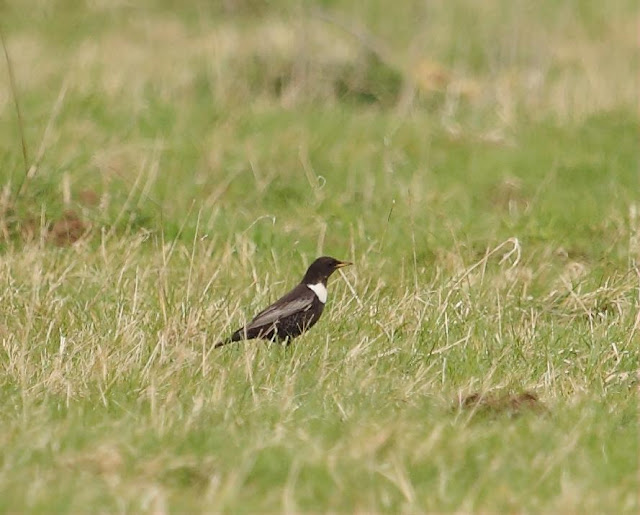 The Black Redstart proved to be quite easy too as it flew up on top of a post as I walked away from the car after getting the tip off of it's location from local county birder Eleanor Mcmahon and then the Pied Flycatcher was showing very well too at nearby Daventry Country Park. Unfortunately I'll have to leave this post there as the suns shining and I've got some birding to do, sorry it's a bit rushed but duty calls! I'll be updating again as quick as possible!! Good birding all.
Posted by David James at 12:09 No comments:

Serin and Hoopoe at Waxham

Us birders often have what are known as "bogey birds". These are birds that seem just out of our reach a lot of the time and they vary from birder to birder. My previous bogey was Firecrest and it seemed that until last year there was a conspiracy against me in the Firecrest community to avoid being seen by me at all costs! Luckily though a trip to Lynford (see previous posting from last year) managed to get five of them with good views of three, so at that point my next bogey target turned to the Hoopoe. This is an exotic looking bird which comes to Britain quite regularly and to be honest shouldn't be that hard to see, but they have eluded me constantly for years. The last one I went for was in Norfolk and after driving all the way there it flew off - literally as I entered the car park! So as the news broke that one had been seen at Waxham in Norfolk I was in two minds whether to go. I kept an eye on the reports to see if it was hanging around and after a few days of it's presence I decided to go for it. I picked Pete Bateup up on the friday evening and we drove over to Kierans house near Norwich, after a few beers and a curry we hit the sack after setting the alarms for 5am. We found ourselves standing on the dunes at 6.30 in the morning the following day waiting patiently for the Hoopoe to appear. The area is a holiday camp with a selection of caravans to the left of view and a large open field with two buildings to the right - this open area was where the bird had been feeding. A Ring Ouzel was feeding away at the top of the field which did take our mind off the Hoopoe for a minute or so but then back to scanning the area. I have to admit I did have a sense of defeat right from the start as it had become very mobile over the last couple of days and my previous history with chasing Hoopoes was dire to say the least. To add to it I had woken up with a stinking cold so standing up here in the wind and the frost was getting difficult. I decided to head back to the car to stick some more layers on and while I was trying to find my gloves I got a text from Kieran saying simply "RING ME NOW". The Hoopoe had taken advantage of my absence to fly into the field (told you it was my bogey bird, it must have waited for me to leave!!) I ran back to our position to be greeted with a fantastic view of the bird feeding out in the open in glorious sunshine! Get in at last a Hoopoe. I put the news out on Birdguides to say it was still here and after a while a few more birders popped over to admire it too. Then as we were all looking at the target bird another birding was looking through the large Linnet flock that was also feeding in the field before exclaiming "Ive got a Serin in here", we all swung around the scopes and sure enough a male Serin was feeding right in the middle of the Linnets. Fantastic stuff, what a little gem to be seeing in this fabulous sunshine! I stuck the news of the Serin straight onto Birdguides and I'm pleased to say it hung around for a while given great views and sometimes coming in quite close but unfortunately the staff at the holiday camp were starting to wake up and a car drove across the field scattering the flock in all directions with some of the birds heading into the sand dunes and this was the last we saw of it. As we left quite a few guys were heading in to hopefully see the Serin with a guy saying he had heard it on the way and another 3 guys saying they'd seen it flying over the sand dunes. We wished them all good luck with finding it and made our way back to the car but not before recording a quick clip of why we came here in the first place.


We were in a bit of a loss as to where to go from here as apart from Ring Ouzels everywhere there didn't seem to be much out of the ordinary kicking about. We popped to Cley and got great views of Ringed Plovers and Avocets sweeping their heads back and forth through the water feeding away and then popped just inland to see a small party of 6 Ring Ouzels and then we went to the pub for a beer and lunch. Then to Titchwell which again was quite sparse, nice flocks of Sanderling on the beach and a lovely Spotted Redshank showing right next to the path. 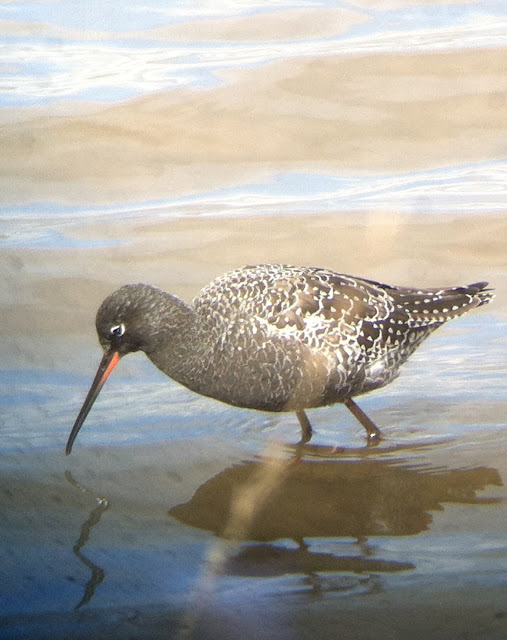 The day was now drawing to a close and we decided to head inland even further now to try and see a large flock of Ring Ouzel that had been reported at Syderstone Common. With the help of Oliver we got to the area we needed to be in and were greeted with the sight of a staggering 13 Ring Ouzels. 20 had previously been reported but we could only count 13 but still up until today I had only ever seen one in my life and already today we had counted 20 in different locations in Norfolk.

We started to head back after this spectacle, it had been a very good day with 2 life ticks in it for me too! You can never get tired of coming to Norfolk though and the added bonus of having good friends to bird it with too makes the day even better. To celebrate the Hoopoe and Serin sighting we took a group shot on the sand dunes at Waxham. Pete Bateup on the left, Kieran in the middle and me on the right. 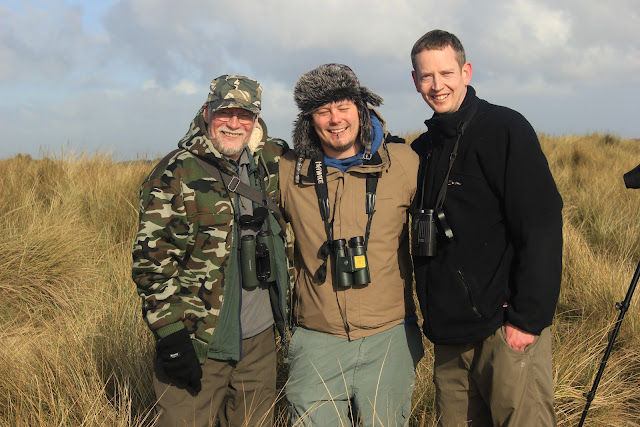