It was an odd day today. The original plan was a quick trip down to a site in Bedfordshire for Firecrest and then to spend the rest of the day in Northants to try and catch up with a Hen Harrier. Things didn't go to plan though and by 3o'clock in the afternoon I found myself standing on the beach at Titchwell in north Norfolk! John Taylor was joining me today and we had planned to visit a site down near Ampthill in Bedfordshire to try and find a Firecrest that had been reported mid week. We spent an hour or so scouring the area in an effort to see it but unfortunately to no avail, as we had got here quite early in the morning I started wondering if a trip over to Lynford Arboretum in Norfolk would be a good idea as Firecrest are pretty reliable here and over the last winter there have been some sizeable Hawfinch flocks in the paddock as an added bonus. We decided to go for it and just over an hour later we arrived at Lynford car park. A Firecrest could be heard singing near the road but we decided to head over to the paddock first as the Hawfinch are quite mobile so they should take priority in case we missed them. We didn't have to wait long at the corner of the paddock before I managed to find one concealed in amongst the branches of the Hornbeam Trees before it flew off, luckily 3 Hawfinch then returned not long after and we got some cracking views of them perched up in the tops of the trees. The trees around the small bridge near the paddock were playing host to quite a spectacle too, they were full of Crossbill with some of the birds coming right down to eye level with Lesser Redpoll and Siskin flocks thrown in too. We birded the whole of the site after this but once again drew a blank with a Firecrest sighting. We heard at least 3 but the weather was overcast and quite windy and it seemed everything was keeping it's head down. By the time we got back to the car we still had the whole of the afternoon ahead of us so we then decided to head up towards the coast. The drive took us through a lot of back roads with some nice views of Buzzard and a quick stop at Chosely Barns got us good views of 3 Corn Buntings in the hedgerows with mixed Yellowhammer and Reed Bunting flocks. The picnic area of Titchwell RSPB Reserve was the next stop with a scan through the Lesser Redpolls to try and find the Arctic Redpoll that has been here for a while. A group of birders were already on it so after looking in the direction they were looking picking it up was easy as a white bird was busy feeding up in the canopy. 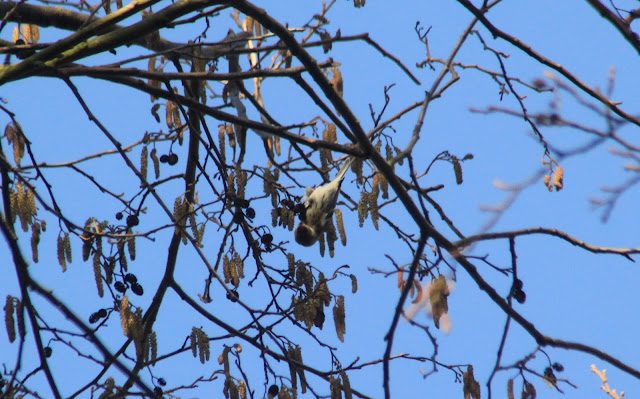 Then we had a quick bite to eat in the cafe and then headed down the path towards the beach. Pintail, Shellduck, Spotted Redshank, Avocets, Bar and Black Tailed Godwits were all easily seen on the way but it was the sea that was most rewarding with Long Tailed Duck, drake Scaup, Red Breasted Merganser and a close in Velvet Scoter spotted by John with a load of Goldneye. Lots of Sanderling were running up and down the beach with Knot, Dunlin, Oystercatcher and a few Bar Tailed Godwit along the shoreline too. A Marsh Harrier was spotted quartering the reedbed as we walked back to the car which was a nice end to our visit. As we were running out of time at this point we decided to start making the drive back home and as we had to pass the infamous Wolferton Triangle I thought we may aswell take a look down there. This area is home to Golden Pheasant, and I have tried to see one quite a few times but never had any luck. All the advice is to get here at dawn and drive around the roads hoping to glimpse one, but despite this I decided to give it a shot anyway. We drove along the north road and didn't see anything, then we turned and drove up the south road without seeing anything here either. I then went over the A149 and checked these backroads aswell before getting back to the north road of the triangle and giving it another go. As we slowly drove around a bend John spotted a long tailed disappearing into the undergrowth and as we pulled up nest to the area we could just make out a golden head creeping around in the thick vegetation. So I drove down to village and turned around heading back to the north road again, driving slowly along and luckily I managed to see the Golden Pheasants head poking out from under a bush. I pulled over, turned the engine off and switched off the lights before opening the window and sticking my camera out. We were then treated to an amazing view of an incredibly elusive bird! Getting any view of these cracking creatures is a privilege but to have one this close infront of us was something else entirely. As we sat there in the car he came right out and fed along the side of the road, the only downside though was it was starting to get dark and the lens on my camera couldn't cope with the poor light so the photos didn't come out too well but here is a record shot. The video I took though is a different matter and really shows off the birds plumage and is worth taking a look. 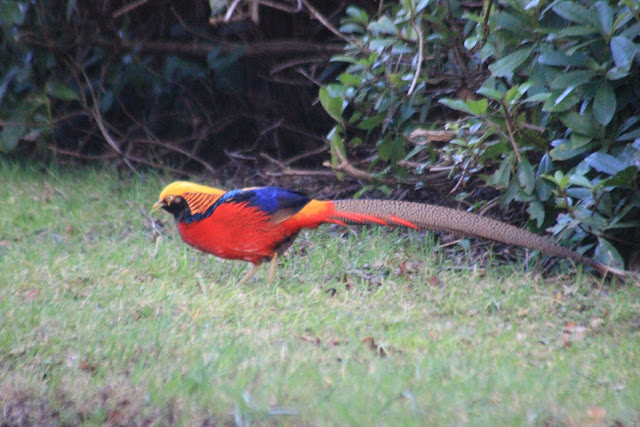 A brilliant end to a nice day out, even if it was a bit unplanned! Thanks also go to Kieran, Oliver and Rob who are Norfolk birders and through a few phone calls gave me some advice regarding Lynford and Titchwell.
Posted by David James at 14:00 No comments: