Spotted Crake, Merlin, and a Richards Pipit in Northants - another long awaited update.

Once again it has been a while since the last post. I have been very busy with "other things" and consequently  birding and blogging about it has had to take a bit of a back seat over the last couple of months. Things are getting back to a bit of normality now though so hopefully things will be back to normal. Still as always I have been able to grab the odd trip out to see some good birds despite the others things happening (my marriage and a house move!). I finally managed to see a Spotted Crake in the reedbed at Stanwick Lakes on the 13th September. Thus was a relief all round as I had spent several evenings in the this place in vain, getting a lot of mosquito bites on the way, after Stanwick Lakes patcher Steve Fisher had found one. In fact my back became the talking point of a few Northants birders due to it having 42 bites on it! Anyway most of the local birders gave up after a weeks or so of negative news so it was quite a surprise to receive a phone call saying a Spotted Crake was showing well a few weeks after the initial sighting. It's believed that this is a different bird to the previous one, and was a painful text to receive as I was at work at the time. I finished work as quickly as I could and managed to arrive on site just after 5pm to be rewarded with incredible views of the Spotted Crake walking about right out in the open in front of the reeds. After 45 minutes of very good viewing it crept back into the reeds again and then proceeded to show intermittently for the rest of the evening allowing a few more birders a look at it. The pics really not the best but you can just make out the bird in the lower left hand corner of the pic below. 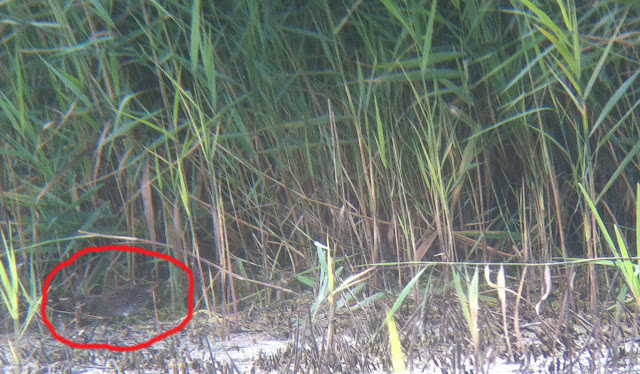 The next major outing was a quick trip to Norfolk (27th September) with my usher (Matt Whitelocke) to pick up the best man (Kieran Nixon) for my rapidly approaching wedding. We had a good day with some good birds, nothing major but the seawatching was superb with Arctic Skuas, Bonxies and a Sabine's Gull drifting around. At this point I got married, had a few days away and then proceeded to move house. On the 6th of October while I was taking a break from lifting heavy boxes I received a text from the county recorder, Mike Alibone, to say a Richard's Pipit had been found at Borough Hill near Daventry. I knew that if I didn't go for it I would almost certainly miss the bird, so with a quick explanation to my new wife (and a lot of convincing) I shot over to the Hill to be greeted with a large area covered in long grass. It was clear from the outset that this was not going to be easy! Chris Coe, a local birder, was just returning to his car and pointed in the general direction to where he had last seen it fly. By now quite a few other birders had arrived so we decided to split up and search the area. We trudged around hoping to hear the distinctive call and after an hour of fruitless searching I decided to head over to a field just down the slope where it had been seen in the morning before relocating to the top of the hill. A pipit was showing nicely perched up on the top f one of the bushes but this turned out to be a Meadow. Pangs of guilt were now setting in as I should really be moving boxes into the new house, so I decided it just wasn't mean to be and started heading back towards the car. I crashed through a hole in the hedge and as I got back onto the hill I could see a load of birders running down a path shouting to another birder near to them that the Richards Pipit had flown into the field I had just come from - the little sod must have flown into it as I walked out! So getting back through the hole in the hedge I got back into the field and started walking along the path. Within a few minutes a bird flew up from next to the path on which I was standing and up it went calling with that distinctive call. Richard's Pipit in the bag, a county and a life first! Unfortunately when it flew up it didn't stop and went up higher and higher before heading over in the direction of the car park. A Meadow Pipit shot up and had a go at it and they both appeared to drop but a search of the general area did't re-find it. The next couple of weeks were spent moving yet more boxes and settling into the new area. As things are now getting slowly back to normal I spent a day out with birding pal John Friendship Taylor. A Merlin had been seen on the previous day at Harrington airfield so we headed there first. Visible migration was superb with Redwing and Mipits flying overhead. It wasn't long before a single Golden Plover rose up from the field and called as it circled, below it a sleek bird was shooting across the field - the Merlin was showing well! In fact it showed very well as after it had gone across the field it proceeded to sit on top of the wires next to the road and fanned it's tail out while preening. This area had lots of birds in nearly every bush, lots of Yellowhammer and Linnet with the odd Reed Buntings thrown in too. "Eagle eared" John picked out a Brambling calling from one bush and after a bit of searching we located a female Brambling with the Chaffinch. From here we headed to Stortons Gravel pits as a few Beerded Reddling had been found in the morning but unfortunately they had gone quiet by the time we got there and we had to give up as the wind was picking up. To add insult to injury Mike Alibone arrived on the site while me and John had gone to the local KFC for lunch and he had a Bittern fly in in front of him! Our next area was Summer Leys but we didn't see anything of note so we headed to Pitsford Reservoir. We spent quite a lot of time admiring the Black Necked Grebe that has been residing just off the yacht club, but other than that there wasn't much about again. Still a great day to be out and with the addition of the Merlin I am now on 165 for the county yearlist. 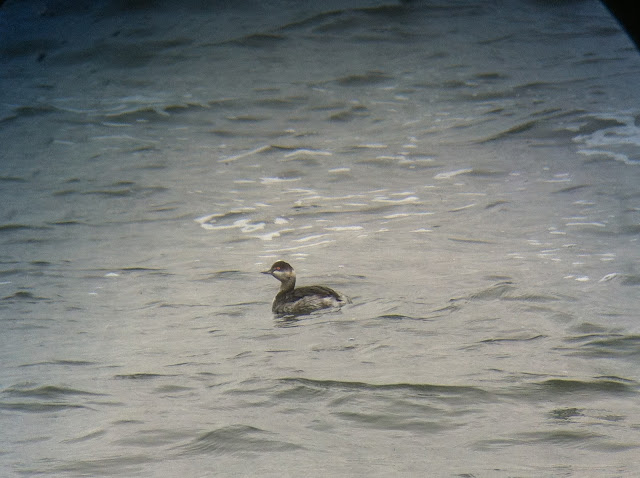 
As I write this huge numbers of birds are landing in Norfolk and will hopefully be making their way inland. Fingers crossed we will have some juicy rarities gracing the county. Until then though I shall be birding my new area, that being Grange Park just outside Northampton. There looks to be a lot of suitable habitat to be looking at so I will need to do a bit of exploring. One last thing, I guess I can't leave without posting a picture of me and my new wife after the wedding, this is probably the one and only time you will see me in a suit so take a good look as you probably won't be seeing it again! Good birding all! 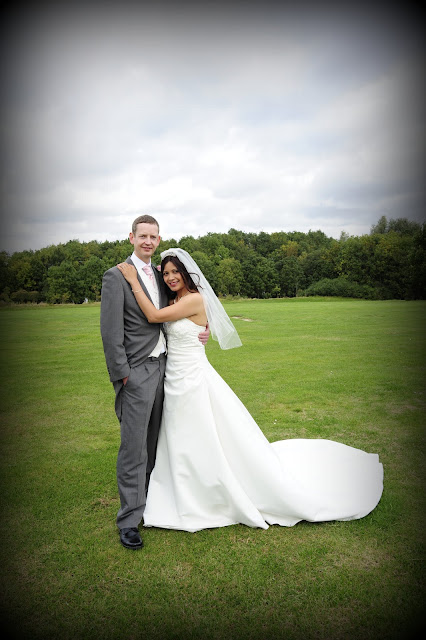