After yesterdays run of success I decided to have another bash for the juvenile Glaucous Gull that has been seen over at Ditchford gravel Pits. I popped here a few weeks ago and saw the Iceland Gull but dipped the Glauc. At first I started to wonder if I had made a tremendous error of judgement as the weather was a lot different than yesterday. It was very dull and cloudy, rain had started to fall and not to put to finer point on it it was flipping freezing. In fact even with 2 pairs of gloves the cold was still getting through, but even so I decided to do the site justice and spend some time here - you won't after all see Glaucous Gulls sitting at home in the warm! I walked along the river towards the viaduct where a group of Gulls had accumulated in the shelter behind an island. The lake started to freeze over again during this weeks cold snap and a lot of the Gulls were standing on this, so I started to work my way through them backwards and forwards as new Gulls kept coming in. Over a period of about an hour more and more Gulls were joining in and gradually the numbers were starting to get quite large but still no sign of the Glaucous. After 2 hours I moved scanned the birds from left to right constantly checking each one and then as I got to the end started scanning back.......but this time an enormous white winged Gull had landed right infront of me on the ice. Finally the Glaucous Gull was standing out in the open, it must have landed after I had gone through them as its hardly easy to miss. 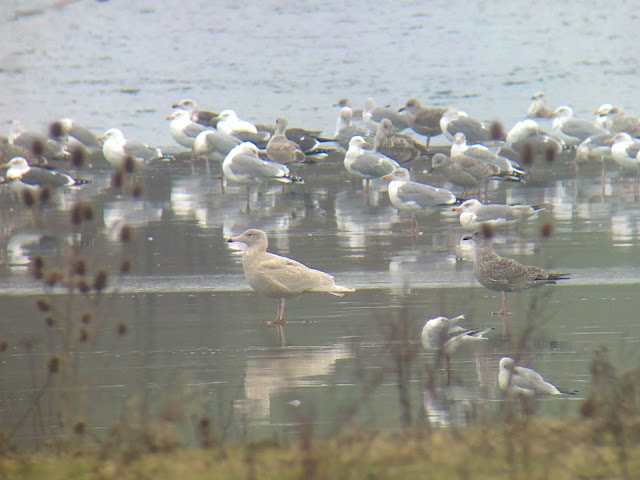 It showed really well out in the open and I managed to get a few record shots and a couple of digiscoped clips (see below)  before the cold got to me and I decided to get back to the car. An absolutely stunning bird, and as you can see from the scale its enormous.

Yet another good day, I wonder how long this run of luck can continue?