The news came out yesterday that a Great Northern Diver had been found at Caldecotte lake in Milton Keynes and as I had a day off today I thought I'd pop down to take a look. I've seen them many times before in Scotland but I've only had one down south (Pitsford Reservoir a few years ago) so it felt like a good time to catch up with one again. The bird has been fishing in a small bay on the north eastern side of the water almost in the middle of a housing estate and luckily it was still there this morning. So I found myself pulling up along the road to have a look myself. At first it couldn't seen but as anyone who has spent any time looking for Divers will know they can be surprisingly difficult to spot - due in main to the fact they spend a lot of time fishing underwater. In fact it took quite a while to finally see it, and when I did it had come up right where I had started looking in the first place so I must have walked passed it while it was submerged. I'd estimate it was spending at least a minute underwater and then only surfaced for about 8 seconds before diving again, and to add to it the bird would swim a long way underwater so it rarely comes back up anywhere near it dived. This makes getting a clip or pic a difficult and frustrating business - especially if you are like me and is trying to digiscope it by putting a phones camera against the eyepiece! Anyway I persevered and came up with a few results. Apologies for the camera shake in the clips but it was quite a chore getting these, at least they're short. Quite pleased with the photo - not bad for an IPhone. 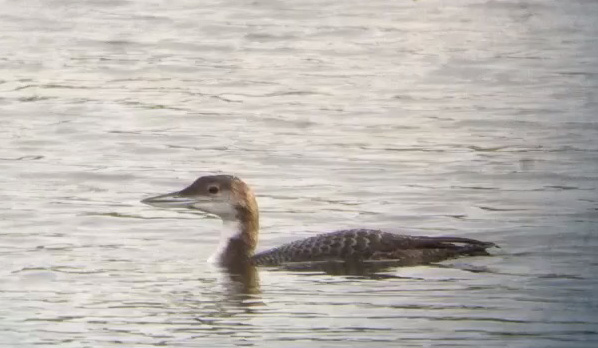 From here I popped up to have a look at a new birding site for me. Jack Snipe have been one of my bogey birds for years so I had a word with a local guy who told me about a reliable site. Barnes Meadow is an area just south of Northampton and is a Wildlife Trust Reserve that I had never visited before even though I pass it every day. So with wellies on I made my way into the reserve and started to wander along the margins or the wetland hoping to flush a bird. Normally flushing anything is strictly against my birding ethics but unfortunately one of the only ways of seeing Jack Snipe is to do just that. They are renowned for not flying until you are nearly on top of them and when they do they only fly a short distance before dropping down again. I walked around the outside before moving into the middle trying to judge the depth of the vegetated and very muddy water so as not to get a bootfull while all the time trying to keep an eye open for anything flying up. Then as I started walking into a very heavily vegetated part a Snipe sp. flew up about 4 feet from me, flew a short distance before landing 25 feet away. Despite watching where it landed I just couldn't get the binoculars on it and as I only saw the birds back when it flew I tried to get a better view. I've heard that Jack Snipe tend to run a short distance when they land so where they dropped won't necessarily be where they are when you go back. As I walked into the place where it landed I managed to flush it again but this time it flew around me so I managed to see the short bill as oppose to the long bill of the Common Snipe. At this point I decided to leave, I'd seen what I wanted so there seemed little point in disturbing them any further. Jack Snipe at last so it was a worthwhile afternoons work, despite getting covered in mud.
Posted by David James at 22:06