A local patch of mine has been playing host to an amazing amount of Short Eared Owls recently. Blueberry farm near Maidwell in Northants is a raptor hotspot due in main to the Hawk and Owl trust and the local landowners working together to provide suitable habitats. It has been famous most years for wintering Short Eared Owls as the fields have been left as set aside and are cut to the right lengths at the right times of year. A talk with the landowner is very informative and it makes you realise just how much work can go into a conservation project even though sometimes it may look simple. Anyway as I have said this year has been absolutely exceptional with the sheer numbers of Short Eared Owls currently here. I popped here a couple of weeks ago with Pete Bateup and bumped into another Northants birder Keith Tinworth - just standing in the one place we had at least 10 Short Eared Owl, 4 Kestrel, 2 Buzzards and a Peregrine. Keith and I agreed to meet up again this week with a hope of perhaps seeing the Long Eared Owl that has been reported here too. Unfortunately we never did see it though a very dark bird had us racing into the next field at one stage only for it to become clear it was only a trick of the light. Short Eared Owls though are literally everywhere on the complex and it really is an incredible sight to see so many. Keith did a count while I was trying to digivid one and he managed to get a total of 12, which is currently believed to be a county record at one location. When we arrived on site we another nice surprise as we watched a Short Eared Owl and a crow have an altercation, it was only when we noticed to Crow in question was bigger than the Owl we realised it was in fact a Raven. Anyway here's a couple of very shaky clips of Owls flying and one of a preening bird in the bushes - they won't win any awards but they area a nightmare to keep up with!


Also nearly forgetting to mention, earlier today I received a text from Bob Bullock saying 8 Bewicks had been found at Summer Leys Nature Reserve so I shot over here before making my way to Blueberry Farm. It was the first time I'd seen them in Northants so was a good addition to todays sightings. 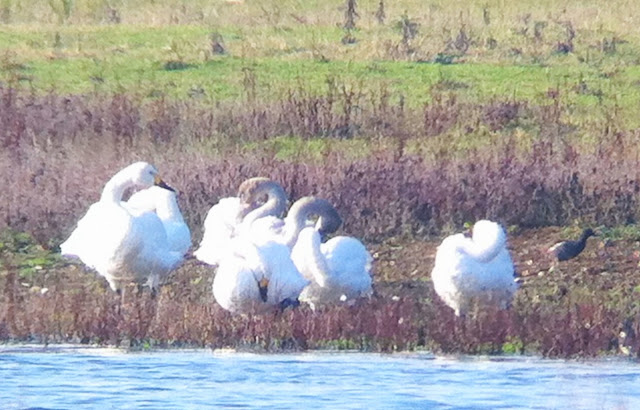