A certain bird has been eluding me lately, that being the dark bellied Brent Goose that has been seen at Clifford Hill Gravel Pits near Northampton. I have never seen a Brent in Northants before and as Clifford is one of my local patches it was going to be a good patch bird in the bargain too - but despite my best efforts I haven't been able to find it despite 5 attempts so far. As the nights are getting dark so early now at this time of year I'm limited to weekend visits only as a pop in on the way home from work wouldn't now be feasible until next year. So despite not seeing it on my previous attempts I wasn't going to give up, and after spending the morning getting stuck in the mud at Barnes Meadow again looking for Jack Snipe (I didn't see any this time) I made my way over the road to Clifford Hill. All the Geese were in their normal loafing area at the south eastern side of the lake so I made my way over and luckily enough just to the right of a small group of Canada Geese was a small black Goose busily feeding away. Finally here it was at last, hooray! I got a quick digi clip just for the records.


As you can see the bird is a juvenile, with the lack of a white neck band but nevertheless it was nice to finally get it. In my defence there has been so much happening recently with Short Eared Owls and Great Northern Divers (see previous posts) so most of my birding time has been spent elsewhere, and the geese here are very mobile and commute between here and somewhere else. It seems that luck plays a large part in finding the geese here. After watching the Brent for a while I wandered further along the bank to see if anything else was about in the goose flock and soon I had noticed another different looking goose fast asleep with the Greylags. It didn't take long to realise it was a Pink Footed Goose, then it got up after a dog walker got too close and wandered about for a bit allowing me a couple of pics before it went back to sleep again. 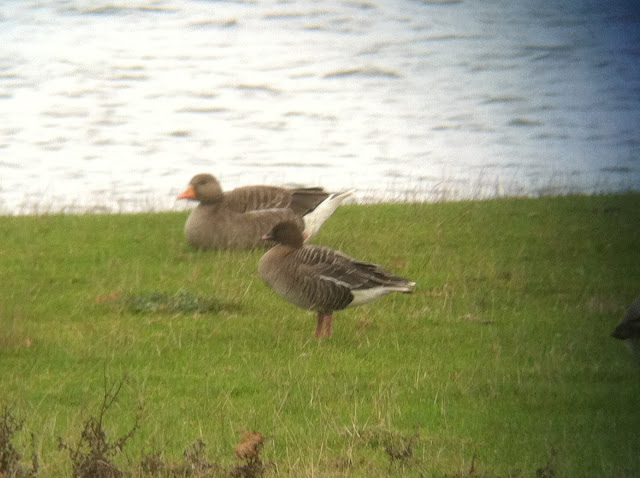 I did return here the following day (Sunday 27th) but unfortunately couldn't find the Pink Foot. The Brent was still around but mobile and was also joined today by the Egyptian Goose that I'd seen a few weeks ago. It would be nice to find out exactly where these geese commute to and from as rarer geese in the future will probably be easier to find instead of just relying on pot luck. Never mind that will be for another day.
Posted by David James at 16:28