The weather this morning was in keeping with the rest of the spring, as in overcast and windy. I did have plans to head up to Glapthorn Cow Pastures to see if the Black Hairstreaks had emerged but the cold wind outside made me think there was little point in wasting the fuel. Instead I headed just up the road to Salcey Forest to see what I could find. By midday the temperature had raised slightly so i parked up in the horse box car park and started to explore the south side of the forest. Almost straight away Wood Whites surprisingly could be seen battling against the wind, I find it hard to believe how strong they are at flying considering they look so flimsy and delicate. In the first clearing a Common Blue and Speckled Wood could also be seen, as was a Hornet which wasn't hanging around for pics but nice to see all the same. 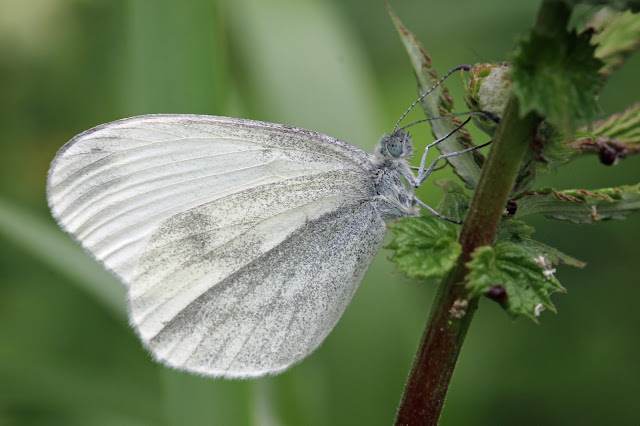 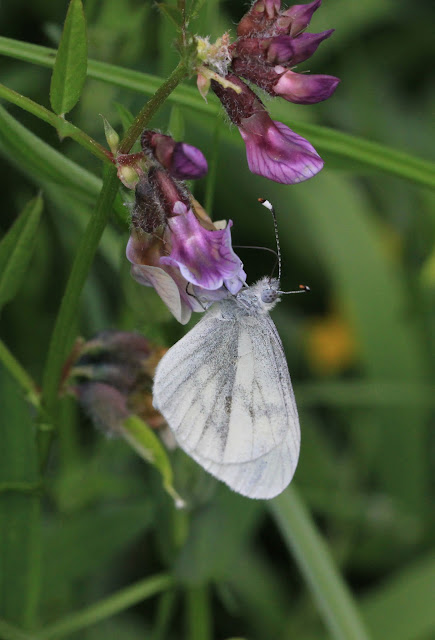 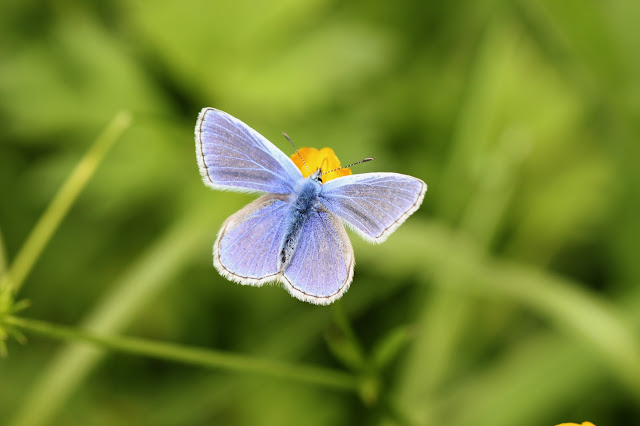 I continued my walk down and into the less frequented rides on the outskirts of the forest. More Wood Whites were dotted around aswell as the odd Speckled Wood. A nice Drinker Moth caterpiller was busy feeding at the end of a stem. 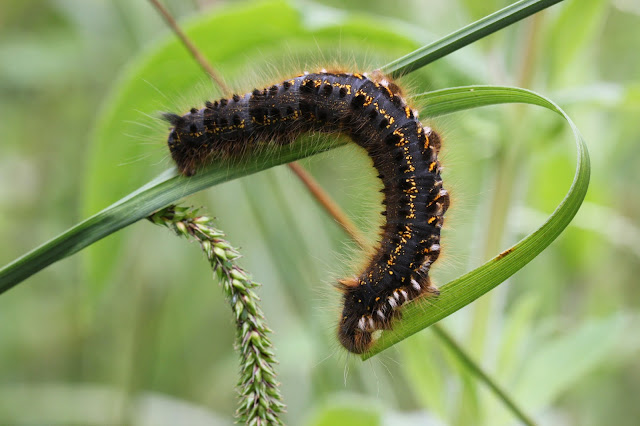 The insect of the day though had to go to the beetle I encountered just around the corner. As I strolled along the path I saw a large beetle flying along the grassland to my right. It landed on a leaf and I could see it was a large Cardinal Beetle sp, closer inspection showed it to be a Black Headed. This was certainly a first for me and although I am unsure of the exact status of these a brief internet search show that they appear to be rare so it was a good find. 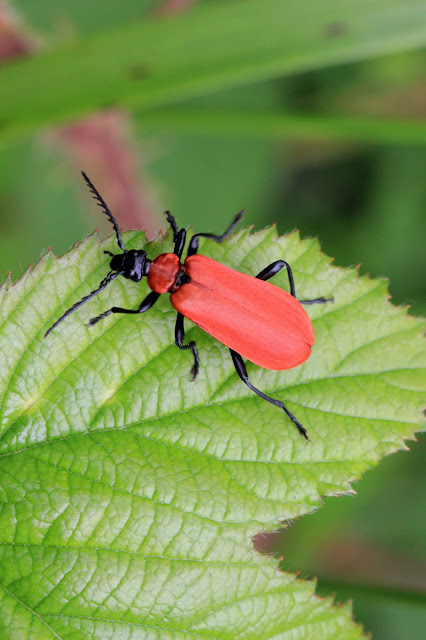 As I strolled along this section I came across a couple of Crab Spiders (see bottom of post for more details), and couple of Wolf Spiders with egg sack and a stretched out Nursery Web Spider enjoying the sun shining in between the constant clouds. 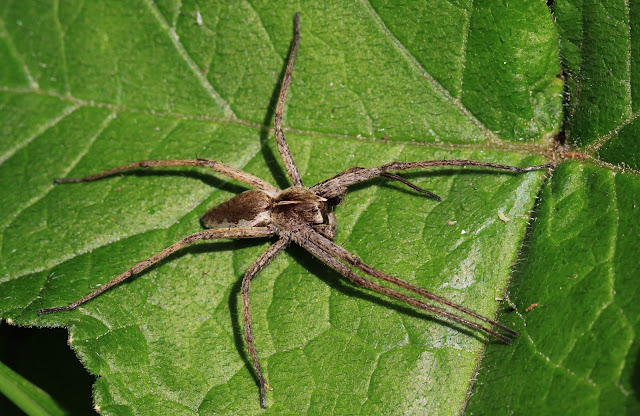 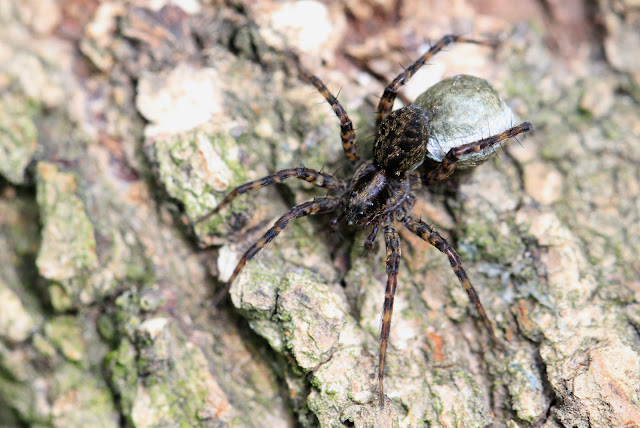 It is interesting what you can find along these quiet stretches of the forest and in amongst the Bees, Flies and Spiders the other notable insects that were out in force were the Longhorn Beetles. They seemed to be on every flower and a few different Longhorn Species could be seen, including a pari of Rhagium Mordax mating. 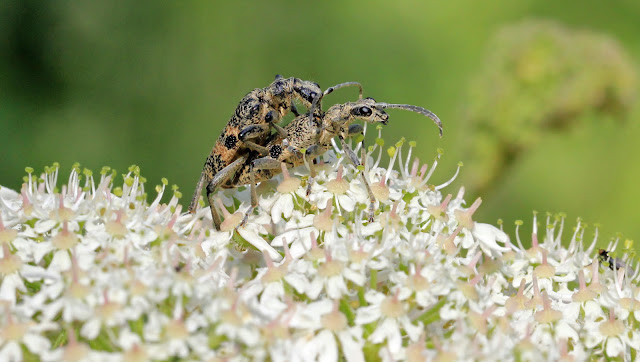 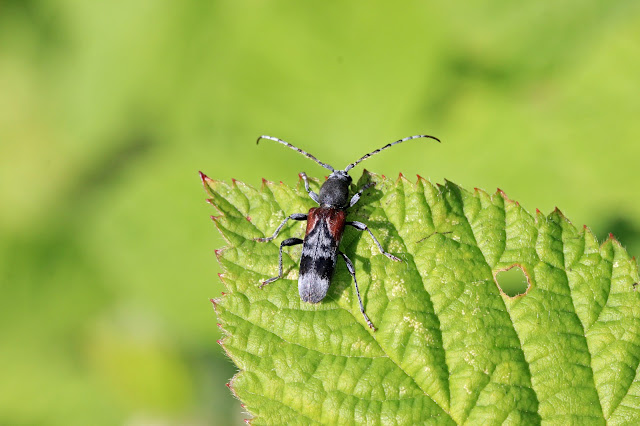 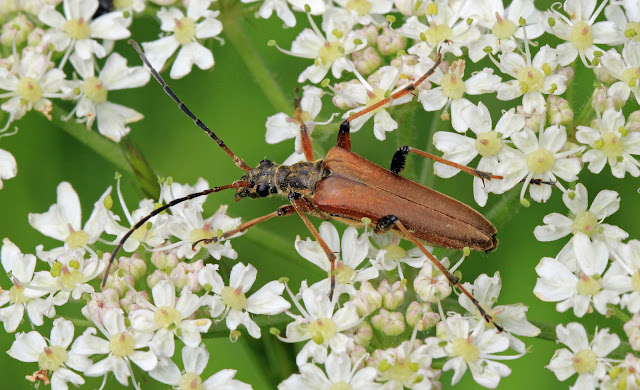 In total I saw 12 Wood Whites, 2 Common Blues, 4 Speckled Woods and 2 Small Coppers further down in the meadow area. As an added bonus I also stumbled upon an area with at least 2 (possibly 4) Common Lizards, I had never seen these before in the Forest so they were a nice surprise. 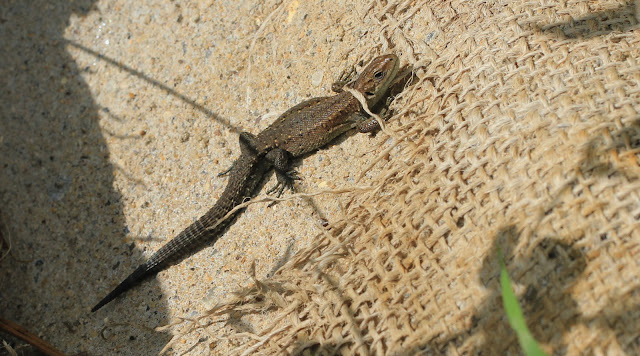 I also saw a Grass Snake in one of the clearings but unfortunately I wasn't fast enough with the camera to get a pic, it always amazes me just how fast these reptiles can move when they're spooked! That was pretty much the end of the walk but I shall include below a short section about one of my favourite arachnids, the Crab Spiders, which were fairly frequent along my stroll through the forest.

As previously mentioned I do have a soft spot for these stunning spiders and so it is always a pleasure when I spot one on a flower head. They can be remarkably hard to see, in fact you'll surprised how often the first time you notice one is when you look at a photo of  a flower you have taken on the computer to see a small spider looking back at you. They can change colour to match the flower they are on and then they wait for an unsuspecting insect to pass buy and nectar on the flower. When they do they position themselves with outstretched legs (hence the "Crab" part of the name) and then they grab their prey and inject their venom. To me they are one of the epitome's of lethal beauty. I managed to take a series of photographs today showing them hunting which I will share on this blog. I could watch these for hours and my first one was at Glapthorn Cow Pastures a few years ago. After reading up on these spiders I couldn't help but be enthralled and ever since then at this time of year I can't help but look for them when I am in the suitable habitats. Sometimes the Crab Spiders have a red ridge along the sides and sometimes they don't. I am fairly sure this isn't a sexing diagnostic as all I am aware of is the male is smaller than the male like a lot of spiders but i managed to get pics of both of the most common variants seen around here (ie with a red mark and without). The Crab Spiders method of feeding is simple, they are ambush predators and wait patiently on the top of flowers waiting for their prey to come to them. 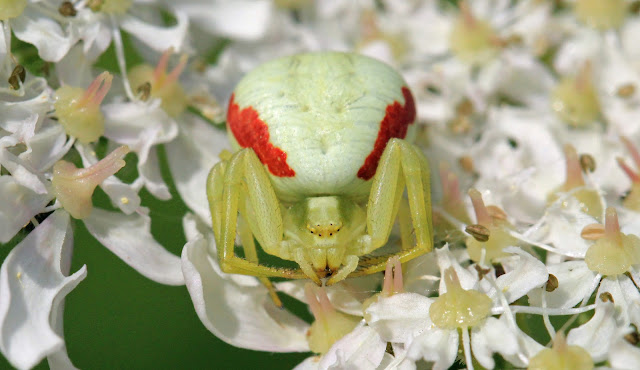 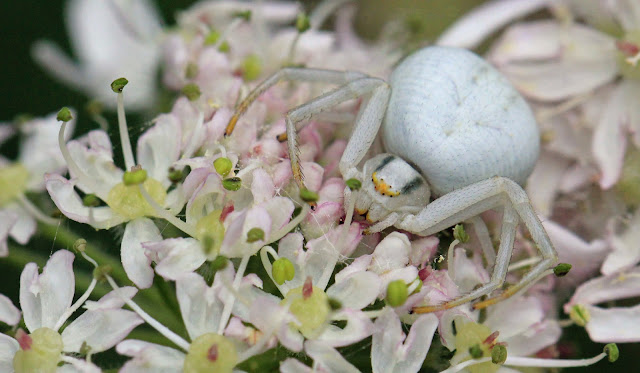 When an insect approaches they open their legs slightly and wait for the prey to come closer. 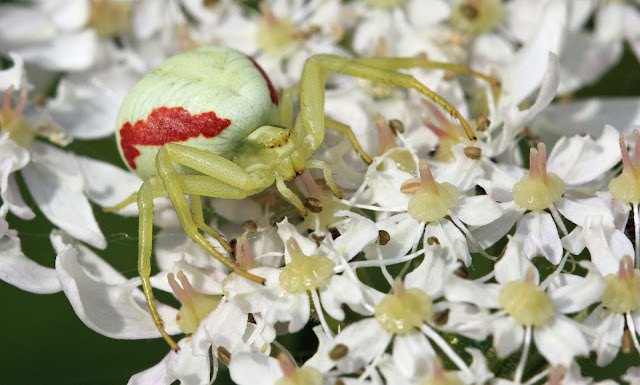 And when it starts to some really close it opens it's legs as wide as it can ready to grab the prey. 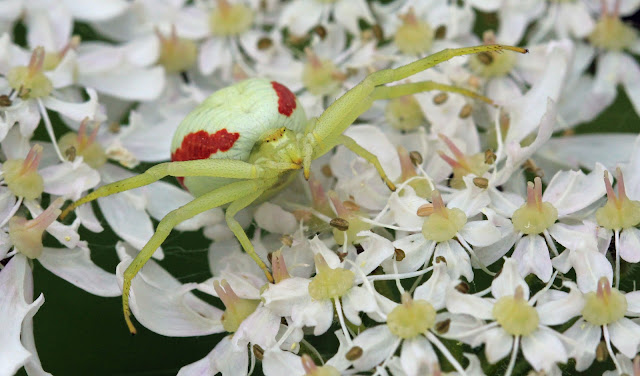 As the unsuspecting prey comes close enough to grab the spider strikes and grabs the prey with it's legs and quickly sinks it's fangs in. It all happens so fast the prey has no idea what is going on and before it knows it it's dead. 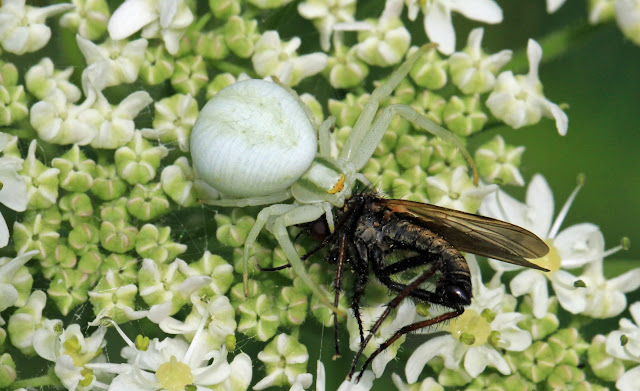 Here is a quick series of pics of the red variant hunting successfully. 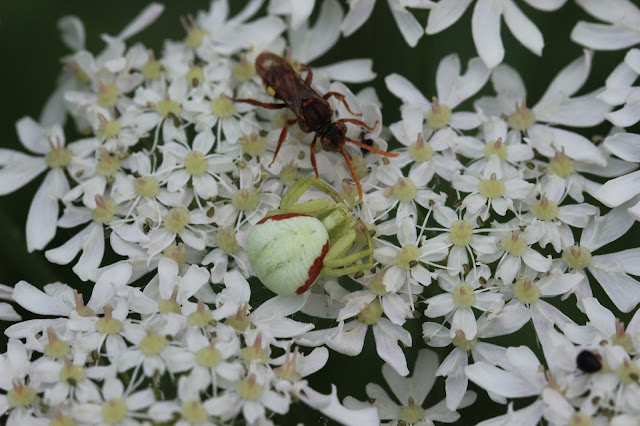 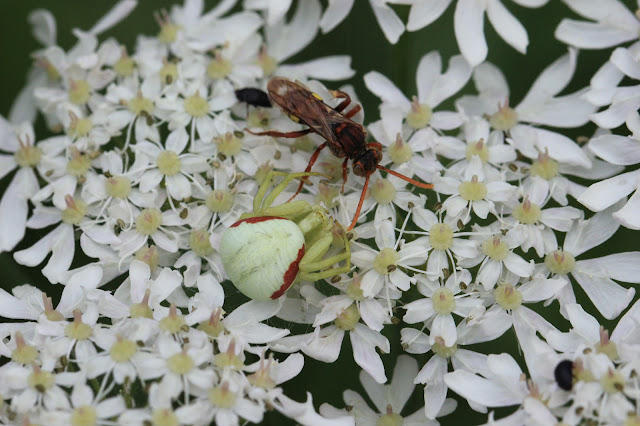 Insect comes closer having no idea of what is infront of it. 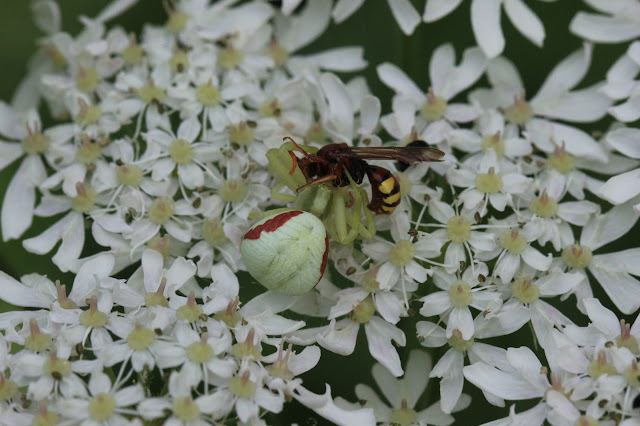 And then bang! It's now lunch.

I could watch these all afternoon, if ever a predator was the king of it's surroundings this is it. I wonder how many we walk passed without any idea of the stunningly well camouflaged killer siting patiently on the flower next to us?