With birding continuing to be a little slow here in Northants I didn't take much convincing to take up my friends Jon and Kirsty's offer to head to Norfolk for the day. There had been an adult Rose Coloured Starling at Wells-next-the-sea for the previous few days so we decided to make this the target bird of the day with anything else being a bonus. We had a quick look around Chosely Barns on the way to Wells and was surprised to see a Turtle Dove wandering around in the middle of the road when we arrived. We originally went to see Corn Bunting but they were proving quite elusive at this time in the morning. They could be heard singing in one of the nearby fields and a tantalising glimpse of a chunky looking bird on the wires further down the road meant that we knew they were around. Eventually while we were admiring the Turtle Dove again a large passerine could be seen flying over to the tree behind us before flying onto the concrete pad - Corn Bunting day ticked at last! We then drove over to the target bird at Wells-next-the-sea. We parked up in town and then walked along the quay side to the road where the Rose Coloured Starling had been seen. The bird had set up home in a small tree above bird feeders in someones front garden. We arrived to hear it had been seen 15 minutes previous and we now positioned ourselves for the waiting game, and waited we did, in fact we waited for over an hour before someone next to us excitedly exclaimed that "it's out" and raising binoculars we saw a beautiful adult Rose Coloured Starling standing in the fork of the tree. It quicky fed and then hopped onto the nearby bush before disappearing out of view on the ground behind. We only had a short view but at least we knew it was here! It then flew back into the tree and we started patiently to wait again. Jon had already got some pics of the bird during it's brief sortie from the comfort of it's tree and very generously lent me his camera. An hour later it came out again and fed on the fat balls and this time seemed to be out for longer thane before. What a stunning looking bird! I did see one early in the year (at Exminster, see previous post from 2nd march) which was a juvenile but this adult was something else and had simply incredible plumage. Here's a pic I managed to get before it returned back up into the canopy. 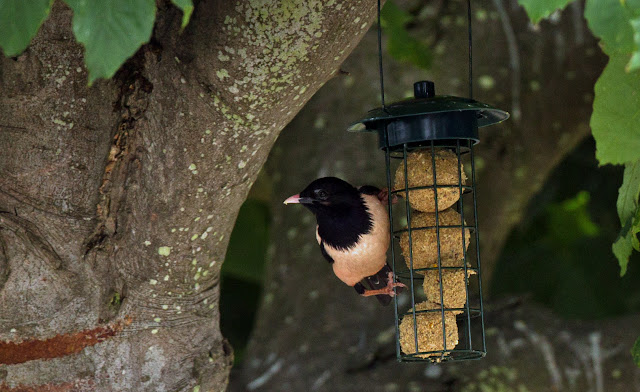 After this we went to have a look around Titchwell RSPB Reserve. By now the wind had really picked up and most of the birds were taking shelter on the islands. There wasn't too much to report though but lots of Little Gulls were there aswell as Black and Bar Tailed Godwits and perhaps the biggest surprise was a Wall Brown butterfly being tossed around in the strong wind by the dunes. I have to say the star of the reserve was this great looking Spotted Redshank was the star of the reserve as it fed along the shore of the small island infront of the hide. 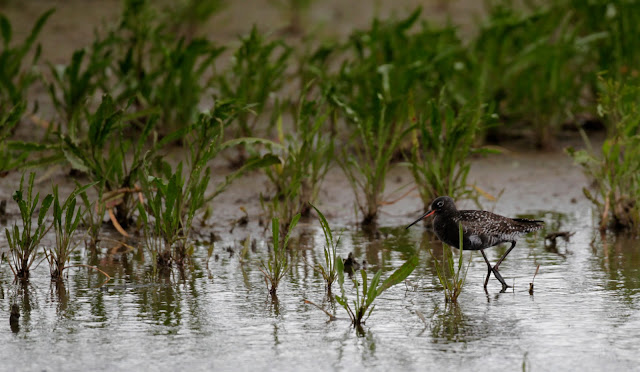 After a spot of lunch we then went to Holkham to hopefully get Jon and Kirsty some views of the Spoonbills. We had a walk down the the Jordan Hide and we didn't have to wait long before a Spoonbill flew into view and settled on the nearby lake. A pair of Marsh Harrier were flying around infront of us and we frustratingly just missed a food pass that happened out of our view. The Spoonbills (there were four by now) then took off and circled around before departing in opposite directions. Luckily though two came back and gave a good photo opportunity before gliding back onto the lake. 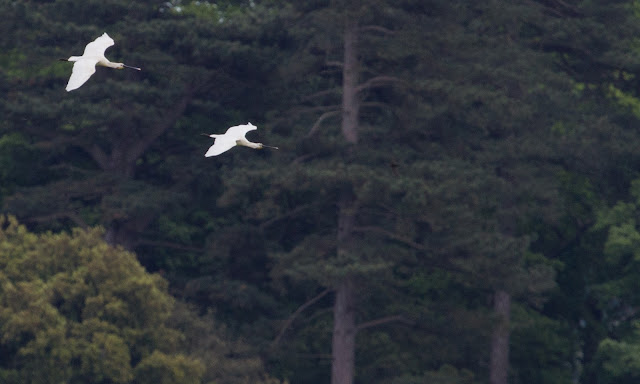 We then went to Holt Levels to look for Keeled Skimmer but as the wind was now very strong it proved to be more difficult than previously imagined but we did find four females (see pic below) in the more sheltered and boggy section along with a few Common Spotted Orchid. 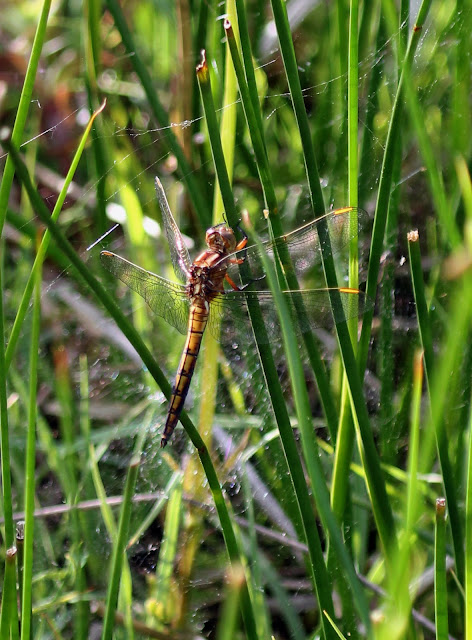 We then headed off to Kierans house to meet a couple more Norfolk (Robert and Connor) birders to have a good laugh before going back out for Nightjar. We went to a place I had never been before to see these great birds and I am very pleased we did. Jon picked up a bird churring from the far corner of the clearing we found ourselves in and the Kieran saw one in flight heading up from behind us. As it wasn't even dark yet you could pick up all the plumage detail in the binoculars and it wasn't long before it was joined by another one. One of the birds even perched in the branches of a dead tree in the centre of the clearing a couple of times before heading back down and continuing the chase after another Nightjar had joined in too. So we now found ourselves with three Nightjars flying around us as it got dark. One had perched really close to the group but as me and Robert had legged it back to the car to get the scopes we missed. Luckily though one came back very close (even flying along the path we were standing on!) and it couldn't have been more than 12 feet away when it finally turned and headed back towards the clearing. It was a great end to a great day and we drove home still buzzing from the days experiences.
Posted by David James at 21:17