Since the last post spring has been a little dire to say the least. Locally the birds have been few and far between, and those we have been lucky enough to have land at a local reserve have only stayed for a short while before carrying on their migration. My run of luck has certainly run out as due to work I have missed all the waders (what there has been of them anyway) and the only dribble of Black Terns arrived on an evening I was particularly late at work so couldn't get to those either. To try and offset a temporary "rubbish spring depression" I have been venturing out over the county boundaries to see some of the other delights neighbouring counties have had to offer. At the beginning of May my mate John Friendship Taylor and me popped along to the Ouse Washes to hopefully catch up with a Red Footed Falcon that has been showing on and off during the previous week. It was a beautiful spring day and we had a very enjoyable stroll along the bottom of the bank of the RSPB section along to the railway line bridge. The Ouse Washes really aren't that far away and are so good it does make me wonder my I don't go there more often but I guess my passion for local birding is the answer to that. Unfortunately we didn't see the Red Foot but a highlight came in the unexpected form of a Common Crane flying over the top of the bank right over the top of our heads! In fact it even looked at us before turning round and gaining height. I took a pic as it drifted away. 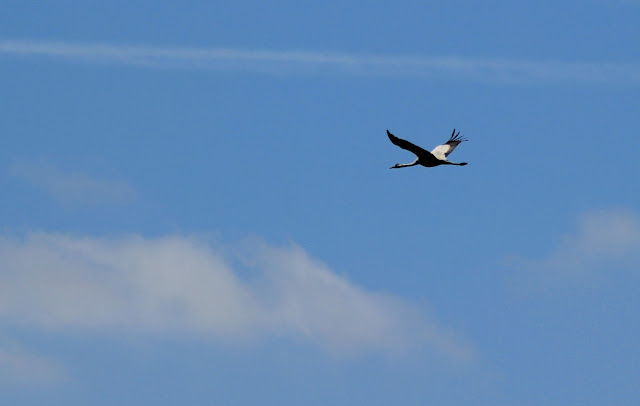 On the way out of the reserve I noticed a Corn Bunting singing right next to the road and I managed to sneak up in the car a film it from the car window.

The following week another couple of friend joined me and John Friendship Taylor (JFT for short) in the shape of Jon Philpot and his partner Kirsty. We had a very enjoyable day wandering around RSPB Minsmere with great views of the local specialities including Stone Curlew, Little Tern, Marsh Harrier and Spoonbill. The Dartford Warblers up on Dunwich were keeping their head down unfortunately and only fleeting views could be achieved and a very vocal Savi's Warbler very frustratingly would not show itself despite me and JFT putting in what seemed like hours of time trying to see it. We left at nightfall after a great day ambling about. Jon (who's a bird photographer) even let me put my memory card into his set up so I could take a pic of one of the Avocets on the scrape. 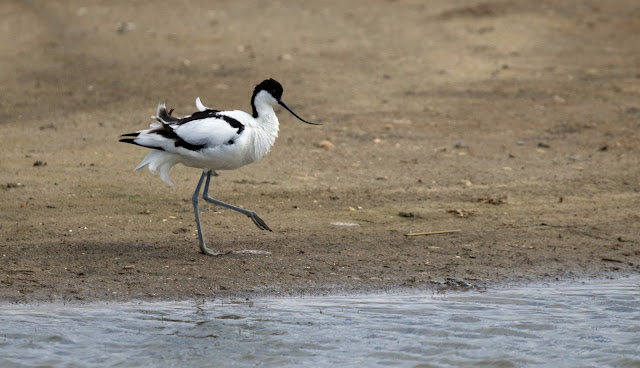 Also at least a Stonechat posed for a photo on the heath even if the Dartfords had other ideas. 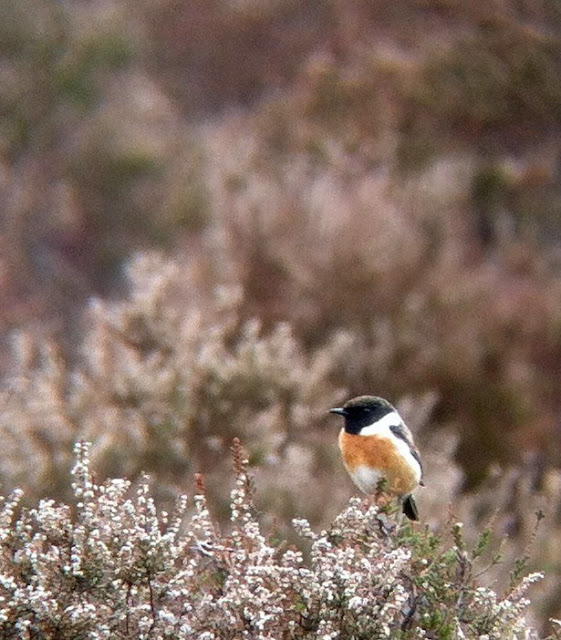 We spent the final part of the day listening to Bitterns booming and watching the Hobby's hunting from the Bittern Hide. A pint in a traditional Suffolk village pub capped the day off a treat.

A couple of weeks passed by after this with little to show for local birding. A Marsh Warbler was reported north of the county which I couldn't help but investigate. Unfortunately the bird couldn't be found and the best picture I took was of the Peacock guarding the local farm. Not a Marsh Warbler but a nice bird to see despite it being rather unexpected as I walked around the corner in the farmyard. 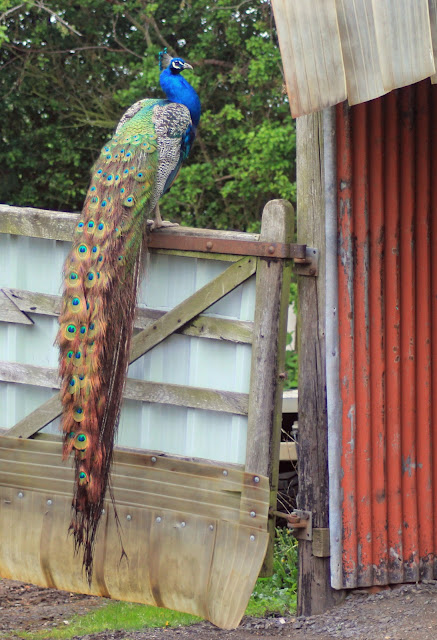 And then for one of the best days birding I have had for what seems like a very long time. As me and JFT had dipped the Red Footed Falcon earlier in the month we decided to head over the RSPB reserve at Lackenheath Fen as one had been seen there and the photo's being taken looked like it was showing well. Jon and Kirsty joined us once again and early in the morning we found ourselves standing by the central reedbed as the temperature started to warm up. The action started straight away with a Bittern flying in and giving a prolonged view as it drifted over the trees and into the centre of the reeds. As we waited we chatted to the local birders with one whetting our appetite with stories of the Red Foot flying over peoples heads near the pool on the east side and along the path nest to the viewpoint but we still had no sign. It had been seen in the morning perched in the trees one the other side of the reedbed so we decided to make our way over enjoying a view of another Bittern flying in from the opposite direction this time and also a distant view of two Common Cranes flying over the horizon. We stopped near the line of trees and scanned along at it wasn't long before I managed to pick up a falcon shape sitting on the edge. There were a few Hobby's sitting on the branches but this one looked different, zooming in with the scope showed it to be the Red Footed Falcon. It eventually flew out and started to hunt over the reeds and gave great views from where we were standing but as always we wanted a closer look and as it appeared to be whirling over the heads of the photographers on the other side we made our way round. We glimpsed a Barn Owl on the way taking prey back to it's nest site and it wasn't long before we joined the photographers with incredible views of the male Red Footed Falcon sat patiently in the trees infront of us. Every now and then it left on a quick sortie over the reeds before it went back to it's perch. As the day warmed up even more the bird became more and more active and gradually it came closer and closer. The next few hours were simply unbelievable with just insanely good views of this gorgeous little bird hunting so close. At one point it did one of it's quick inflight zig zags before hurtling over to catch an insect no more than 15 feet away from me. As it became more active it did as the local birder had promised and flew from the west side to the east (where the pool is) and it put on a real show - sometimes flying right along the line of birders/photographers. Jon once again offered me his camera to put in my memory card and I spent a while trying to get a shot. Jon has some of the best gear available to a wildlife photographer but despite this it was still a challenge to nail a pic as this thing moved like lightning - in fact the changes in direction this agile bird could perform was putting the local Hobbies (which had now taken to hunting the Swifts putting on their own very spectacular show) to shame. Eventually I started to get better and managed to get some decent shots as it flew over and hunted. 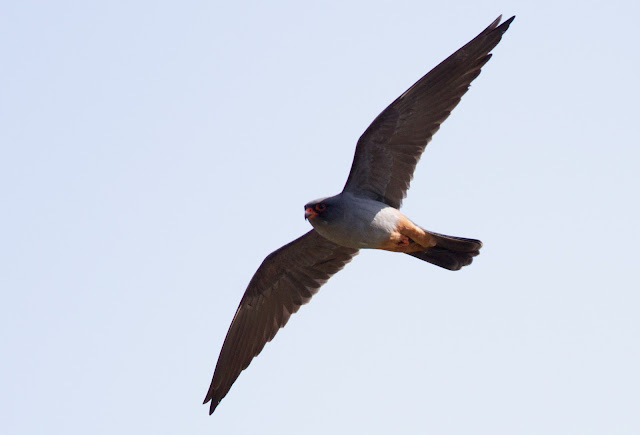 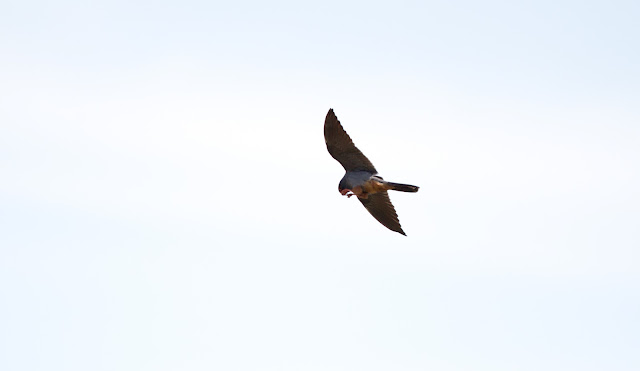 And then I got the one I was most happy with as it almost looked straight at me.......what a stunning bird!! 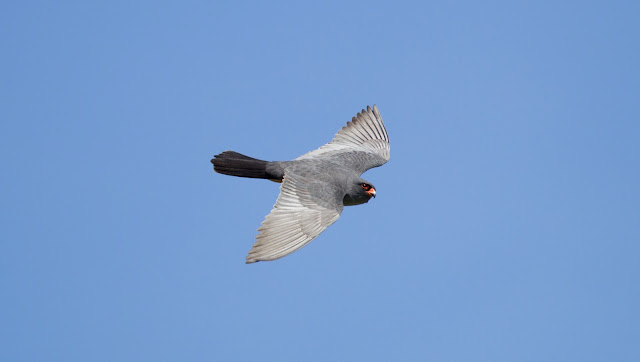 The fact that Jon allowed me to use his camera while the bird was showing so well is something that shows what a nice guy he is, and I owe him a lot of gratitude for being able to achieve to above pics.

Luckily the day for us got even better as we had been told of a good site for Montague's Harriers further north in Norfolk (I'm sworn to secrecy I'm afraid). We arrived on site to meet good friends of mine Kieran and Leila and we waited patiently for a sign of one of the birds. Eventually JFT picked up the male flying in from the right. We had already been told by previous birders that the female was in the field but as they were nesting she was keeping her head down so couldn't be seen. As the male flew closer a view in the scope showed he had what looked like a rabbit in his talons. A trickle of excitement ran through us as we realised we may be lucky enough to witness a Montague's food pass. Jon had lent me one of his spare lenses (infinately better than mine) and as the female rose up I took a series of shots. I watched the food pass through the camera and it wasn't until I got home and downloaded the pics onto the pc that I realised I had somehow managed to capture a few ropey pics. Here is the set. 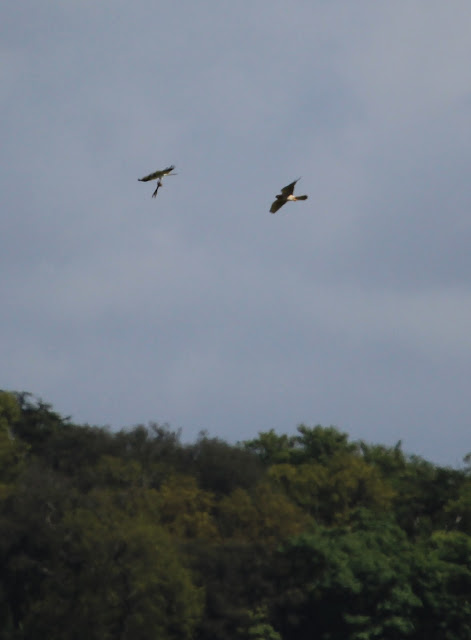 Male bird flies in with prey and female comes to meet him. 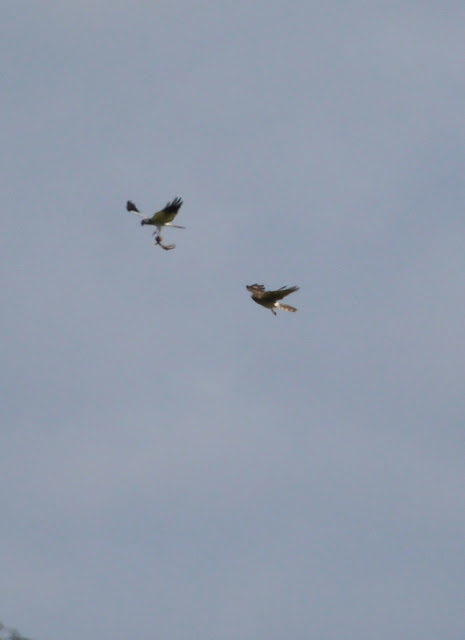 Female starts to position herself below him. 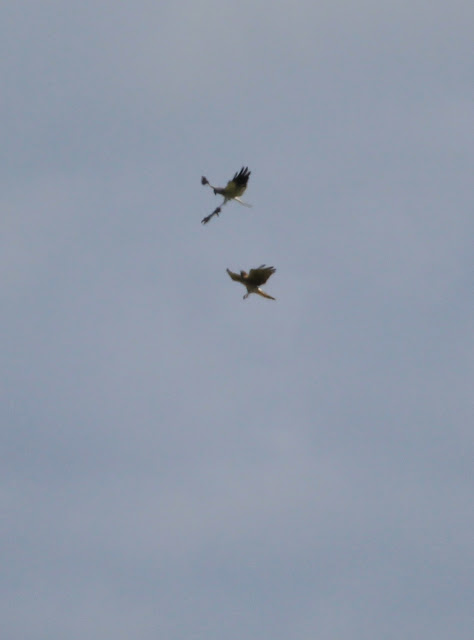 Male Harrier prepares to drop the prey for the female to catch. 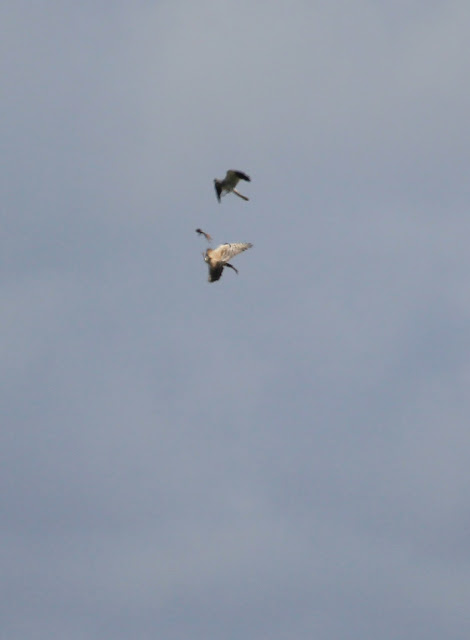 Male drops the rabbit and the female lunges to catch it. 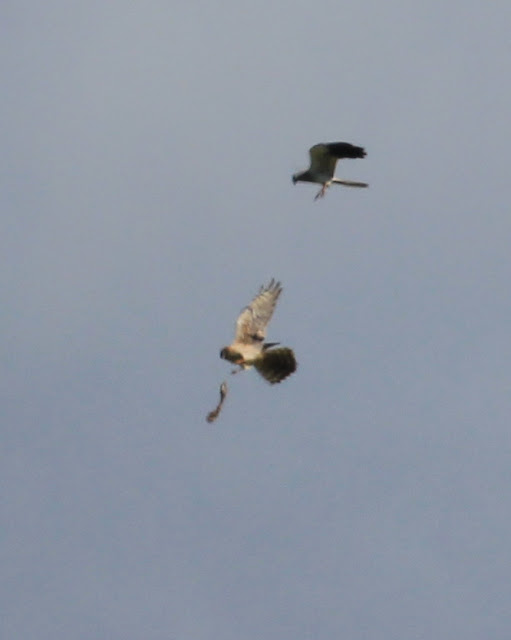 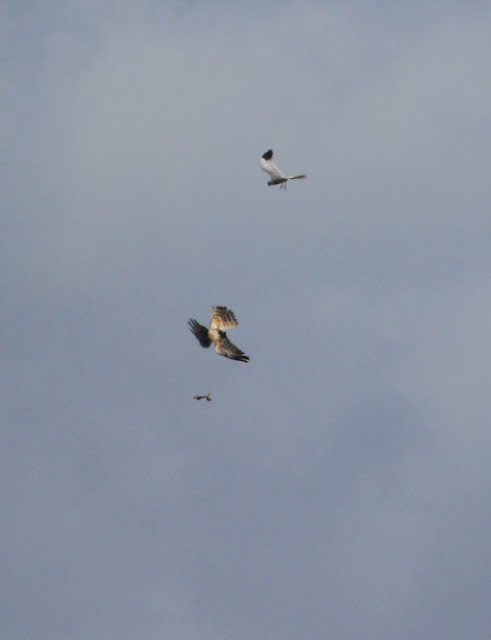 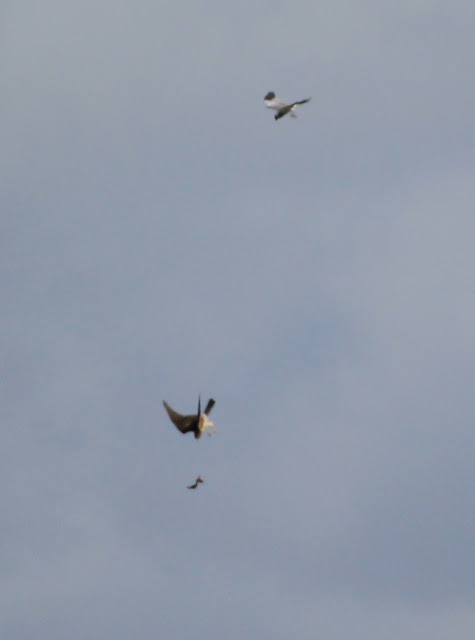 She follows it down as the male watches from above.... 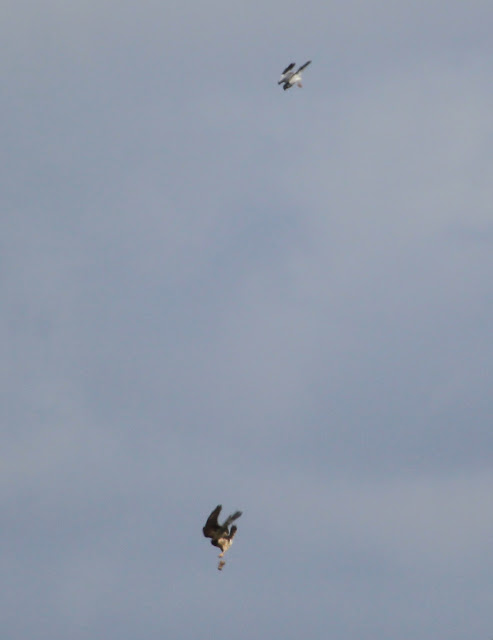 ......before she catches it a millisecond after this pic was taken. Foodpass and courtship for now complete!

After this we parted company as Jon and Kirsty had a room booked to spend the rest of the weekend at Minsmere so me and JFT headed off to Titchwell. Not much to report here unfortunately but the Grey Plovers looked simply stunning in their full breeding plumage. 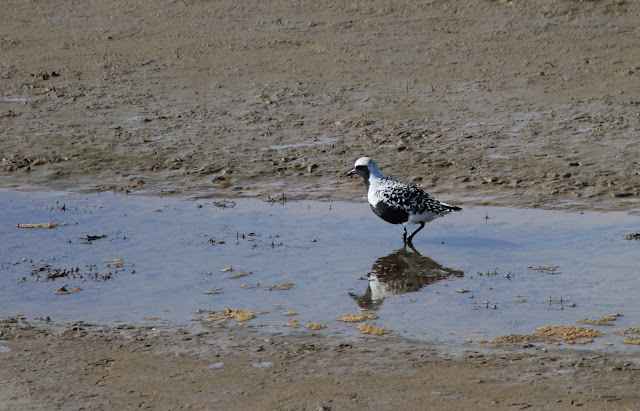 and the Swifts were putting on a real show from the walk down to the new hide.


We left here and spent the evening with Robert Smith (a Norfolk birder and all round top bloke) at Dersingham Bog but alas our luck had ended and despite staying until nearly 11pm no Nightjars were heard. A solitary Gropper reeling away and a curious Roe Deer were our only consolation. 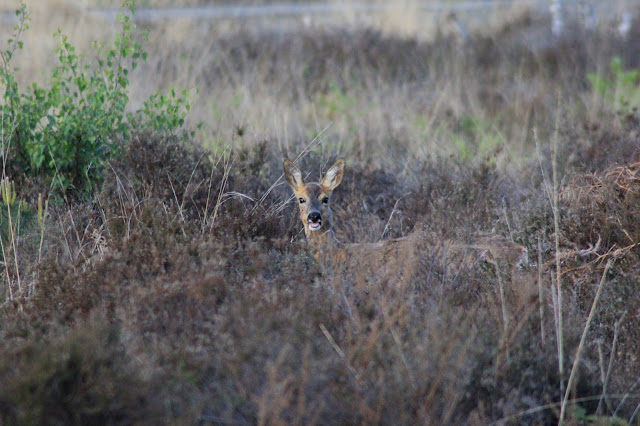 The following week I went back to the Washes in Cambridgeshire. This time with another mate of mine, Sam Candy. Nothing too exciting to report but again it was just nice to be out enjoying somewhere different. We had good views of a pair of Common Crane on the Nene Washes and then we moved onto the Ouse Washes where we had 5 Garganey (4 drakes) and bizarrely a Corncrake sub singing from the Common Wash Hide. We did have a nice surprise though on our walk along the bank as dragonflies could be seen emerging and this unusually confiding 4 Spotted Chaser even posed nicely on my hand. 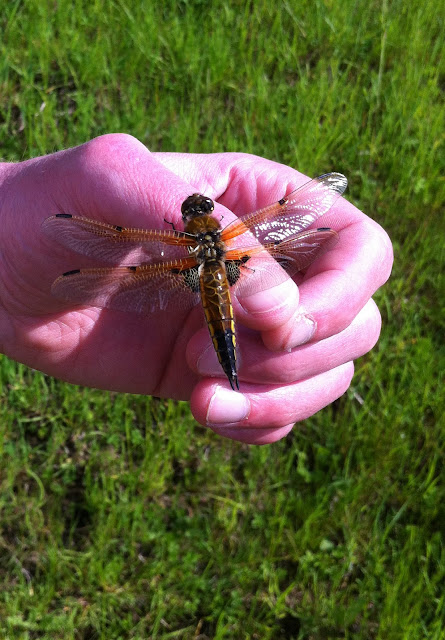 By now it was the beginning of June and it looked like spring had passed me by locally. Despite missing most of the birds I have spent a few evenings out and about taking pics of wildlife as and when I come across it and as the insects are now starting to liven up there is always something to admire. Here's a selection of the latest photo's. 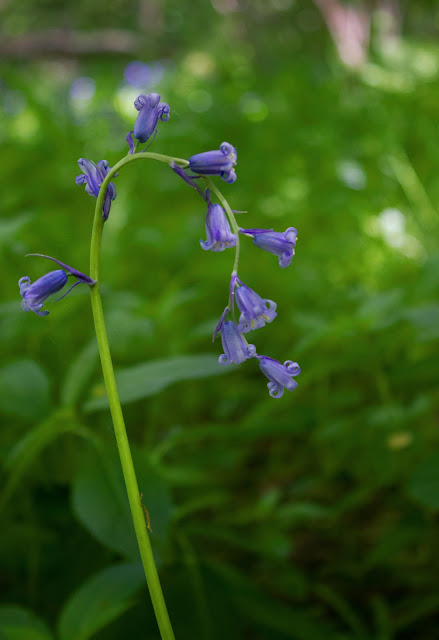 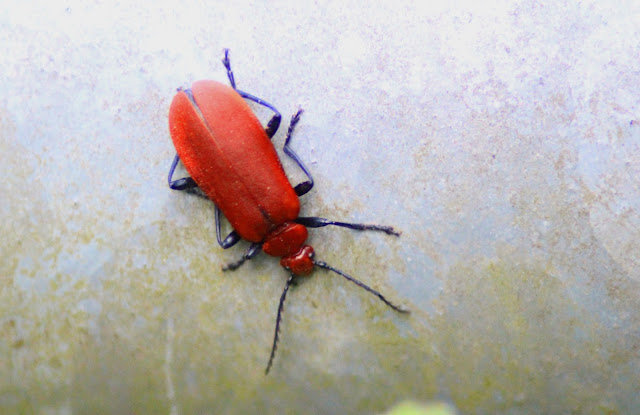 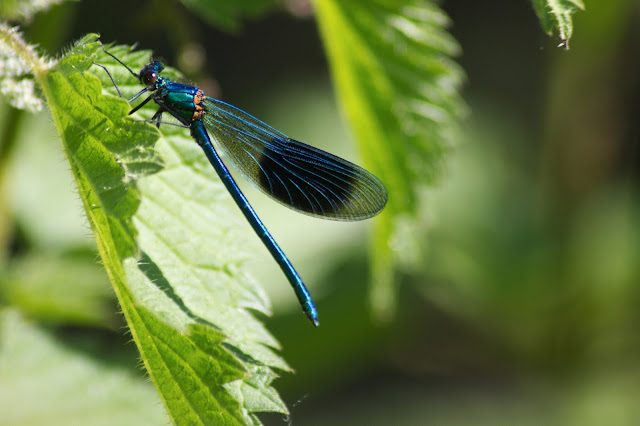 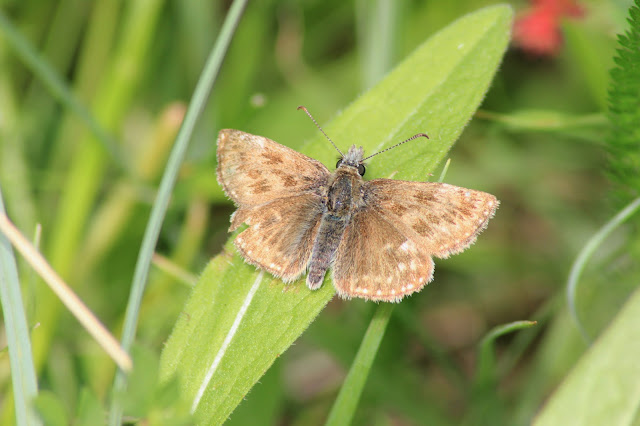 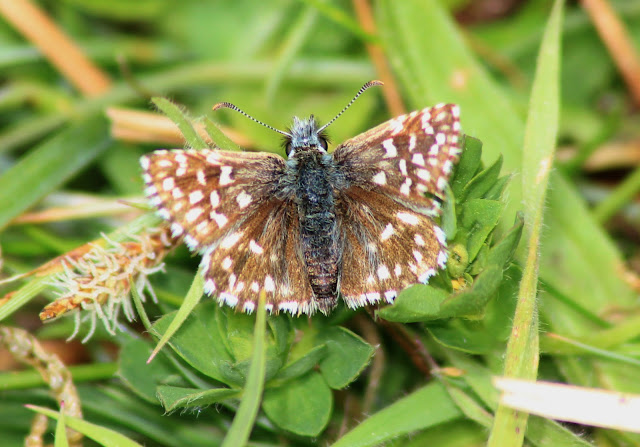 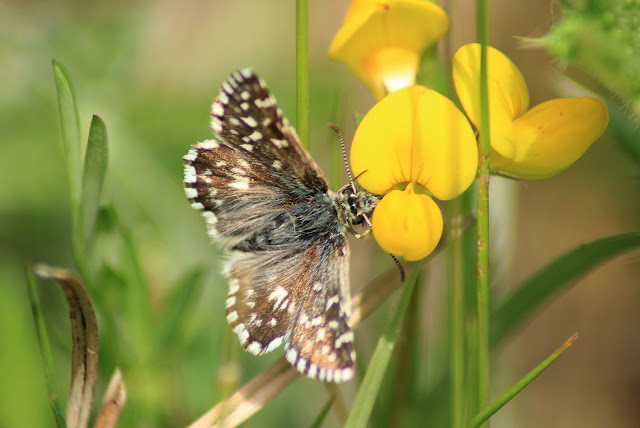 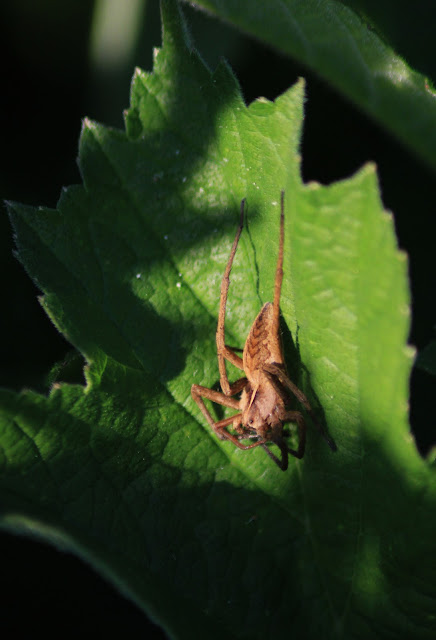 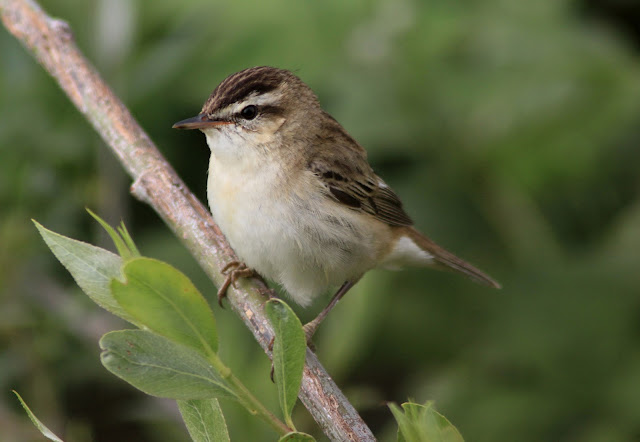 Hopefully the weather will be good to us this year as now the butterflies are starting to emerge. I did neglect the local butterfly sites last year but I feel the urge this time to get out and see them all again. In the next few weeks Purple Emperor, White Admiral and Black Hairstreak should all appear so lets pray for some sunshine and hopefully some good birds added into the mix too! It has been a great few weeks though, perhaps not locally, but by traveling further afield we have had some amazing birding experiences shared with very good company too!