This weekend my fiance and I had been enjoying a weekend away in Great Yarmouth and as it was looking like the ever present westerly winds were not going to be changing direction any time soon my hopes were not that high with regards to rare birds being blown onto the coast. Never the less though as with every autumn an eye was kept on the information services just in case anything did arise, and arise it did. On the afternoon of the saturday a juvenile Woodchat Shrike was found in the bushes next to a small car park just down the road from where I was staying. I have to say after looking at the pictures of the bird I was in two minds whether to go or not as I would rather have seen a full summer plumage adult bird and I will admit that if i was back home a hundred miles in land i probably wouldn't have made the journey - but this was a lifer, was only 10 miles away and to add to it the Eastenders theme tune was starting up signalling the start of the 2 hour long Sunday afternoon omnibus so my mind was quickly made up and off I went. I am very glad I made the decision as right nest to the car park on top of a bush sat the Shrike. Shrikes are normally fairly easy to spot as they do like to perch on top of things and they are also seem to be quite tame for some reason and this one was no exception. It just sat there in the bushes every now and then casting a glancing eye over the people there taking its photo before occasionally getting flushed and flying in a big circle before landing back in the same bush again. Its hard not to get quite attached to birds when they show like this and you get nice prolonged views but I did eventually tear myself away for a bit of sea watching - which produced 2 Arctic Skua, a possible Manx Shearwater and a tiny dot on the horizon which some chap confidently claimed was a Pomarine  but personally I have no idea how he came up with that as it was so far away, so it wont be ticked off the list just yet! Here's a few picks of the Shrike with a short clip too, a nice unexpected surprise! 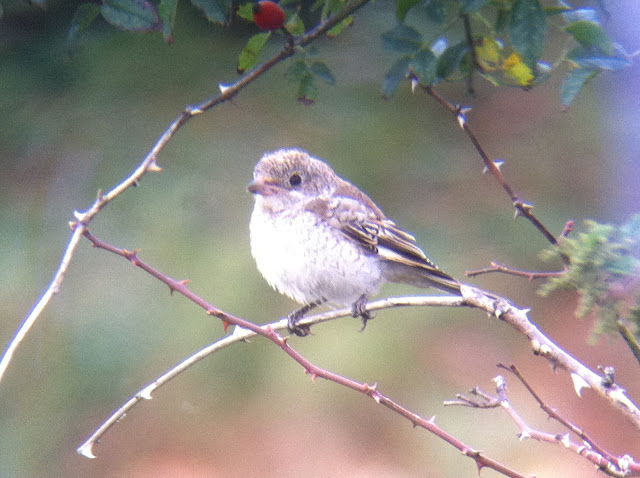 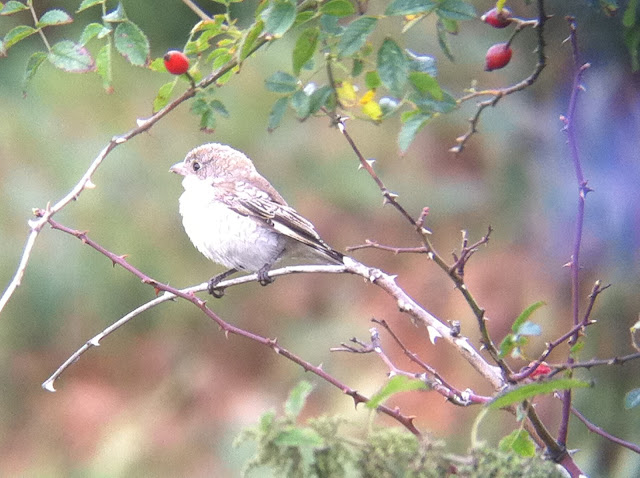