Once again it has been a while since the last update. This is mainly due to the end of summer lull which all birders dread when the birds are simply concentrating on bringing up young or moulting etc etc and not a lot moves about. So the slow (in fact very slow this year) onset of autumn brings a breath of relief to people like myself as hopefully things will be starting to hot up a bit.A report had trickled through of a Sabines Gull at Grafham Water just across the border in Cambridgeshire so on the evening of the 15th of September 2011 I shot over there after finishing work to go and see it. I knew I only had an hour of daylight left so various people telling me that it had flown wasn't helping my blood pressure at all, but luckily a few bays to the left I managed to get it in flight and then settled feeding on the water - distant views but views nontheless. The following Sunday Kieran Nixon called me to say he and a couple of birding mates were going to pop over from Norfolk to see the same bird so I nipped back over to see them. As I arrived before them I started the hunt for the bird and once again had it in flight across the main body of water. As before it was very mobile and didn't stay still for very long at all before it flew off into a bay along the north shore. I crept along the footpath before getting the most amazing view of the bird standing on the bank, unfortunately it was then flushed by a dog walker back into the water just as Kieran arrived. but we still had incredible views. 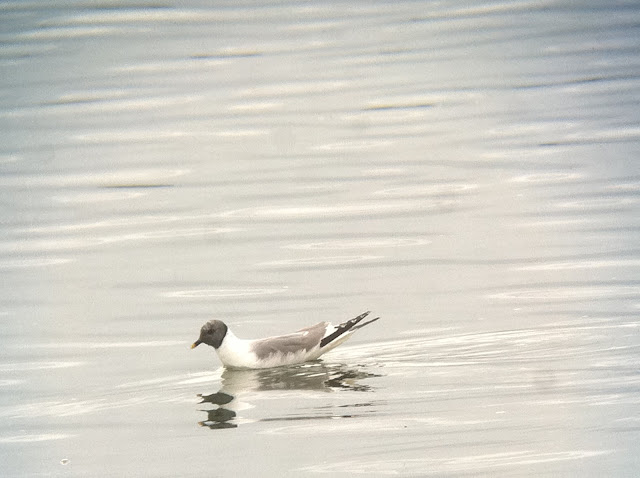 We decided to follow the dam wall after this to see if we could find the Grey Phalarope that had been reported. I did manage very distant views of this the other evening when I came but as people were saying how well it was showing I couldn't resist a quick look - and I am so glad I did, it was wandering along the dam wall seemingly without a care in the world and is without doubt the best view you could have of this cracking little bird.

The next twitched bird was a little bit more local. A Ferruginous Duck had been seen at Pitsford Reservoir so on the 1st of October I made the slow yomp round to Walgrave Bay (it had to be the furthest one away didn't it?) so hopefully connect. The sun was blazing so I was hoping that picking it out wouldn't be too difficult, and for once I was right. It was a cracking drake and stuck out like a sore thumb! The vids not too clear but its the bird centre of shot behind the Pochard on the middle.


Lastly for this post is the big one. Due to the very heavy winds across the Atlantic caused by Hurricane Katrina a Sandhill Crane had been blown across the ocean and somehow ended up in Scotland. Matt my mate from up north had been lucky enough to have seen it a couple of weeks ago, but then it flew off and reports started to trickle in of the bird slowly working its way south people down here were starting to get very excited. It only migrates during the day which is a pain as when it does get reported it invariably flies off shortly afterwards so people miss it. So on the morning of the 2nd October when I get a phone call to say its in Suffolk I am mixed with excitement and apprehension, if we go will it still be there? Its a long way after all! It was agreed though that we certainly wouldn't see it by just staying in Northants so the decision was made to go for it. I quickly made my way to Irchester to pick up Big Jake, Ruth and another Northants birder Frank and we were quickly on our way. For once the A14 was clear and we made very good progress into Suffolk and even more luckily although the bird was mobile it had settled in a stubble field. Kieran had made the journey from Norfolk with fellow Norfolk birder David Norgate and they were already on the bird which is always handy when someone is there to tell you if it flies or not. we found the village (Boyton) parked up on a vergte then ran up the hill to get to the field. lots of birders already there with binoculars up was another encouraging sign and then finally I got my first ever view of a magnificent Sandhill Crane feeding in a stubble field - and what a sight it was. A fantastic sight not just because of what it was and where it had come from but also because of the manic journey we had taken to see it!! Due to the heat haze this pic and vid aren't too good, and also as I had just sprinted about half a mile to get here with a lot of it up hill my hand was shaking rather a lot. 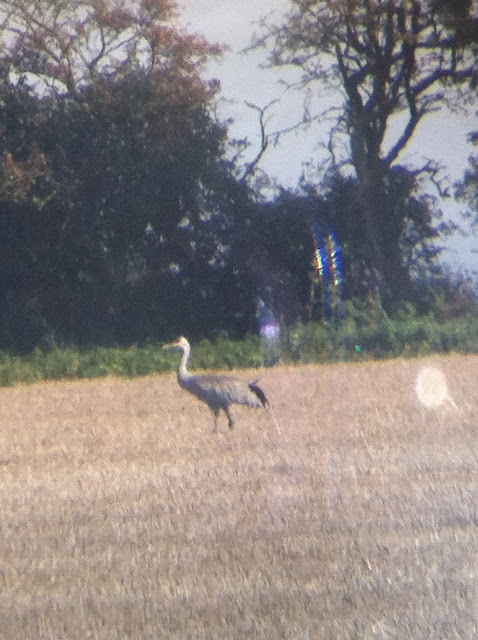 Unfortunately after only 10 minutes of viewing 3 microlights came over and spooked it into the next field, so we shook hands with the people that we knew at the twitch and made our way back to the car - and drove significantly slower back to Northants!! An incredible day and possibly one of the most exciting twitches I've ever been on! At some stage my blood pressure may return to normal.
Posted by David James at 19:57