An old  friend of mine, Matt Whitelocke,  had informed earlier in the year that he would like to see some of the rarer butterflies in my area, and as he lives way up in the Scottish highlands there is quite a bit of stuff down here in Northants that he never gets to see. So we arranged to take time off work at the end of June this year to try and get him to see some of them and this is the update from the week in which he stayed

Tuesday 21st June 2011
We spent most of today concentrating on local stuff as Matt had a long drive the previous day down from Fort William so didn't really fancy the idea of spending hours on the road today. So the first stop was Glapthorn Cow Pastures near Oundle in Northants. This area is the Black Hairstreak capital of Britain. It has a lot of Blackthorn bushes with little cut outs with Bramble bushes for them to feed on, in fact the middle section of this reserve is pretty much designed around keeping the Black Hairstreaks happy. The only downside was though due to this years bizarre weather it has meant that a lot of butterfly species have emerged a lot earlier than normal this year and although I got some good shots of newly emerged Black Hairstreak last week (see previous posting) the weekends downpour had obvioulsy taken it's toll. The same bush that held several Hairstreak last week was completely barren with the exception of a Large Skipper. We took a walk around the reserve for a bit, lots of Meadow Brown and Ringlet were on the wing with a few more Large Skipper and a Comma trying it's best to remain inconspicuous by closing it's wings in the vegetation. 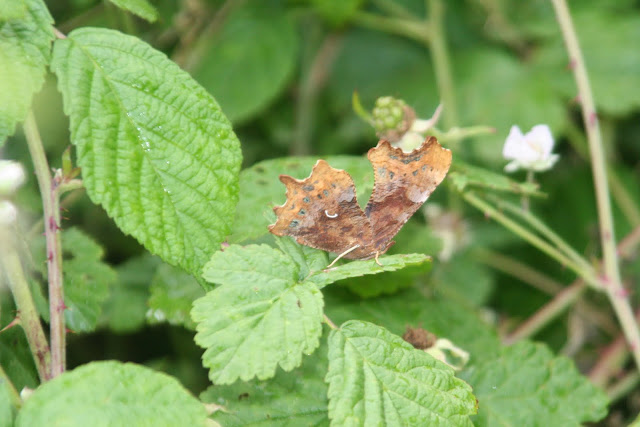 A hornet made an appearance while we returned to the Black Hairstreak area and then quite amazingly Matt spotted one. I think I would have walked straight past it so 10 points go to Matt, as a very tatty Black Hairstreak was sat on the end of a leaf. As I ahd already taken pics last week I let Matt take all the pics he wanted and eventually it flew. I did sigh a big breathe of relief as this was one of the main reasons for him embarking on the 8 hour drive down and I had a nasty feeling I was going to let him down!

From here we drove over to Twywell Hills and Dales to try and see the Marbled Whites. These are a chalk grassland speciality and are often here in good numbers. I managed to find some the previous week while I was doing a bit of groundwork in preparation for Matts visit along with a couple of Large Skipper mating. 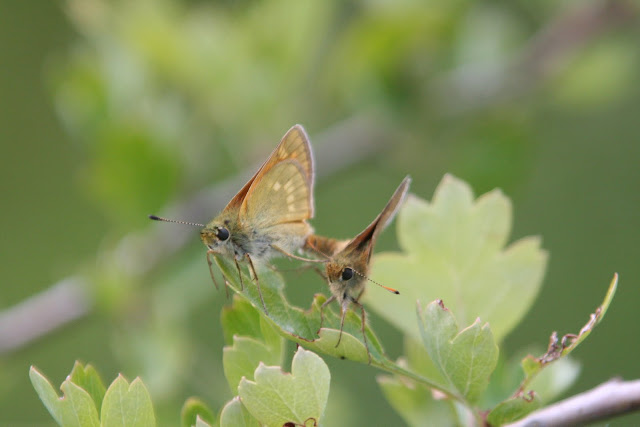 But anyway that was last week, and fortunately there was a lot more Marbled Whites out today despite the blustery conditions. It's easy to get a bit complacent when you see things often enough, and these little crackers tend to get overlooked by many people as they're so common in this area. They are simply stunning though and I have to say they rate as one of my favourite butterflies and I'm lucky enough to have them on my doorstep! 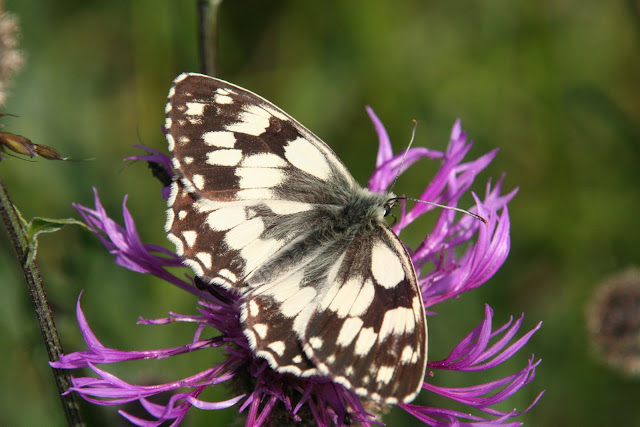 After a brief visit to a local pub for lunch we found ourselves in a Bean Field near to a village called Isham. A Quail had been calling for a few weeks here and although seeing it would be completely impossible, I still thought it would be a good for Matt to hear it. No sooner had we got down to the side of the field we could hear the distinctive "Wet my lips" song could be heard from the centre of the field. It's quite an incredible location with Skylarks singing and lots of Yellow Wagtails calling from the wire overhead, and the amount of Poppies blanketed the whole side of the field a sea of red. 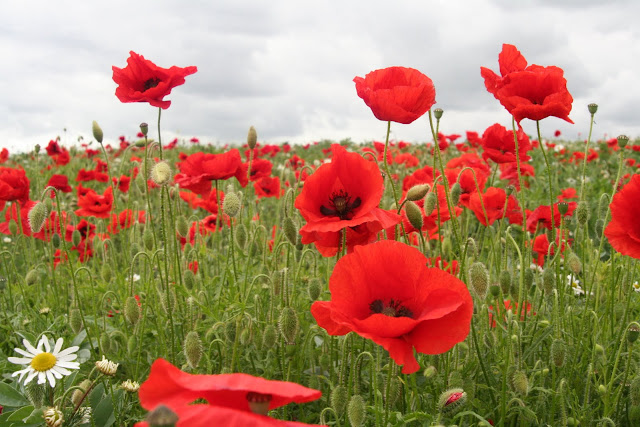 The last stop for the day was Summer Leys nature reserve. Plenty of breeding activity with Common Terns and Black Headed Gulls all with chicks on the island, and Lapwings and Little Ringed Plovers with young on the scrape. A nice touch was a Cuckoo landing in a small bush in front of the hide, and also the total count of 172 Mute Swans on the main lake!

Wednesday 22nd June 2011 - Norfolk here we come!
Today Matt, Big Jake and myself headed over to meet another mate of mine, Kieran Nixon, in Norfolk. As nothing really unusual had been reported around here we had just 2 birds on the hit list with the hope that anything else would be a bonus. We started with the first of the birds, that being a fairly long staying Marsh Warbler at an undisclosed site. The bird had been here for over 3 weeks and as the finders wished to keep it quiet we have to respect their wishes so I'm afraid no locations will be given out here. Lets just say though it was a cracking bird, and the song was incredible with mimicry of Skylark, Greenfinch, Chaffinch and Bee Eater just to name a few. It was showing very well too sitting up on the tops of the reeds rattling out it's song. From here we headed towards Horsey to try and find the Red Footed Falcon that has been here for a few days. No sooner had we got out of the car a falcon sp. could be seen flying over some trees in the distance. We watched it through bins and then I managed to set my scope up and found it in that. It was hovering occasionally, but not like a Kestrel as it rode the wind with straight wings and closed tail and then it swooped below the skyline and I could get all the colours in my scope - Red Footed Falcon in the bag! Thats a brit tick of 260 for me. Unfortunately the weather really closed in and after we all got soaked we started heading back. Shame we couldn't get better views of the Red Footed Falcon but at least we still saw it.

Thursday 23rd June - Rutland Water
Matt and I spent most of today birding Rutland Water in Leicestershire. As there was nothing exceptional being reported we just did a bird list and enjoyed a day out at the reserve. We managed to build up a list of 57 species of bird in total, with the notable exceptions of Osprey and Tree Sparrow but we were at the wrong end of the reserve for Osprey and the Tree Sparrows should be off breeding somewhere. Anyway highlights for me were at least 3 Green Sandpiper, 1 sum plum Black Tailed Godwit and 3 Avocet. Never mind still a nice day to be out and Matt saw a lot of stuff he hasn't seen for a while so thats good. 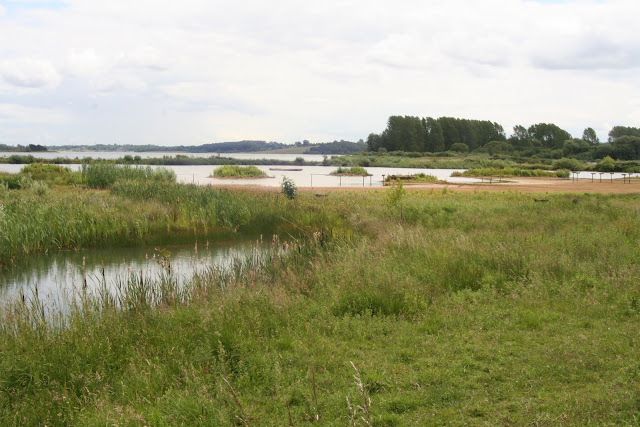 Friday 24th June 2011 - Fermyn Woods
The weather this morning was exceptionally warm and sunny. So the thought of butterflies emerging at Fermyn made me decide that we should pay a visit on what was Matts last day here. I wasn't holding my breathe for Purple Emperor as it was still quite early but I had my fingers crossed for White Admiral. As luck would have it we counted 4 White Admiral flying around an Oak tree just 10 minutes into the walk, and at the crossroads a Large Skipper was nectaring just inside the edge of the woodland. 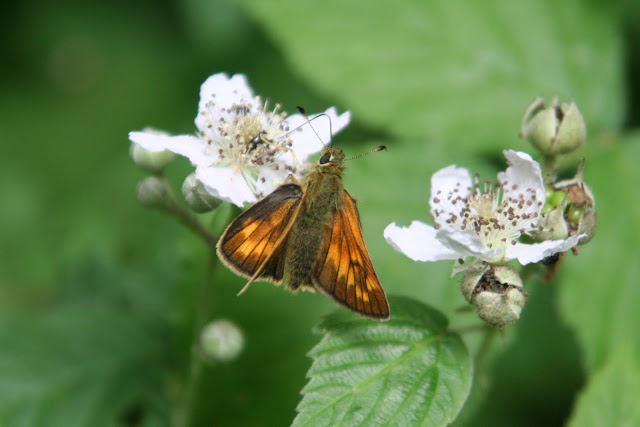 As we carried on walking around to the top ride even more White Admiral were on the wing and thats when we met up with a guy who had seen a Purple Emperor a few hundred yards along the path we were walking along. Soon after we had a newly emerged Purple Emperor taking salts of the path right in front of us. To say I was pleased for Matt was an understatement as we really didn't think we'd see one of these on this years visit as they normally emerge later. It was almost tame as well and really didn't mind photographs, with Matt at one point having lens just inches away from it, and it even posed for a couple of videos. 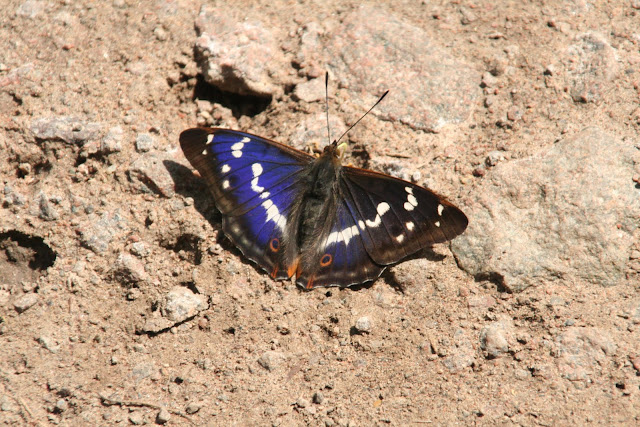 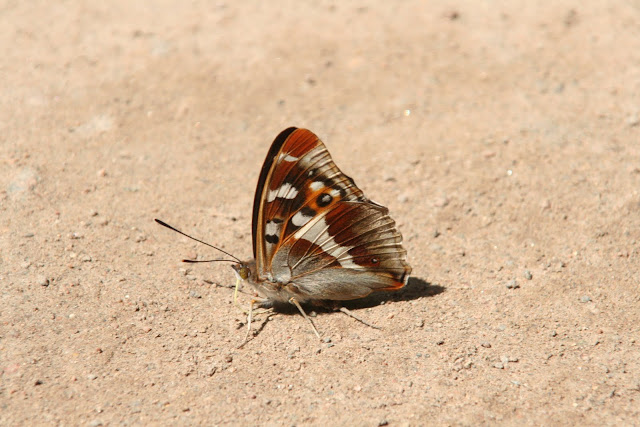 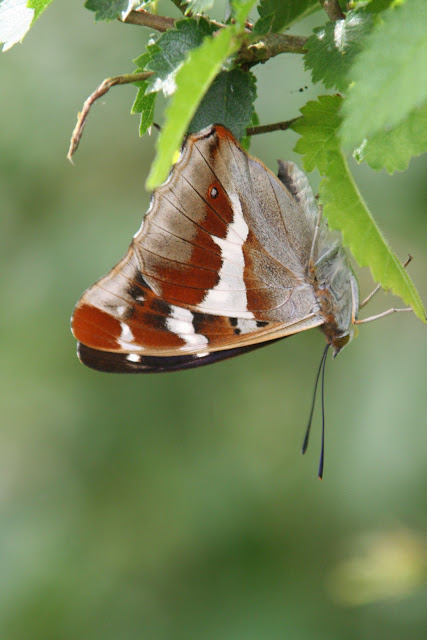 That concludes the update. We had a good time with some nice sightings. For me the Red Footed Falcon and the early Purple Emperor were the highlights, and Matt had a good time too catching up with things he doesn't normally get to see. All in all a good week!!
Posted by David James at 14:24