This was the Queens Diamond Jubilee weekend and while the rest of the nation was either at street parties or infront of the tv I was travelling all over the place in the pursuit of some very good birds. Nightjar have been on my to-do list for years and for some reason I just never seem to get round to it, so this year I decided to put that right. On the Saturday evening after finishing work I quickly got changed and headed for Norfolk arriving at Kierans place early evening. Another local birder, Johny Diego Prochera, also joined us as we headed out to a place fairly close to Norwich to see what we could see. A local rave seemed to be tuning up in the background when we reached the site which took our minds slightly off the matter in hand but after a while a Nightjar started to chur and then as we moved around to get a better look at the area it was coming from had the great view of the bird flying into the clearing before holding up it's wings a parascending down to earth showing it's white wing and tail spots in the process. It was good place to be in as darkness fell as deer started to bark, Tawny Owls started to hoot and a few Woodcock coming really close flying over head calling away. We didn't see anymore after this but had a couple churring away in the gloom, but after the view we had we could all still leave happy with the evenings vigil. The following day I woke up on Kierans sofa and started to look at the information services to see what was being reported, the main bird of note that was shouting out to me the most was the Roller at Aldborough in East Yorkshire and as there wasn't much about in Norfolk we went pretty much as soon as Kieran got up. After picking up a guy who'd requested a lift from Norwich we started the journey and reached the site at about 3.30pm. The bird could easily be seen from the car as a bright blue bird stands out a lot against a brown muddy field. It was quite mobile and spent a lot of the time flying about in the field before the rain started to come down and it popped onto the famous post where everyone has been taking pictures of it! What a cracking looking bird!! 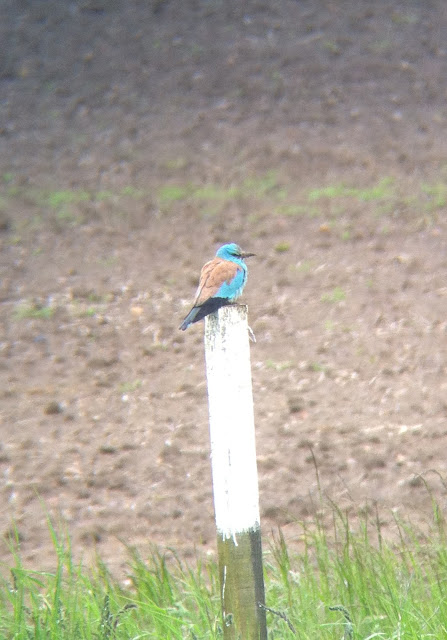 After this I had the delightful prospect of a six hour drive back to Northants via Norwich as I had to be at work the following morning. My birding mate John Taylor had text earlier to see if fancied heading back out to Norfolk on the Tuesday so never one to turn down a days birding I of course agreed. Tuesday morning John  arrived at mine at 6am we headed straight to Lackenheath Fen getting there for 8, a Golden Oriole could be heard singing it's flute like song about half way to the watchpoint and while we were trying to pick it out John luckily turned around in time to catch a Bittern flying behind us! We had heard at least one Bittern booming on the way to this point but it was great to see one in flight. We abandoned the Orioles hoping to catch up with one later and headed further along the path before reaching the end of the reserve. A quick scan of the vast reedbed got loads of Marsh Harrier with quite few Bearded Reedling pinging about too. A Barn Owl flying back to a nest site carrying a vole was a nice surprise in broad daylight and after waiting patiently for it to emerge again ( it didn't! ) we went and took a seat at the watchpoint and sat here admiring the view of a couple of Marsh Harrier food passes and the sound of booming Bitterns. After a while we started to head back into the reserve, this time giving the Golden Oriole a bit more attention. The bird was obviously moving about in the trees quite a lot as the direction of the sound was continually changing. We positioned ourselves along the path and John was lucky enough to get a glimpse of it zipping through the canopy. We kept listening and searching and gradually the bird moved right. A lot of the birders then headed in that direction but I kind of had the impression it would probably start to move back over to the left as a little bit of a pattern in it's movements was starting to form so I chanced my arm and stayed put. John and I scanned and scanned and then it popped out right on our side of the trees looking gorgeous in the morning sunshine - bright yellow, black wing and a bright red bill! Great stuff! Whenever I have had views of Golden Oriole in the past I can't help thinking that the guide books just never to them justice, no matter how bright the illustration or vivid the photograph they always look much brighter in the flesh. That and the hunt you have through to see one I think makes getting a view like this so much more worhwhile. From here we headed out towards the coast and meeting Kieran at Bunham Overy. We had a quick walk round after introducing John and Kieran to each other with not much to report so after a quick set of directions off another local chap we headed off for a look at a Montague's Harrier. We didn't have long to wait in the area we found ourselves in before a ringtail Monty's was whirling away above a wooded area before she climbed up high onto a thermal, hung there for 15 minutes, and then treated us to a superb acrobatic display in the air with lots of swoops and dives before she flew down and settled in the woods again. From here we nipped to Choselely Barns to listen for Quail. No Quail unfortunately but quite a few Corn Bunting were about singing their jangly song from various vantage points and the good local Hare population were putting on quite a bit of entertainment too. Titchwell was the next stop and as always it didn't disappoint with loads of Little Gulls on the freshmarsh, a fly over Spoonbill, a leucistic Pintail spotted by John, Avocet all over the place, several Little Terns over the sea and a few Sanderling running along the coast. As it was now getting quite late we headed for the last port of call, this being Dersingham bog. Following the directions of a local birder Rob Smith, and a little pointing in the right direction after we got a bit lost and he had to come over to show us the right place, we found ourselves standing in the middle of the bog next to some trees. This was the good news, as in we were now in the right place, the bad news is the rain was now starting to come down. We heard a Nightjar churring around the corner closely followed by a call from Rob to say he had seen one fly over his head as he was on the way back to the car. The Nightjar then flew in our direction before wing clapping and settling for a while. Then up it came and flew right passed us within 20 feet or so! Then the rain started to really come down again so after listening to a distant chur of another Nightjar and a reeling Grasshopper Warbler we called it a night. All was quite except for the Woodcock which had been flying over us since we arrived and didn't seem to be put off by the rain and gloom. We made our way slowly to the car in the darkness, what a great day! We should really come here more often!!