Yesterday afternoon while I was trying to dry out after the Pitsford soaking I received a phone call from Kieran, a close birding friend of mine. He offered me the chance to join him and a few others to see the recently discovered Common Yellowthroat in Wales as they were passing where I lived and just so happened to have spare seat in the car. As I have already mentioned in this blog I had originally decided this year to stick to Northants but the promise of a new mega and the soaking I received yesterday made my mind up to go with them. So my alarm went off at 3am and I crept out of bed trying not to wake my better half, got in the car and drove to the pick up point in Finedon, a couple of hours later and we had reached the area where the bird had been found and by 7.30ish we were climbing over the stile and walking up to the now famous hedgerow. Twitching can sometimes be a test of patience more than anything else and after a long drive you can end up waiting for hours in order to see the bird you are after in a desperate bid to make the long journey worthwhile. Today though thankfully wasn't one of those days and within minutes we were all on the bird getting fantastic scope views as it crept about in the grass with it's bright yellow chest almost glaring in the bright mornings sunshine. Now to say this was a result is an understatement, not only had we seen the reason for coming here but we had seen it straight away so by 8am we had the whole day to play with. The next bird we went for was Bonaparte's Gull in Cardiff but our luck suffered a temporary setback here. As we climbed the bank from the industrial estate to get down to the shore we suddenly realised the tide was out, in fact it was out a long way and all the gulls were distant. Despite this we searched for about an hour before calling it a day and then went off to the next bird on the hitlist - this being a Lesser Scaup. So we pulled up at Cosmeston Country Park and after a quick scan from just off the car park we easily found the Lesser Scaup. This bird is a textbook example of the species with a dark grey vermiculation along the back, small pinch on the back of the head and an all blue bill with the exception of a tiny black nail at the end. An added bonus was a ringed Whooper Swan standing on the side of the water next to the car park. As it was standing right out in the open you could read number on the ring on it's leg and with a little research I have discovered it was ringed in January Worcestershire and is believed to be Icelandic in origin (number Y59, BTO number SS8778). You can even read the number in this photo. 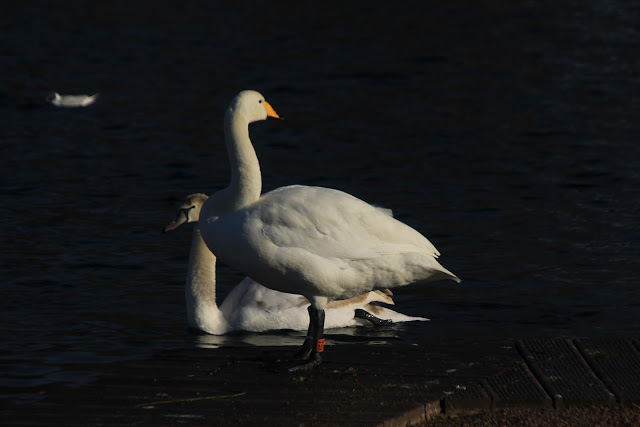 After this we popped over to another site to try and find Dipper but despite a thorough search we failed to locate one so we returned to the car with another twitch in mind. This being the unthinkable prospect of heading down to the south coast to go for the Spanish Sparrow. By now it had gone midday but we knew if we got down there quickly enough we were in with a chance and perhaps even the Dark Eyed Junco in the bargain at the same time, but again it was a gamble as the Spanish Sparrow was know to go to roost fairly early and by 3pm was elusive. After a quick chat we decided to go for it so jumping in the car we headed down to Calshot in Hampshire. Soon after we had arrived we were told the bird had flown about 1/2 an hour previously and the presence of a large female Sparrowhawk in the back garden of one the houses was keeping all the birds heads down so we split up and waited. After about 40 minutes we were told that the Sparrowhawk  had departed and soon after this the birds started moving again. I should have pointed out earlier that this site is made up of a large hedgerow along the side of a road with a block of terraced houses starting at the road and going down the hill. The bird has been spending a lot of it's time in people back gardens but seems to be doing a circuit of the area along with all the other House Sparrows so when they started to trickle into the hedge I was standing next to it was very encouraging (the even present threat of dipping is always at the back of you mind when twitching) and within minutes the chap next to me gave me a nudge and whispered "there it is". I couldn't believe my luck, it had landed in the hedge right next to me and just sat at the top singing away in bright sunshine allowing me to get a few pics of which this is the best. 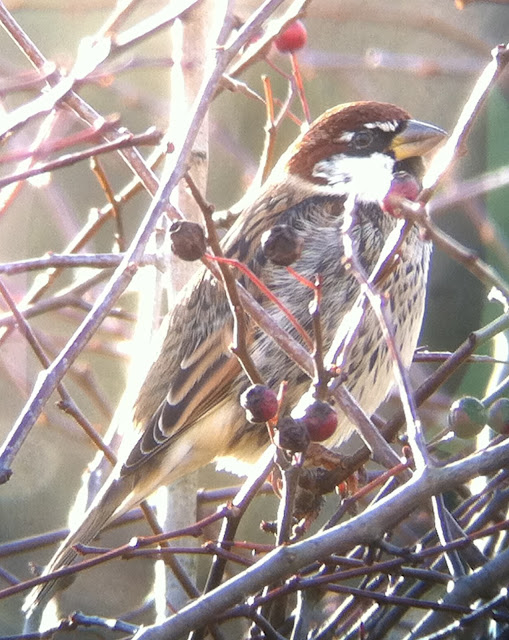 What a cracking bird?! We knew we only had a short period of daylight left so we jumped in the car again and headed to the New Forest this time hoping to see the Dark Eyed Junco. We found the car park and located the fallen pine tree where the bird had been frequenting and again waited. We were told it had been spending the day flying around with a few Reed Bunting and a quick look up showed something we didn't want to see - in the tree above us the Reed Buntings looked to be going to roost. This was a really bad sign as the light was now starting to fade and I think everyone there had everything crossed hoping it would show one last time. There seemed little movement at all before a few birds flitted about, a Chaffinch here and a Robin there before Kieran exclaimed he had it in the foliage of one of the fallen trees. We were all on it quickly and got spectacular views (even getting a pic, see below) before it flew closer and fed on the ground infront of us. 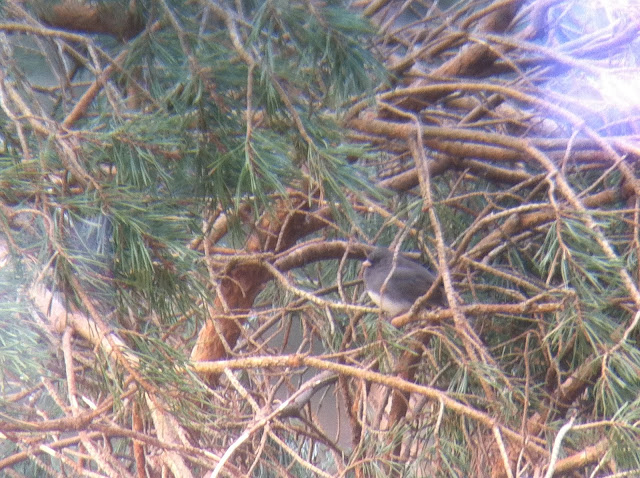 After this we did have it mind to go for the nearby Ring Billed Gull but the distance to be driven and with darkness falling (not to mention the long traffic jams through some roadworks) it became clear that it would happen so we started the drive home. I have been birding for 7 years now and I can honestly say today was one of the best days out I have had in this obsessive hobby in all that time. Only one day from the past comes close which was a couple of years ago when in the autumn me and Kieran were battering the north Norfolk coast and just seemed to see everything we went for. It was a cramped day with 5 big lads squeezed into a Honda Civic but that all adds to the fun and today will not be forgotten in a hurry. Also of coarse many thanks to Oliver Reville, Robert Smith, David Norgate and Kieran Nixon for letting me join them on this epic twitch!
Posted by David James at 21:22