This weekend I decided to bird a fairly local site just over the border in Cambridgeshire called Fen Drayton. Its an excellent place to visit with lots of reedbeds and an impressive list of birds to see. Its also fairly large so it is easy to spend the whole day here and not get bored. I started coming here late last year as its Starling roost was very impressive with up to 12,000 birds on our last visit. Bitterns are present here too during the winter and at the end of last November me and a couple of friends (Matt and Kieran) was awarded with excellent views of a Bittern flying around one of the smaller lakes. Today I met up with another mate of mine, Pete Bateup, and we got to the reserve at about 9.30 and started our walk around Elney Lake. It was a glorious morning with not a cloud in the sky, still quite chilly though but a real pleasure to be outside. From the car park and path down towards the Elney part of the reserve we had Coot, Carrion Crow, Great and Blue Tit, Bullfinch calling, Chaffinch, Little Egret, Tufted Duck, Goldfinch, Mute Swan, Goldeneye and Black Headed Gull all within about 300 yards. As we started the walk around Elney Lake Long Tailed Tits were in the hedgerows along with Dunnock, Wren, Robin and a very vocal Cetti's Warbler. On the lake itself there was lots of Goldeneye, with some obviously pairing up, Gadwall in small numbers, lots of Teal and masses of Wigeon. From the first screen we had a Great Spotted Woodpecker calling and a Green Woodpecker yaffling in nearby farmland. Predictably with the fine weather the raptors started appearing mid morning and fantastic views of a male Sparrowhawk hunting the undergrowth along the lakes shoreline were had along with a Kestrel flying along the trees on the opposite shore and a superb view of a Peregrine riding the thermals above us with its tail fanned out. Grey Herons were dotted about, and few Mallard were here and there along the edges. A pair of Goosander flew in too but landed just out of sight on the other side of a small island. Continuing the walk produced Blackbirds and yet more Goldfinch (me and Pete thought we heard Siskin hear too but after a brief search couldn't locate them - a brief chat with the local RSPB warden later in the day confirmed that they were and here and were seen later that day) and a singing Greenfinch and Song Thrush near to some wasteland. The second screen had good views of a pair of Smew with a first winter male and female, and a quite close view of a Redhead (female) Smew right infront of the screen on the along the opposite bank. Canada Geese and Common Gull were also added to the list here too. The pathway to this screen also produced a Bumblebee which I was told by the RSPB warden later is the first one for the reserve of the year - no doubt woken by the warm spring weather. Unfortunately the warm spring weather started to deteriorate quite quickly by around midday and a few spots of rain started to fall, so the birds were not as active as they once were. A pair of Oystercatcher were displaying to each other and generally being noisy on the second lake we came across. This lake is called Moore Lake, and it was full of Gulls but unfortunately no large Gulls were present just lots of Black Headed and Common, and 2 female Goosander too. As it was starting to rain we headed the the other side of the reserve (passing the car so I could get my camera out of the rain) and made our way over to the Ferry Lagoon. Here were found at least 8 Pintail with some cracking looking drakes, and hundreds of Wigeon. This whole area looks absolutely brilliant for returning waders, and it contains lots of flooded bits - in fact I reckon when the wader passage starts you could probably spend the whole day just looking around here it looks that good (lets hope it stays flooded). We also added 2 Shellduck, Lapwing, Moorhen and an adult Lesser Black Backed Gull with 2 first winters. On the way back to the car Fieldfare could be heard chattering away and Skylarks signing above the fields - this bringing the total bird list up to 50 so far. Upon returning to the car park we had a quick chat with a few of the locals and they put us onto a small section of new trees planted by the road on the way out of the reserve as 2 Corn Bunting had been seen there in the morning. When we found the place in question it was literally crawling with passerines, with more Yellowhammers than I think I have ever seen. A pair of Stonechats were working their way along the ditch while the trees were full of Fieldfare, more Yellowhammer and some Siskins adding a bit more colour to the mix. A fairly large flock of Linnets too were in the fields just on the other side of the trees. We never did find the Corn Buntings unfortuantely, but there were so many birds that finding them would have been difficult and as we had already had a fantastic day we decided to head back home a have a pint of beer in the local. I don't think I will be leaving it long before I'm back here and I think I may have found a new favourite place! Shame we never saw or heard the Bittern though, but then you can't have everything. 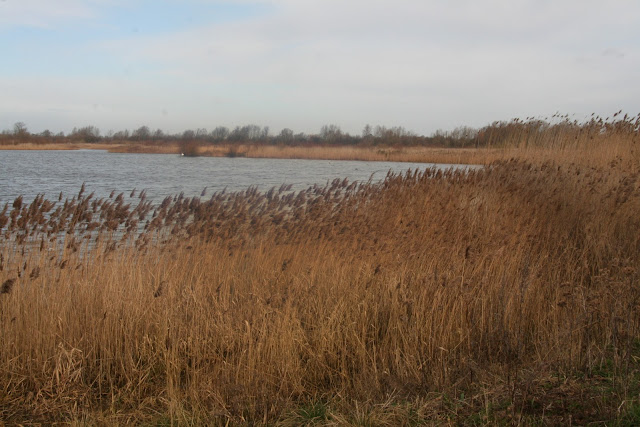