At this point the whole reason for coming out to today was remembered with 2 Sand Martins overhead, calling as they went. The first summer migrants on the 13th! Last year I had to wait until the 23rd for my first Sand Martins of 2010. Most ironically though how many people have seen an arctic bird such as a Glaucous Gull on a lake with 2 Sand Martins fresh from Africa overhead I wonder. We left Steve to return to searching for the Mealy Redpoll and Jim and I walked up to the river. By now the sky was perfectly clear and it was a lovely early spring evening, two Kestrel were taking advantage of the extra warmth and were both riding on the same thermal no doubt displaying to one another. A cracking view of a pair of Bullfinch was also to be had along the river as they ate the buds as they bloomed - a superb sight with the male bird at the top of the trees in the sunshine. We then returned to wait at the Gull roost to see if anything interesting would come in. The Glaucous was still present this time swimming on the water so was a little bit harder to locate especially as the sun was going down down at this point.


Steve came and joined us after finding our previous Mealy Redpoll and confirmed to us that it was indeed a Mealy in his opinion. So we then spent the last few minutes of light watching all the Gulls coming in to roost. Despite searching we didn't find anything rare, a Black Headed Gull was an interesting bird though as it was partially albino and the left hand primaries were pure white except for a tiny black dot as they went under the greater coverts, and the right hand side primaries had a black square at around p8 but the rest was white also.
So from here I called it a day and returned to the car as darkness fell, still loads of Gulls kept coming in all away along the valley they could be seen heading in this direction to roast on this one lake.

Jim had very kindly given me a copy of his 2011 Whisky Bible, and it is a book which I can recommend to anyone with an interest in this particular drink. He has an unbiased approach to his reviews and uses language which is comical and easy to understand whilst being very informative at the same time. I'm sure you'll be able to find it in any good bookshop (and no doubt a few dodgy ones too) or you can order a copy at  http://www.whiskybible.com/. In fact I really do wish that all reviews could be written in his style - at least we'd all know what we was getting!

So what a cracking end to a fantastic day. Some great birds and bird behaviour, a new birding pal in the shape if Jim Murray, and after leafing through his book a glass of Whisky to see the final hours off nicely while I reflect on todays sightings. Good wildlife watching everyone...........and cheers!!! I just need to start saving for that bottle of Ballentine's 17year old now. 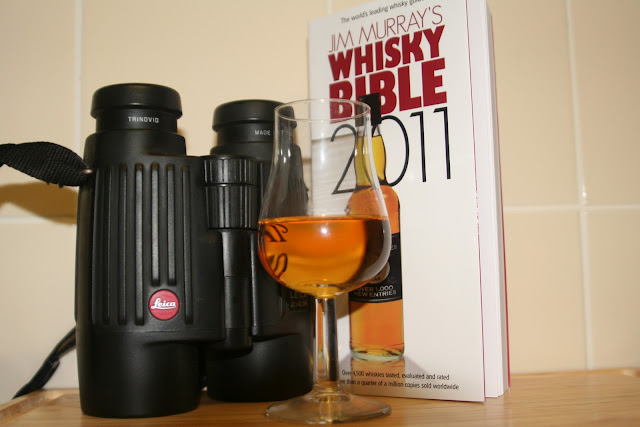