Things have felt a little slow since the last post but the eagle eyed among you may have noticed the "Cloud of Clouded Yellows" post getting longer and longer as more revelations appeared at the site. On the 24th of November the lure of the recently discovered flock of Parrot Crossbills at Holt Country Park proved too good an opportunity to miss and we headed over early in the morning. We (John Friendship-Taylor, Sam Candy and Jon and Kirsty Philpot) had a quick stop enroute to see 4 Common crane in the usual field opposite the "Chill Out" cafe at Guyhirn and then we drove straight to Holt. We met up with local birders Kieran and Rob and had a catch up in the car park while waiting for the flock to work their way around to our area. Soon enough a birder standing by the car park entrance waved his arms and we shot round to be greeted with at least 9 Parrot Crossbills feeding in a pine tree by the side of the road. After having such good views of Two Barred earlier on the year I was very keen to see these and they didn't disappoint as they showed very well feeding on the cones. Below are some John Friendship-Taylor's shots of the birds.

We left here to pop round the corner to see the Glaucous Gull and then headed to the coast to hopefully catch up with a  Black Brant. We headed up to Salthouse and walked along the beach before finding a large flock of Brent Geese in a field near to Kelling after having a quick scan we picked out a Black Brant tucked in with them.

We also managed to get great views of one at Cley as it fed in a field by the road. The below photos are digiscoped and really don't do the bird justice as it looked amazing in the sunshine.


We gradually birded along the coast before heading home. We did the obligatory look down the Wolferton triangle and we were pleasantly surprised to see a Golden Pheasant standing in the middle of the road as soon as we pulled in.

The next really productive day was on the 1st of December. The inland counties were seemingly under a mini Long Tailed Duck invasion and Northants was no exception with birds seen at Pitsford and Thrapston Gravel Pits. In keeping with my run of luck this latter half of the year everything turned up while I was at work and as the weekend gradually approached a trip to Thrapston was on the cards. Luckily though a Long Tailed Duck was discovered at nearby Summer Leys and very soon after another two were found on the same lake. Me. John Friendship-Taylor and Jon and Kirsty Philpot went the following day and had incredible views of all three on a still morning. They put on quite a show as they preened and fed in a back water of Mary's Lake. From here we moved onto the Ditchford Gravel Pit complex to check out the Gulls. There were a lot of birds in the area and we started to go through them. As I was trying to pick out a possible Caspian John Friendship-Taylor noticed an adult Iceland Gull walking along the back of the group. A phenomenal spot by him considering the amount of birds in the area and as the birds in front gradually moved around it came more into view. This was my first adult Iceland so I was very happy being happy to see it but unfortunately though the local Red Kite population were doing regular sorties across this field and in the process they were constantly flushing the Gulls. It wasn't long before it flew and regrettably it wasn't relocated despite a thorough search. Another one of the star birds in the area though was a mobile Great White Egret. It had been seen previously in the day further east up the valley but as we left the area the Iceland Gull was in we accidentally spooked it from the Viaduct pit. We checked all the Gulls in the area before walking underneath the viaduct and onto the next gravel pit towards Wellingborough. The Great White Egret was seen in a corner of the lake and I couldn't resist using Jon's borrowing Jon's lens to get some shots. I managed to get some shots of the bird in the water before it flew, and after doing a couple of laps of the far end of the lake it flew straight over my head and back towards the viaduct pit. It looked amazing in the sunshine and I am very pleased with the images I was able to achieve.


On the 8th of December we had a quick trip to Grafham to see the inland Velvet Scoter. We had to do a bit of searching ,seeing another inland Long Tailed Duck, but eventually we saw it fly into the middle of the reservoir from the dam end. It was a real treat to get such good views of a Velvet Scoter as all my previous views had been of birds either bobbing up and down on the sea or distantly flying with lots of Common Scoters along the coast. We watched for quite a while as it washed and preened before it flew back towards the dam. We left here and had a good look round Ecton SF on the way home but apart from a couple of calling Chiffchaff we saw little of note.

The best bird of recent weeks (and perhaps the bird of the year for me) though has to go to the recently found Hume's Leaf Warbler found by local birder Neil McMahon. It was found at the weekend at a site to the north of the county and as the site is strictly private access had to be arranged for people to come and see it. Neil and Eleanor did an incredible job organising the day and a huge pat on the back to them both for negotiating with the landowners so people could come and see it. It's not very often you get signposts telling you where the bird is. 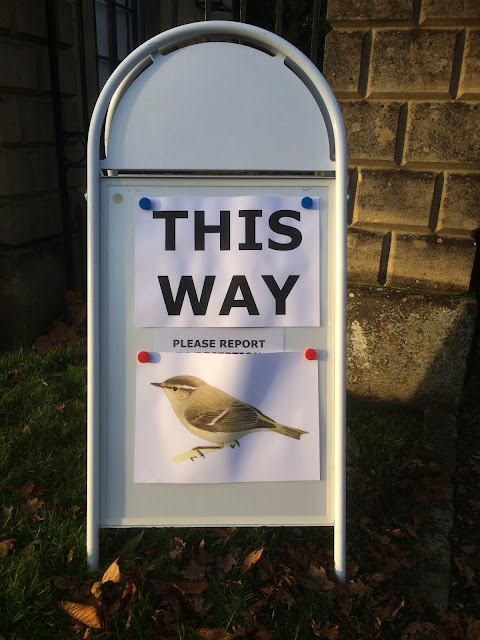 Me, John Friendship-Taylor and Sam Candy arrived at the site at 12.45 and within minutes of parking the car we were viewing the bird. The sun had fortunately started to shine shortly before we got there and the bird was taking full advantage of the weather to feed along the row of trees. It quite often liked to come out into some of the tall bare trees giving incredible scope views as it busily fed and called away. In fact the bird was so vocal when we were there that keeping up with it wasn't a problem a lot of the time. Unfortunately as the bird was so flitting digiscoping some pics was impossible but I will have the memories for a very long time and I have a feeling it will be one of those talked about birds for years to come.  Luckily though there were plenty of photographers on site and one of them was Sam Viles who has very kindly sent me a shot of the bird which is below.

As a nice touch we drove home via the Pitsford reservoir causeway and easily saw one of the Great White Egrets from the car standing at the mouth of Holcot Bay.

It's been a great end to a fantastic year! I did start county yearlisting from the beginning but as more and more birds appeared that I couldn't get to due to work I pretty much gave up. Bizarrely I went for everything I could last year and only got to 169. This year I have taken things in my stride and missed a few birds along the way but still got to 168! With two of those birds being the Woodchat Shrike and the Hume's Leaf Warbler which will very probably not be easy to see in the near future again. I am toying with the idea of keeping it local again next year, in fact during January I have decided to keep it very local and I have signed myself up to the "footit" challenge (by the time I heard about it this year it was too late) so it will be interesting to see the results. As there isn't much variable habitat a mile from my front door I have set myself the challenge of seeing 50 bird species which I am hoping shouldn't be too hard to reach. But then as this year has been full of surprises perhaps I should write the county yearlist off just yet.