The long spells of bright sunshine that had been such a key factor in the brilliant couple of days "Emperoring" during the previous week unfortunately came to an end and by the weekend of the 20th/21st things had darkened up a lot. It was still hot but the prolonged sunny spells seemed a distant memory as thick cloud covered up most of the sky. Despite this though me, John Friendship Taylor and Sam Candy persevered and tried to make the best of a gloomy day butterflying. We started off at Twywell Hills and Dales to look for Marbled Whites and we didn't have to look for long before the first one could be seen whirling along the tops of the thistles. The wind had also picked up which was making getting one to pose for a photo a nightmare. I took John and Sam up into the Gulley section hoping the added cover up there would provide the butterflies with some protection, which of course means they'll be easier to photograph. We were awarded quite quickly with the sight of several Marbled Whites flying around in the gulleys and staying still long enough for John and Sam to get pics. I decided to let them have the pick of these as I have got some good shots in the past so I wandered on the try and find my first Brown Argus of the year. I unfortunately failed but as the weather was the way it was I didn't really have my hopes up too much. One butterfly that was out in force though were the Essex Skippers. These look almost identical to the Small Skipper with the exception of having black undersides to the tips of the antennae which can be surprisingly difficult to spot. You have to get almost face on and look underneath which is harder than it sounds as Skippers can be quite jumpy at the best of times but with today's lack of sunshine they were luckily quite sluggish. This of course meant I could take a lot of pics of one without it being too bothered about the intrusion. I really like the photo below. It shows the key features of the identification with the black tips to the underside of the antenna, but also shows the butterfly from a perspective you don't normally get to see.
After enjoying this little butterfly I went and explored around a little more while the others were getting their fill of the Marbled Whites but unfortunately the only nice find was a Meadow Grasshopper trying to keep out of the way of the wind. It kept very still while tucking itself up on a leaf deep in the centre of a bush.

While I was busy taking the above picture Sam took the opportunity to try out his new camera on me. There aren't a lot of pics of me on this blog as I am always behind the camera so I thought I'd share it. This is the position I seem to find myself in on most of my days off while I am creeping around in the undergowth!

After exhausting this site we left and headed up to Wakerley Woods in the north of the county. Lots of Two Barred Crossbill had hit the Norfolk coast the previous day and as this is a very good Crossbill site we though it would be worth a go. Sadly though we didn't hear or see a single Common Crossbill let along find it's rare counterpart. We did have a nice walk though with some very good butterflies along the way. As this is one of the most reliable sites in the county to see Crossbills an annual visit here always comes up with the goods when yearlisting, and the fact that the car park is the best place to see them means I have never ventured much further into the woods. today though we went much further into the wood, almost purposefully getting lost and then making our way back again down some less well marked rides. I had no idea what an amazing site it was, and of course because we were off the main paths we had the place to ourselves. During our walk round we had at least 4 Silver Washed Fritillary grace us with their presence. These have to be my favourite local butterfly and I can watch their characteristic flight for hours, I just love the whirling wing beats and then a glide. I cannot think of anything better in the summer than the sight of one of these making it's way across a woodland glade through the dappled sunlight shining through the canopy above. I have always had trouble in the past getting the "Silver Washed" part of the underwing and today was no exception so I will have to make do with a glimpse of the underwing instead. Here are the pics of a particularly confiding Silver Washed we found not too far from the car park.


We also had some good views of White Admirals too. These can also be a pain to get good photos of as the normal view is often of the "chequerboard" shooting through the forest without stopping but luckily while we explored a fairly overgrown path one did and I grabbed the opportunity to grab a pic.

We also found one of the bigger Longhorn Beetles which caused quite a stir. This species are called Stenocorus Meridianus which are big anyway but this one was a monster!

We returned to the car park and headed off to Fermyn Woods with the hope of finding a Purple Emperor for Sam who had never seen one. Unfortunately we were met with a lot of sullen faces as people who had been there all day hadn't seen one on the floor. The cloud still hadn't lifted even now and the Purple Emperors seemed far too occupied chasing each other around at the top of the canopy instead of coming down to the ground. We carried on though and were rewarded with good views of a couple of pristine Purple Hairstreaks and great views of lots of Emperors flying around the tops of the trees but despite walking through Fermyn and down into the bottom section of Lady Wood we still didn't get any grounded. Never mind we still had a great day and there is still time for Sam to get the Purple Emperor pic he wants. The last butterfly pic I will share with you is a Small Tortoiseshell butterfly seen along the River Nene on Monday night. It's great to see such a common butterfly showing it's colours off so well. Like a lot of the common birds that can sometimes be a little disregarded (Starlings for example are stunning in the right light) I think Small Tortoiseshell and Peacock butterflies tend to get a little overlooked.

To end the weekend chasing butterflies I did what I think is right. Everyone has heard of the RSPB and Wildlife Trusts, and quite rightly so as they do a lot of good work for wildlife, but for those that are butterfly enthusiasts there is Butterfly Conservation too. I don't normally promote stuff on here but as I am already a member of most of the big conservation groups  I decided after enjoying the butterflies so much this year to contribute towards Butterfly Conservation too, and if you like butterflies I urge you to do the same. Lets hope the sun is shining next weekend! 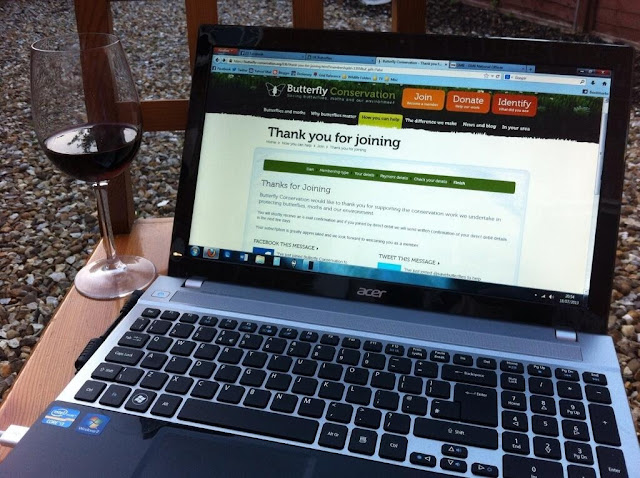