County yearlisting can sometimes be a frustrating business. Not seeing birds you should be able to see easily  (it took me a full 6 months last year to see Kingfisher) and also having to re-look for those hard to see species that can take a lot of time and effort to finally get a glimpse of. Chief among these is Bittern! Bitterns aren't that unusual in Northants during the winter but that doesn't make them any easier to see. I have been lucky enough in the past to have some good views in the county, in fact the best views of Bitterns I have ever had have all been "in county" with at least 3 on the deck but most of the views I have had elsewhere in the UK have been fly overs. So knowing this year I was going to have to see one to add it to the list I was very pleased when a bird appeared at Ravensthorpe Reservoir and seemed to stay in the same spot fro over a week. My mate John Friendship-Taylor had been texting me to say he'd seen it the previous day while I was on a twitch to see the Pied Billed Grebe so I got up early and arrived on site just after dawn. I had to wait a while, in fact and hour passed while I patiently scanned backwards and forward along the reed fringe, but eventually I spotted a movement behind the dead tree. The movement came closer and then a Bittern climbed up over a trunk and stood out in the open. Fantastic! What a view! It slowly moved it's head down to the water and tilted it's head to one side as it dipped the side of it's bill into the water and had a drink. I then had at least half an hour of incredible views as it crept around while snaking it's head around the cover to look for fish. I did manage to capture a video which I have included below, apologies for the shake but it's Iphone Digiscoped - it also comes more into view about halfway through and I recommend you set it to the highest picture quality you can too!


After this successful start to the morning I then went over to Pitsford Reservoir to see what was about. I wasn't after anything in particular but after yesterdays twitching I had to an urge to bird a site for the rest of the day. I had a slow walk round the whole of the nature reserve and then after meeting up with John we had a walk around Maidwell but there wasn't much about of note, wildlfowl numbers had really diminished at Pitsford as the recent cold snap had covered a lot of the water with ice. The Great White Egret that had spent  the winter here though did put on a real show as it flew up and down Walgrave Bay. It was a nice relaxing end to a manic weekends chasing rare birds. I'll leave this post with a pic of the Great White Egret giving one of it's many "fly by's" of the morning. 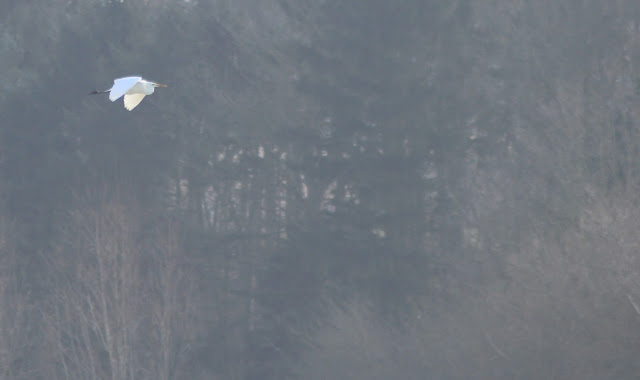