News had been trickling out over the previous week that a small group of Waxwings had been frequenting the berry bushes near Homebase at Sixfields in Northampton. As mentioned in the previous post my birding is becoming limited to the weekends now as the nights rolling in means I cannot get out of work in daylight. I did manage to get to the area on the Wednesday night after work at dusk but to no avail. Also on the Saturday morning I had to pick up a parcel at the nearby post office and gave the site a look but didn't find any. I then received a text an hour later to say they were there but they had turned up in a different area of the estate but as once again I was at work I couldn't do much about it. I received a steady stream of texts and tweets from various people throughout the afternoon but as I was at work I couldn't do too much about. It did though give me an idea of their movements around the estate. As they had been there for a few days now I was feeling fairly confident that I would be able to catch up with them on the Sunday so a plan was made with John Friendship Taylor and he got to mine first thing in the morning. We headed to the car park next to Sixfields Lake and started to head east in the direction they were seen in late on the previous afternoon. The morning was absolutely gorgeous with beautiful clear blue sky, no wind, and generous layer of frost. This has to be one of my favourite times of year - I just love the crunch of frost under foot and the crisp bite of the air on morning like this. 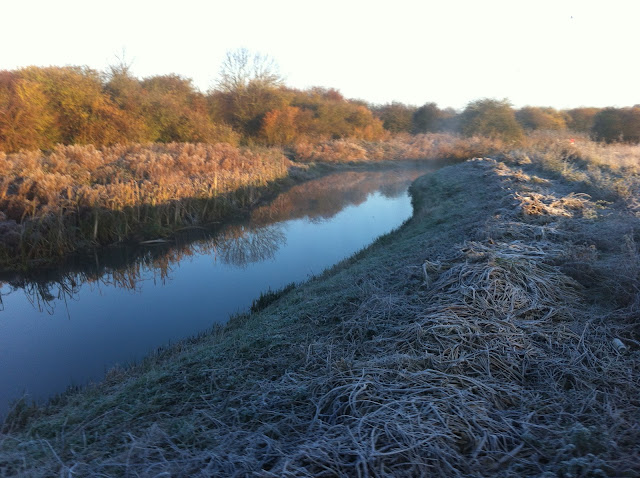 Lots of birds were about too with lots of winter Thrushes and flocks of Finches flying about. As we started to wander along the side of the lake I had a scan with the binoculars and noticed a flock of birds flying quite high up but sticking close together. The largest number of Waxwings seen yesterday was 14 but with this flock there was over 20 and as they were flying so high I was starting to wonder they were in fact just Starlings. Then though a moment of luck! They stopped flying round and round and started to fly in a straight line, straight towards us! Luckily John had managed to get his scope on them by now and got  good view as they flew along the lake and passed us and he confirmed they were indeed the Waxwings we were after. We then watched them fly into a tree behind us so we raced back along the path to view them. We counted 25 in all and they looked fantastic in the morning sunshine. Unfortunately they were perched too far apart for a group shot of them all but I did manage to get a couple of record shots. Apologies for the not so good quality but the pics are cropped and taken on the phone. 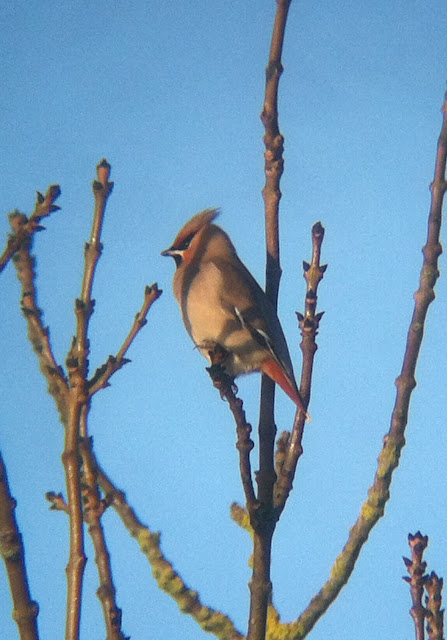 After spending about 20 minutes enjoying the Waxwings they all took off and headed towards the Lift Tower so we headed back towards the car park. By now other birders had started to arrive in order to see these birds and it then turned into a Northants birdwathers social event with a lot of faces turning up with some I hadn't seen for a while. Mike Alibone, Bob Bullock, Douglas Macfarlane (who incidently writes a great blog which you should really check out!!), Jon and Kirsty Philpot and Keith Tinworth making up the numbers. After getting our fill of socialising and enjoying the very showy Redpoll on the opposite side of the river John and me headed over to Harrington Airfield. John quickly picked up on a couple of Crossbill calling over the pine trees near the memorial which was nice as they were very vocal if not showy. A quick yomp around the area though started to show that the Crossbill may have been the highlight of the area. Lots of Linnets near the sunflower area by the straw bales and some very nice looking Brambling (we counted 5 with 3 females and 2 males) feeding on the grain put out by the entrance along the concrete track was a nice addition. After this we decided to take a trip to Pitsford Reservoir to see the Great White Egret that had turned up. It is easy to get complacent about these birds in Northants as they seem to be remarkably regular visitors to the county. Luckily for us it didn't take much finding as standing in the trees directly opposite the causeway was a stonking great white bird, in fact you really didn't need to use the binoculars to see what it was. Great scope views were to be had but no pics unfortunately as they are a nightmare to get a decent photo of, especially when you're trying to digiscope them with an IPhone - the brightness of the bird along with the darkness of the background makes exposing one almost impossible. From here we nipped off for lunch and after a large Big Mac we headed over to Blueberry Farm near Maidwell to see if any Short Eared Owls were about. The area is brilliant for Owls as mentioned in previous posts, and it is a site I look forward to coming to for it's peace and quiet along with the fantastic birds the area has to offer. Unfortunately though this romantic ideal was shattered by the sound of a trials bike warming up on the Hanging Houghtin to Cottersbrooke Road. As we stood by the southern field the sound of this bike, which was then quickly joined by another one, became infuriating. Constant revving and speeding up and down the road were soon the only sound we could hear. A Barn Owl didn't seem to be paying too much attention to the racket and was hunting silently around the field but then the bikes got closer and therefore got louder. I would just like to point out that I am not a spoil sport and I appreciate that the countryside is there to be enjoyed by a variety of people but the behaviour of this pair was awful. They were basically trying to make as much noise as they could, which to be honest I could have put up with if they stuck to the road, but they didn't. The first part of the off roading consisted of riding up and down the neighbouring farmers fields, then going backwards and forwards along the road and then they decided to head onto the Blueberry farm complex. This area is set up as a refuge for raptors so to watch someone ride straight through the middle of it on a trials bike with mud flying everywhere is a sad sight indeed. With a complete disregard they road off the footpath and headed straight across one of the fields, road around the tree with an Owl Box and across the next field and then returned in pretty much the same way. Perhaps if they had stopped we could have explained to them the impact they could be having, but to honest and perhaps a little prejudgemental I doubt if they would have listened. Anyway we met the land owners daughter as we returned back up to the farm area and we related what we had seen. As she has received more and more witness statements regarding the disturbance these guys are causing the ball is starting to be rolled to get these guys stopped, i just hope it successful. I'm not against people trial biking at all - just not on important wintering grounds for birds! Anyway I have finished the rant now. As it got dark we kept scanning the fields in the area and as the light had almost completely faded we saw a bird flying along the hedge. I managed to get the binoculars on it just in time to see the distinctive face of a Short Eared Owl flying towards us before flying up and over the hedge into the dark. It had been a good day with some very nice birds, I will admit it was marred slightly by the incident with the bikes but hey I guess we can't have the whole of the countryside to ourselves.