Yearlist Update and a Sacred Ibis in Northants! - 22nd August 2012

The last month has been spent chasing around trying to build up the yearlist, and despite things still remaining a little quiet I have managed to see some good birds. Since finally seeing the Kingfisher last month I have heard Quail at Chelveston Airfield with a singing individual just on the county border, seen 3 eclipse Red Crested Pochard at Pitsford Reservoir on one day and then returned a few days later to see the Marsh Harrier. The good thing about yearlisting birds is the fact that you have to really keep at it and go for everything, so during the quiet times of the year you can concentrate on catching up with missed birds and trying of course to find you own. I have been birding Clifford Hill Gravel Pits just outside Northampton now pretty much every evening after work. It is a very frustrating place to bird at times mainly due to the disturbance by the public who show a blatant disregard to the signs put up asking people to stick to the perimeter bank and insist on walking their dogs along the shoreline scattering any waders in the process. Despite this though I have been plugging away and I have to say there has been some good stuff trickling through. The concentrations of Black Headed Gulls here in the evenings has been quite impressive with large flocks gathering in the evenings. They unfortunately don't roost here choosing the roofs of the warehouses and factories at the nearby Brackmills Industrial estate instead so they all fly off as it gets dark but if you are here early enough you can catch them. With this in mind I have been searching through them most evenings looking for Mediterranean Gull and on the evening of the 8th of August a rather unexpected surprise turned up. I wasn't the only one with Med Gulls on my mind that evening as I scanned the Gulls on the water from the south shore as I could see the Northants County Bird Recorder, Mike Alibone, scanning from the north. I scanned and scanned and scanned but to no avail so turned my attention to the opposite shoreline to look for waders. I noticed Mike was walking around the pit at this point  and as I scanned along the north shoreline I couldn't believe my eyes, quite out of nowhere as Sacred Ibis had flown in and was having a preen on the bank. It should be mentioned that Sacred Ibis aren't on the British List as none of them seen in Britain can be proven to be genuine wild birds, most of them are certainly escapees as is this. Earlier in the year 3 Sacred Ibis escaped from a Cheshire Zoo and have been roaming Britain ever since. 2 birds appeared in Northumbia and one in Norfolk. Both the Northumbian birds flew south with one joining the bird in Norfolk south east and the other flying due south (over a raptor watchpoint in Nottingham according to one of my Twitter Followers) and I am assuming this is that bird. Here is a pic I took, it's certainly not the best but you get the idea of what it looks like. 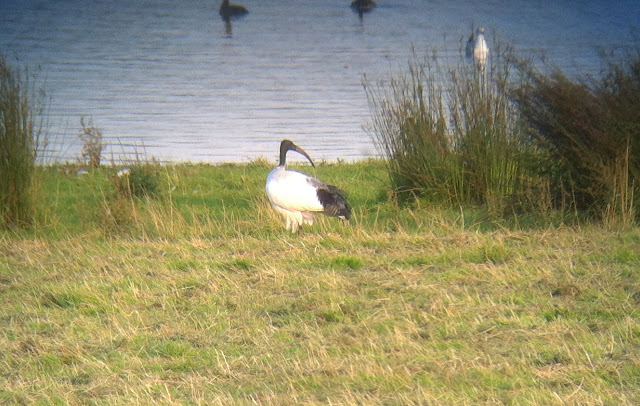 Mike and I watched it for a while as the sun went down and and I am pleased to say a flock of birds came over that I could add to the yearlist. As I walked around to the lake I noticed a flock of birds flying over.. I had somehow managed to miss every Northants Curlew so far this year and I was starting to get a bit worried about not seeing one so it was a nice surprise when I looked up and counting 13 flying overhead calling away. To add to the evenings entertainment a small flock of 4 Black Tailed Godwit came over in the dwindling sunlight and did a few laps around the north shore before heading off just as quickly as they arrived. The Sacred Ibis hung around for a few days despite being constantly disturbed by the dog walkers before eventually relocating itself to Stanwick Lakes where it seems quite happy. Steve Fisher found a Spotted Crake at Stanwick Lakes on the 14th August which got quite a few of us racing over there but unfortunately despite a lot of thorough searching (and getting eaten alive by mosquitos) it couldn't be relocated - not surprising really though as the reedbed is very dense and you need an awful lot of luck to be looking at the right place should it emerge. Another yearlist bird came on the 17th August again at Clifford Hill as the constant searching through Giulls finally paid off with a 1st summer (moulting into 2nd winter) Mediterranean Gull with all the Black Headed Gulls, and an adult Yellow Legged Gull thrown in too. A juvenile Northern Wheatear could also be seen in one of the field south of the pit which heralds for first returning Wheatears and as I walked back to the car I bumped into Mike Alibone again who had just picked up a Black Necked Grebe on the water - I was concentrating so much on the Gulls I had rather stupidly overlooked it when I had birded the area (in my defense it was feeding well and did spend a lot of time underwater). I attended the bird fair on Saturday the 18th of August and while sat in the events marquee I received a few texts from up and coming local bird photographer who had found a female (ringtail) Hen Harrier at Harrington Airfield. So leaving the birdfair rather rapidly Pete Bateup and me found ourselves standing by the first bunker scanning the field - but unfortunately we dipped. I arrived back at Harrington Airfield at 0630 the following morning but despite a 3 hour search we couldn't find it. Mike Alibone had joined me by this point and we decided to head out to Hollowell Reservoir to see what was there. Due to the amount of rain we have had this year the presence of any wader scrapes this autumn is rather few and far between and as Hollowell's water levels have dropped this seems to be the best shoreline around in this area of Northants. It wasn't before we had a couple of Common Sands in the feeder stream and as we walked further along I looked up and saw an Osprey heading in. It looked absolutely beautiful in the mornings sun as it soared around for a while giving amazing scope views, a real shame it didn't go for a fish but you can't have everything. The final yeartick occured last night as I returned to Stanwick Lakes to have another search of the reedbed - unfortunately the tick didn't come in the shape of a Spotted Crake but came in the shape of a very showy Water Rail instead. The current Northants County Yearlist now stands at 161. I have recently learned that the County Record is 201 but that was apparently an exceptional year, so I recon my 161 is fairly respectful considering I work full time and it's only August - the autumn migration has only just started and hasn't really got into full swing yet! Lets hope it does soon!!
Posted by David James at 11:12