The first month of the year is now nearly at an end and although I haven't been out too much, mainly due to it still getting dark very early, my list of birds for Northants is increasing steadily. This year is the first year that I have embarked on a year list, and to keep it local I have decided to keep it all in Northants. I have done this for a number of reasons, firstly as the price of diesel is getting higher and higher the cost of twitches all around the country is getting silly and as I have a wedding to pay for I thought it would be a good idea to limit costs a little, and secondly keeping things local gives you the incentive to look harder at your own local patches. This a lesson I learnt when I did the BTO atlasing for the Finedon area. Here was a site around where I lived, in fact right on my own doorstep, and I am ashamed to say I probably knew more about the birds in Norfolk or anywhere else for that matter than I did these perfectly within walking distance. When I started to become interested in birds I very quickly caught the twitching bug and spent most of my time off tearing all over the place to see rare birds, but the question I have to ask myself is "did it make me a better birder?" and the answer is no it didn't! I had the idea to do survey work when I thought it would be a good idea to put something into the hobby, not knowing at the time it would teach me a valuable lesson in birding. When you are looking for birds on your patch you realise that it can limit what you are going to see so in order to make sure you don't miss anything you go through each bird individually to make sure you know exactly what it is. I see all too often when out birding people will see a flock of Wigeon or Teal wintering on a reservoir and will then walk away happy that they have seen a flock of Wigeon/Teal - what seperates the dedicated birders from the rest is instead of just walking away go through them all methodically, and when you have done that go through them again, and then again from a different angle. This way if there is an American Wigeon or Green Winged Teal in amongst them you will be the one to find it. Anyway I am drifting from the point here a little. Last week a female Scaup was discovered during a WEBS count by a local birder at a place called Wilsons Pits near Rushden. So last Sunday this was the first stop and I am pleased to say I only had to walk 25 yards from the car before I was onto it. Back in the car and then over to Ditchford Gravel Pits in the hope that I would see one of the Iceland Gulls that have been reported. The whole of this complex of pits is populated by horses from the local traveller sites and I think them must be able to smell the extra strong mints that I always carry in my pocket, they certainly seem partial to them anyway. 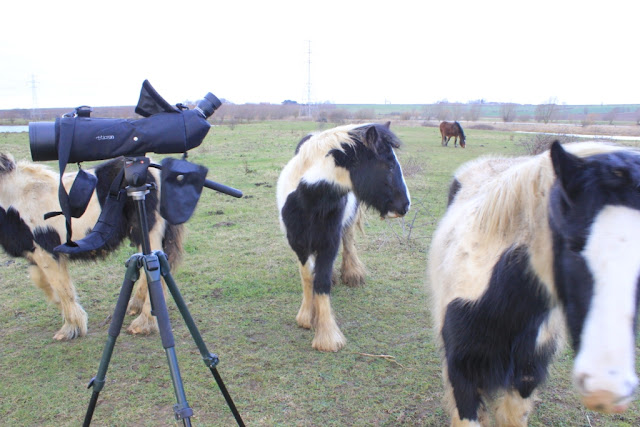 Unfortunately though despite a 3 hour search no White Winged Gulls could be found, in fact some reason the whole place seemed quite barren of birds considering previous trips I had made here. So I had to give in and concentrate my efforts elsewhere. From here I moved on to Barnes Meadow Wildlife Trust Reserve near Northampton. As you may have read in a previous posting this place is a paradise for Snipe and as I had managed to see one not long ago I decided to come back and try for the year tick. The site is a flooded meadow with lots of shallow margins and the technique is to put your wellies on and wade through the mud to see what flies out from beneath you. It can be a bit hairy at times and you can spend more effort freeing yourself from the sticky mud than looking for birds but in a childish kind of way it is quite fun. Again though another let down, despite the fantastic habitat (see pic below) the best I could manage was 2 Common Snipe. 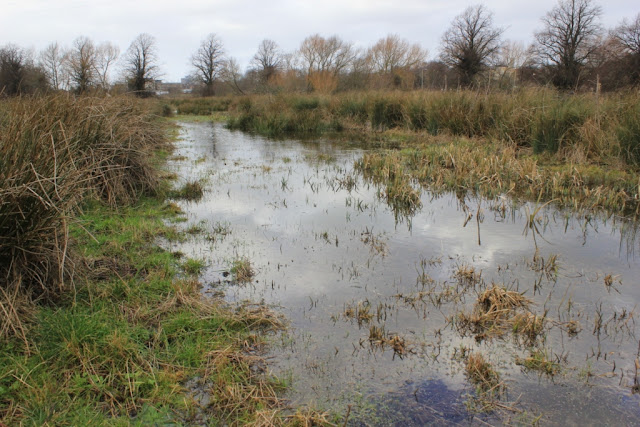 Moving on once again I went over the road and into Clifford Hill Gravel Pits. The highlight here was a pair of Peregrine putting on an amazing display in the wind above the lake. The wind was starting to really blow by now and keeping the scope steady was a nightmare, but I was rewarded with one of the best and most prolonged views I have ever had of these magnificent birds. I had a good look through the vast flocks of geese but nothing other than Canadas or Greylags could be found. I finished the day at Cogenhoe Mill and the surrounding fishing lakes but again couldn't find anything out of the ordinary with the exception of the wintering pair of Green Sandpiper. As I drove home I received a couple of texts alerting me to a couple of White Fronted Geese that had been found at different ends of the county so my next day off (today) I headed to the closest one. This is the bird at Fawsley Park near Daventry. I have to confess this is an area in which I had never birded before and driving through the very quaint villages and countryside made me wonder why I had left it so long to explore this area. I made my way to the park, which is on a country estate, and found the 2 fishing ponds the bird has been seen on. It had been associating with Canada Geese and I did find a flock of these but they were feeding on a hill so any birds down the other side I couldn't see. A couple of very chatty fishermen pointed in the direction I should head for a better view and within 20 minutes or so I was enjoying very good views of the White Fronted Goose as it fed along the bank before flying into the middle of the pond for a drink. 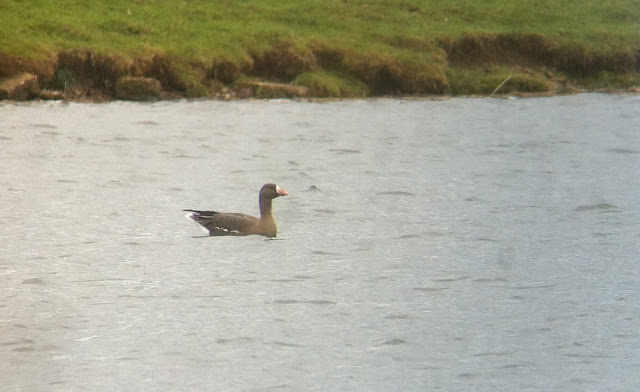 As I walked back to the car I had to admire the area I was standing in, I may very well return at some stage to give the site some birding justice as I think could have spent the whole day here quite easily. The stately home and the church seemingly in the middle of nowhere set amongst the grounds was quite picturesque. 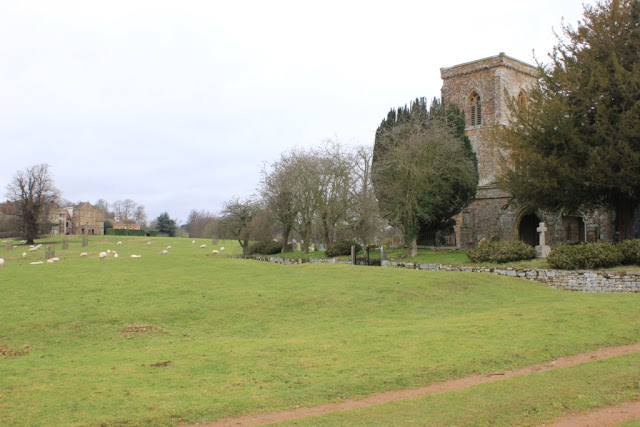 A nice touch at the end of my visit was a Nuthatch calling from the tree above my car, and showing really well in the branches. From here I headed to Pitsford Reservoir in the hope that I may be able to connect with the Brent and Pink Footed Goose. Once again though another dip. I'm not too disheartened though as this can be the trouble with working the hours that I do, with the early dark nights ruling out after work birding and not being able to get out at the drop of a hat! When a bird gets reported you sometimes just can't get there in time. Anyway despite a very thorough search of all the geese flocks south of the causeway I simply couldn't find either of the birds I was after. Hopefully they will re-appear and I will be able to get them again (I have seen them at Clifford Hill last year, in fact it was me who found the Pink Foot but this is a year list at the moment so those birds don't count). I spent the rest of the daylight hours walking around the north side of the reserve. Some fantastic flocks of Teal and Wigeon are here but not much else that I could see. The water levels are very low at the moment and if you look at the picture below the bridge you can see at the bottom of the frame is normally under quite a few feet of water, in fact I can only remember once seeing the water this low and that was many years ago. 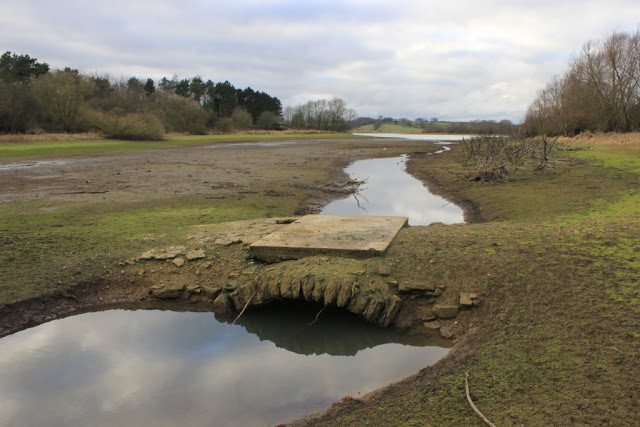 Despite this though I had a nice walk round and as it was getting dark a few of the mammals were starting to emerge. This area is quite large and not too many people venture around to the far end as it's getting dark so perhaps this was giving the local Muntjac Deer population a false sense of security. I counted five in the end with at least 2 of them not paying any attention at all to my presence until I got too close for comfort, and a Hare in the field next to farm near Scaldwell Bay rounded the day of quite nicely. So far the year list has hit 81 different species, all in Northants obviously which can be frustrating as I work in Bucks which means any birds seen down there I can't count, but anyway here is the current list (in no particular order)