The last couple of weeks have been busy! The long awaited summer finally arrived and along with it the butterflies started to emerge. Due to the cold start everything has been painfully slow to happen this year but perhaps this has led to a better appreciation as this time round the anticipation has built up over a longer time. Either way it was good to hear that the Black Hairstreaks had emerged at the Wildlife Trusts Glapthorn Cow Pastures Reserve near Oundle. I headed over as soon as I could and on the 3rd of July I found myself pulling up at the reserve. Despite there being multiple sightings in the previous week they were proving to be hard to get and the low clouds really weren't helping. I waited patiently along with the rest of the crowd by the "morning bush" along the third ride and a couple of fly throughs were the only glimpses of this rare butterfly we could get. One eventually sat right up at the top of a bush giving good binocular views but this wasn't really what I was here for. After a while I became impatient and started to explore in the hope I could find a more showy individual. I ventured along to the next area slightly to the west of the third ride and was immediately greeted by the sight of a Blood Vein Moth obviously disturbed from it's roost and trying to settle down again. In the absence of Black Hairstreak I called some of the others and they came over to take pics, one of them after pointed me in the direction of a slightly gone over Southern Marsh Orchid too.


While we were having fun with these we heard a shout from the third ride that one had come down. Luckily while us impatient ones had left the scene a few Black Hairstreak stalwarts had continued the vigil. Heading around the corner I saw a small huddle of people taking pics and as I got closer a prestine Hairstreak could be seen posing on the leaf infront of them. Now one thing I will say at this point is taking picture of butterflies is frustrating at the best of times, but rare ones even more so as not only do you have to contend with a living thing constantly turning around or flying off but also you may have to put up with the fight to get close enough to get the picture as other photographers don't let anyone else get a look in. I have seen this so often I almost take a deep breathe and compose myself that this is going to happen before I enter a wood on just such an errand. Today though was a very different story I am very pleased to say. When people checked their pictures they did it at the back allowing others a turn before adjusting settings and rejoining the queue to have another go. It turned into a great atmosphere with everyone getting the pics they wanted and having a good relaxed chat at the same time. Obviously the butterfly helped by hanging around for so long but it is a shame this kind of thing is a rare occasion these days. I had to dash unfortunately but I left with the pics I wanted, it's been a few years since I saw one as good looking as this one.

I then had a weeks work to do before my next few days off but as always with wildlife watching you can do it anywhere, including out my van window. I have been keeping an eye on a tree on my route that has had Little Owls in it for years. I see them almost all the time when I am out and I am pleased to say they have successfully bred this year! How do I know? Because today when I went passed two baby Little Owls were looking back at me. Excuse the quality of the pic but it's digibinned through my van window, as I got out of the van to take a better one they disappeared back into their hole. 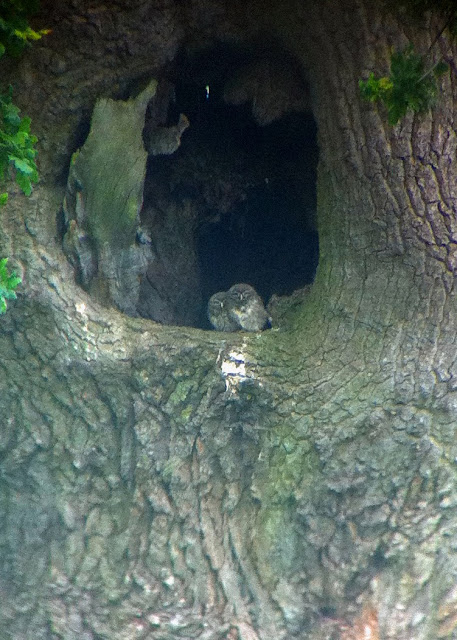 The following weekend was spent chasing butterflies again and on Saturday the 6th I was back in the Glapthorn area with my mate Sam. We managed to see a Cinnabar and Small Emerald Moth along with my first of the year Marbled White, 6 Spot Burnets, and Small and Large Skippers at Polebrook. We also saw a very tatty looking Black Hairstreak at Glapthorn itself. Also at the entrance to Fermyn Woods were greeted by an Emperor Moth Caterpillar.

Then the following Sunday was spent with Jon and Kirsty exploring another Wildlife Trust Reserve called Twywell Hills and Dales. This site actually brought back quite a few happy memories as I walked round. This used to be one of my local patches and the butterflies around here are one of the reasons I started an interest in them in the first place. The Marbled White population here is very impressive and a walk around the site had well over double figure sightings. Unfortunately though the weather was a bit too good and the sun gave them so much energy they wouldn't hang around for pics. Plenty of Large Skippers, Dingy Skippers and Burnet Moths made up for that though, aswell as the four Red Kites in the adjacent field all eyeing up the same dead Rabbit!


The Burnets were particularly interesting as they could be seen emerging from their paper like cacoons on the tall grasses. They were literally everywhere at the north end of the meadow.

A few Common Blue and Speckled Wood were also present and lots of Ringlets could be seen along the hedgerows and also numerous Common Spotted Orchids dotted around the whole reserve.
Due to heat we had a cold beer in a nearby pub and then moved onto a place fairly close to here that I know is good for Orchids. Forgive me for not disclosing the area but it is easy to disturb and the person who told me about it doesn't want me telling too many people. We arrived to find the area awash with Pyramidal Orchids and after a while of searching we found the prize we were looking for with the beautiful Bee Orchid looking amazing in the dappled woodland sun.


The Monday after was the dreaded MOT day for the car. I consoled myself though by having a walk along the nearby river Nene with the camera while it was being done. It was a stunning still summers evening with what seemed like a huge Banded Demoiselle emergence. They seemed to be everywhere and on almost every reed but trying to get close to them was proving a little testing. As with all these types of insect their eyesight is incredible and they rarely allow you to get too close but after a little perseverance I managed a couple of decent shots.

The other insect is real prevalence were Mayflies. These insects have an amazing story as they are only on the wing in their adult form for a day. They are unusual in having two stages of winged form. The first stage I photographed in a previous post but will include here for comparison. You can see how dark it is and the strange posture it is posing in under the leaf.

This is the stage the insect is in when it first emerges from it's larval form from under the water after which they fly up and hide under a leaf while they go through their second moult. Then they emerge into their fully adult stage which is photographed below. I absolutely love this pic, perhaps not the best exposure wise but I really like the fact that it's looking at me showing a little interaction between me and this fascinating little insect as I took it's picture.
The fossil record of these insects goes back 300 million years which of course means the ancestors of the ones you see today skimming the top of a local river actually flew around Dinosaurs. In fact they are the oldest type of winged insect known.

I shall leave this post here. I have a small thrill of excitement running though me though as this weekend is looking good for the Purple Emperor butterfly emergence at Fermyn Woods. They are on the wing in other parts of the country and the weather over the next few days looks very favorable indeed. I intend to spend at least a couple of days there to get some pics so fingers crossed the next post you read on this humble diary will feature photos of "His Imperial Majesty" in all his splendor.