I had the day off work today and after waking found it to be a glorious morning. I've had lots of people telling me about their Chiffchaff sightings so I felt a trip to Stanwick Lakes was called for to try and get some. There wasn't a peep from one last weekend so any birds here must have arrived during the week. Upon arrival I sat in the car next to the iron stone bridge near Irthlingborough and listened with the windows open. 2 Greenfinch were calling along with Dunnocks, Great Tits, Wrens, Blue Tits, Blackbirds and a Song Thrush. I could see quite a few Gulls circling high up on a thermal so I had a scan with the binoculars and a Red Kite had joined them along with another raptor. I watched this bird for a good 10 minutes and as it flew next to the Red Kite the scale it provided showed that it was a Peregrine Falcon very high up. Peregrines aren't that uncommon around here but they are still a really nice bird to see, especially at the start of a walk. On entering the Lakes complex I was greeted by another Dunnock singing from the top of the hedge. 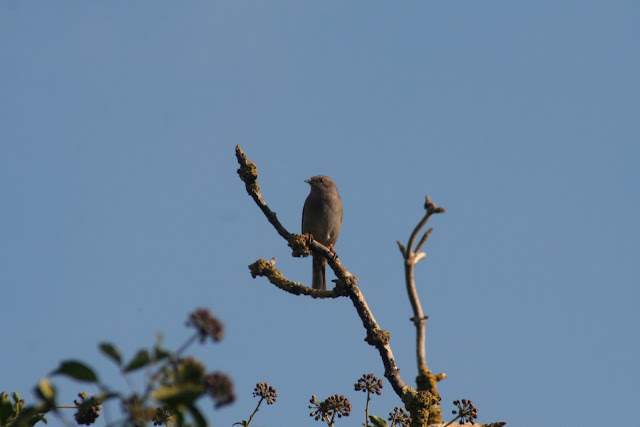 A third raptor species was heralded by a Sparrowhawk being relentlessly mobbed by 3 Carrion Crows as I appraoched the first of the lakes. A Cetti's call exploded from the fishing lake whilst on the lake infront of me a few Tufted Duck, Mallard, Canada Geese, Gadwall and Great Crested Grebe could be seen. Everything is now pairing up nicely and 2 Mute Swans on the opposite bank were already started to build their nest.


The first summer migrant of the day was seen at the aptly named Sand Martin Bridge. This area is incredible during summer and you can stand on this bridge with Sand Martins whizzing around you and you can sometimes find yourself involuntarily ducking out of ones way. Today though just one was there and as it's in this location I'd guess it one of the residents of this breeding colony as opposed to a bird on passage. The Coots are getting amorous too with bouts of fighting taking place all over the area. This bird though deciding to take a little time out from the action going on just around the corner, 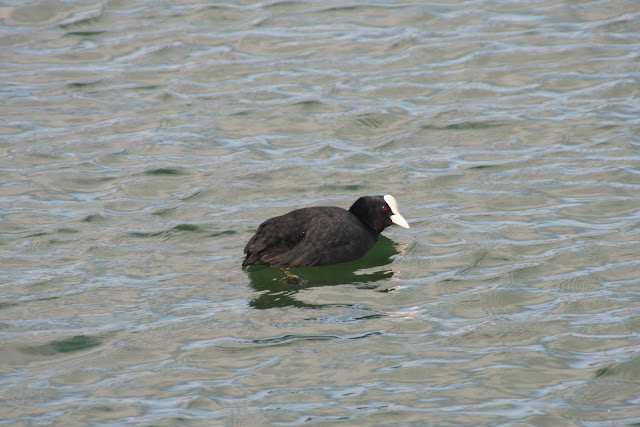 The main lake held pretty much the same as already mentioned with the exception of a few female Goldeneye and 7 Goosanders all asleep under the overhanging branches from the island. Then at last a call came out from the trees behind me and I had secured my first Chiffchaff of the year ( I looked back on last years notes and quite coincidently my first Chiffchaff of last year was seen on the 21st March too). I couldn't see the bird unfortunately as it was right in the undergrowth. A Brimstone was also flying around the bramble bushes as I left to continue my walk round. Also in the small ponds opposite the childrens play area Reed Bunting were feeding on the seeds from the Phragmites.


I headed to the feeding station to catch up with some of the birds seen here last week. If you've read the previous posting you will realise that I get a lot of pleasure from getting very close up views of the commoner birds especially at this time of year when they are all looking their best. A piece of behaviour had been observed last week with the feeding Great Tits. For some reason some birds spread out their wings and arch their backs when another bird comes too close. I have no idea what this is, it is either a threat display due to territory or it may just be trying to guard its food supply. Despite numerous attempts I couldn't get a clip of the bird doing it but I did manage a still photo with it wings splayed out. 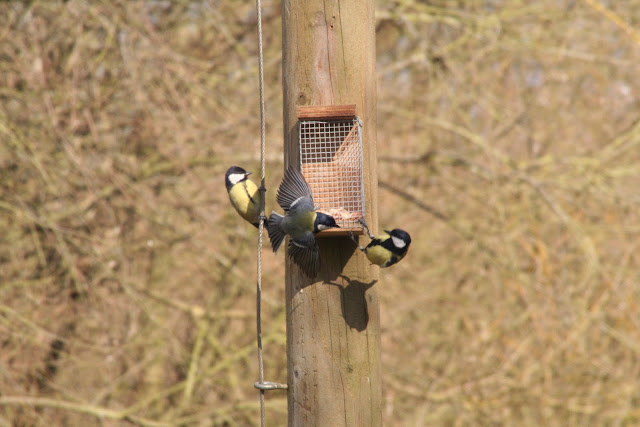 If anyone does know what this means please do let me know. Another nice bird was a male Great Spotted Woodpecker that had been drumming away whilst I was observing the Great Tits. It took a break from drumming to come down and feed on the peanut feeders so I managed a couple of shots and a short clip before it flew back up to the trees. 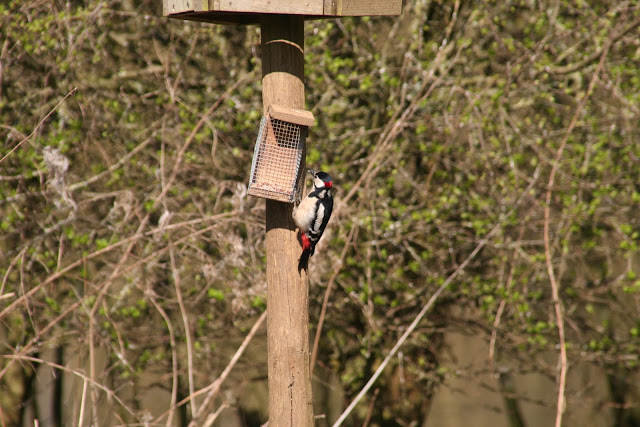 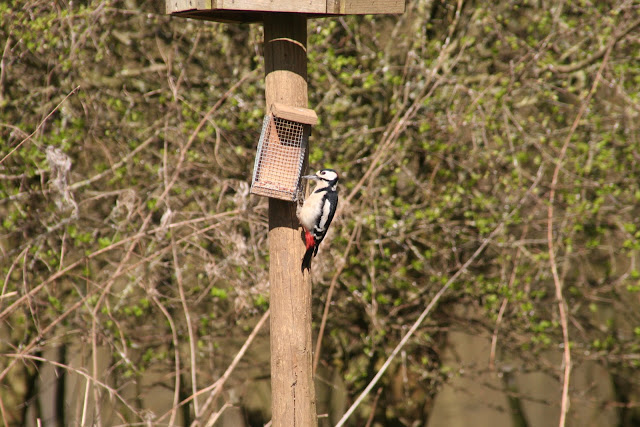 I continued my walk around the site enjoying the birds and the sunshine. A Kestrel came out from the trees and started to circle up to a thermal and within a minute it was just a tiny dot in the sky. More Chiffchaff could be heard around the lakes with one showing really well in Willows next to the green lane which leads up to the Raunds entrance. No Little Owl could be seen in the dead Willows near Mallows Cotton (an abandoned medieval village) which does make you wonder if they have survived the harsh winter as I know that Steve and Bob haven't seen them either. Back up onto the old railway line and several Bullfinch were taking advantage of the bountiful supply of buds. Its a really good time of year to see these birds as they seem to be more concerned with filling their bellies than being their usual secretive selves. The way back was marred slightly by a sad story. The wardens have been building an Iron Age roundhouse, and they have been enlisting the help of children from surrounding schools to help them. I have watched grow with interest and I have seen first hand the pleasure it had brought to many children throughout it's construction. Last week the thatching of the roof was nearly drawing to an end and the final piece to the top was all that needed to be done but as it was getting dark they downed tools so they could complete it the following day. Just hours later vandals had set it on fire. I just cannot comprehend what goes through these peoples minds when they carry such an act out, and the disappointment it must have caused to so many people who played a part in it. All I can say is I hope they catch them. 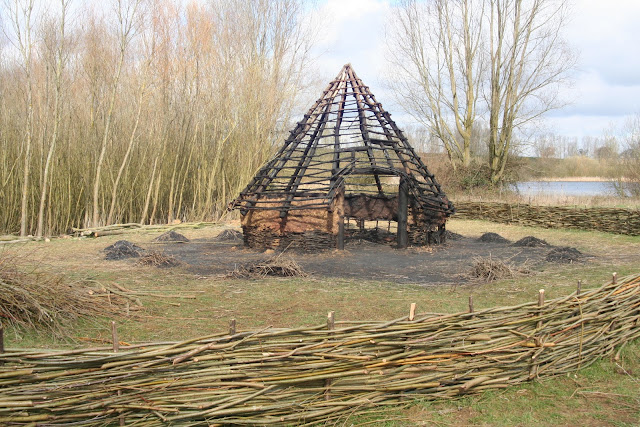 I continued my journey back towards my car. A few Skylarks were heard singing away above the fields to the north and on the car park lake 2 Great Crested Grebes were starting their courtship display to each other.

Then almost back to the car the scratchy call of Sand Martins could be heard and 2 birds flew overhead. I'd managed a final tally of 5 Chiffchaffs, also 5 Cetti's were heard to call too with one bird signing right out in the open in the area west of the assault course. It was a brilliant day to be out with the sun shining and the birds signing. Spring is just around the corner and I'm already brimming with excitement.
Posted by David James at 20:59